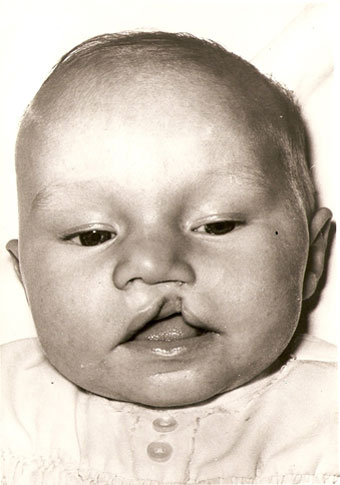 A couple of months ago I met with Karl Murphy. A 38 year old from Merseyside who has spent the last six years campaigning against a multinational drug company that he alleges left him damaged from birth. Karl was born with a cleft palate, harelip, no fingers on his right hand, a damaged left hand, no toes on his left foot, a toe missing on his right foot and an undeveloped hip.

His mother was given the drug Primodos as a pregnancy test in 1972 and nine months later he was born on February 20th 1973. ‘The drug was given to my mum on two occasions,’ he told me. ‘The first time she miscarried and the second time I was born deformed.’

When we met, Karl and his mother Pamela came prepared. They took out six and a half individual strips of tablets with each one each containing 21 contraceptive pills and laid them out on the table. ‘It was like all these tablets were being taken in 12 hours,’ explained Karl. ‘The dosage that was in Primodos was equal to 157 contraceptive pills or, to put it another way, 13 “morning after” pills.’ 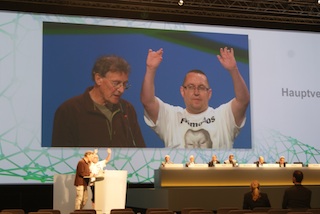 Karl at the Bayer 2010 AGM in Cologne with CEO

Primodos was used as a pregnancy test from the early 1960s through to the late 1970s and was manufactured by the German company Schering which was later taken over by Bayer. Bayer strongly denies the claims of Karl and others, here and abroad. There are some 30 families in the UK and more than 380 in Germany alleging their children, now adults, have been harmed by what has been called ‘the forgotten thalidomide’.

There were first warnings about Primodos from the Committee on Safety in Medicines in 1975 and Schering withdrew the drug three years’ later. However a legal action against Schering ended in 1982 when the claimants’ legal team, with the approval of the court, decided to discontinue the action on the grounds that there was no possibility of showing that Primodos caused the defects alleged.

Earlier this year Karl Murphy’s lawyers were awarded legal aid to further investigate whether new medical evidence is enough to establish a case in the UK courts.

You can see a film by Sky News about how Karl discovered a stash of medical documents. German journalists from Stern magazine left the paperwork with his mother after a visit to the family in the 1970s including internal confidential correspondence at Schering from 1967 linking birth defects and the drug. His mother had put them in the loft where they remained forgotten and unread for 30 years. Sky interviewed the original authors.

Bayer has had ‘extensive contact’ (as their spokesman put it) with Karl in the past two years (‘including his visit to the Bayer AGM in 2009, 2010 and 2011 in Germany’). Karl also ‘collared’ (his words) the company’s head of communications at the Bayer 10K fun run in Newbury and handed over his own dossier of evidence on the drug. He refused to take it. Meridan TV filmed the confrontation.

I spoke with Karl today. Since our last meeting he and his lawyer (Peter Todd of Hodge Jones & Allen) have arranged to meet with Bayer. Karl doesn’t want to comment further on the case until the meeting has taken place.

Bayer’s line is that the ‘current state of knowledge’ indicates ‘that there is no association between the hormones contained in Primodos and congenital deformities of the type alleged by Mr Murphy’.

Our legal system is shockingly weighted in favour of the pharmaceutical industry and against those alleging to be damaged by its products. Earlier this year a legal action involving 100 families seeking compensation on behalf of a range of birth defects (spina bifida, heart damage, cleft palates, deformed hands and feet etc) failed in their action against the manufacturer of anti-epilepsy drug Epilim failed. Such families rarely get to see the inside of a courtroom.

The Epilim families did make it to the Royal Courts of Justice in February but only to notify the judge that the legal battle was over. Not, as they put it, ‘because we have lost our fight but because continuing without legal aid would place our clients at too great a financial risk’. You can read one mother’s frustration with the system here.

Epilim joins what we called ‘a dismal roll call’ of failed group legal actions in The Justice Gap: Whatever happened to Legal Aid (Steve Hynes and Jon Robins, Legal Action Group, 2009). This includes the 2002 oral contraception pill (OCP) litigation, which dramatically fell apart last year following 44 days of legal argument and the contributions of 10 epidemiologists; the failed Norplant contraceptive litigation; an abandoned attempt to take on the tobacco companies in 1999; and the notorious benzodiazepine tranquilliser cases which devoured £30m of taxpayers’ money without seeing the inside of a courtroom.

The fate of the UK Vioxx litigants is seen by many as a indicative  of the David and Goliath battle that litigants face. In November 2007 the manufacturer Merck announced plans to pay more than $4.85 billion to alleged American victims of the anti arthritis drug who claim to have suffered heart attacks and strokes as a result of it. It is reckoned to be the biggest settlement of its kind.

UK claimants took their legal action to Merck’s backyard in New Jersey bypassing the UK courts after having been denied legal aid. However the US judge ruled against the UK claimants towards the end of 2006. The UK had ‘a perfectly appropriate judicial system’, argued Merck’s counsel. In fact, the UK courts were more appropriate than New Jersey because the plaintiffs lived there, they were prescribed their medicine there, they ingested it there, they were treated there, their medical records were there and their physicians lived there’.

Tight controls have been imposed for such complex product liability cases as a result of what the Legal Services Commission, which runs the legal aid scheme in England and Wales, has described as the ‘bitter experiences’ of cases such as the benzodiazepine tranquilliser fiasco. By direction of the Lord Chancellor, there is only £3 million available for major multiparty actions and litigation is subject to an annual affordability review. Drug companies will spend tens, if not hundreds, of millions in research and development and so spending £10 million isn’t a problem. Marc Weingarten, one of the American lawyers who has been advising the UK Vioxx litigants in the US, told me that individual expert reports alone can run into ‘tens and 20s of thousands of dollars’. What did he make of the £3 million budget available for all UK class actions, I asked. ‘That is not a lot of money,’ he replied.

The government’s programme of legal aid cuts – it is planning to remove £350 million from the £2.2 billion total budget – look to make a bad situation even worse. However a lack of legal aid has meant that they have been pretty much off-limits for the last decade. That supposed magic panacea of ‘no win, no fee or conditional fees is a non-starter. Insurers won’t touch these cases when sums like £10m are small change for multinational defendants.

‘If legal aid had not been granted then all the victims of Primodos would have been forgotten and brushed under the carpet again,’ said Karl Murphy earlier this year. ‘We deserve justice for all the misery these victims have endured. A lot of us are deformed in many ways. Some are bedridden and need constant 24 hour care.’

One response to “Taking on big pharma”

Norway set to decriminalise personal drug use
Home Office challenged over ‘shameless profiteering’…
Number of prisoners with drug problems more than…
Freedom and a tent: the sorry cycle of prison and…
'Shamima Begum should be made to face British…