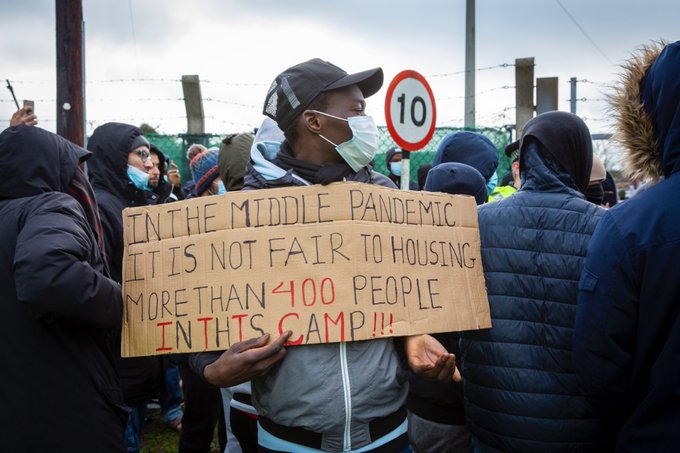 Over 350 asylum seekers being temporarily housed in a former army barracks in Kent have gone on hunger strike to demand ‘basic human rights’. The Napier barracks site near Folkestone has been home to around 400 men since September 2020, most of whom are awaiting information on their asylum claims and are struggling to access legal support.

On Tuesday afternoon, around 100 residents stood outside the barracks in protest, some holding banners warning of the dangerous conditions and government inaction. They were met by dozens of police officers who formed a line in front of the peaceful protest. The photographer Andy Aitchison was present.

Asylum seekers currently held inside Napier Barracks staged a peaceful protest outside the entrance to the barracks with banners and signs to demonstrate about the poor conditions they are subjected to inside the holding centre on the 12th of January 2021, Folkestone Kent. pic.twitter.com/4BsX6lqDGK

Fears of COVID-19 have been sparked amidst unsanitary conditions and overcrowding in the barracks. Speaking to The Guardian, volunteers raised concerns about the unhygienic state of the accommodation, with some rooms being occupied by 15 people at once. Videos filmed of the bathrooms show broken toilets and out of order sinks. Care4Calais founder Clare Mosely described the conditions as ‘cramped, stressful, and dangerous’, with medical professionals having previously called for the site to close. Four residents have reportedly attempted suicide over the past four days.

In another act of protest, some residents have started sleeping outside in freezing temperatures. ‘They feel it’s the only way to have their voices heard’, said one volunteer. In response, a Home Office spokesperson commented that, ‘there is no reason to sleep outside as we, at the taxpayers’ expense, provide those at Napier Barracks with safe, warm, Covid-compliant accommodation.’ Regardless, volunteers are reportedly being denied access to the site due to a high number of COVID cases.

Located behind barbed wire and high fences, residents have reported feeling criminalised and cut off from the community. ‘It’s a military setup here’, one Sudanese asylum seeker told the BBC. ‘It’s like being in prison. You can’t do anything without someone knowing. Everything you do is watched.’ Mental health experts have condemned the use of army barracks as housing for people who have fled persecution, voicing concern that the military environment will trigger trauma for those who may have been detained in similar environments in the past.

Speaking to the Morning Star, one volunteer said ‘the most shocking and sad thing is these are the most resilient people, they’ve been through so much in their past, and it’s here in Britain that they are losing hope.’

Napier barracks has drawn strong criticism from rights groups for its use of the Official Secrets Act, legislation usually reserved for issues of national security. Upon entering the site, run by a private company on behalf of the Home Office, volunteers are required to sign a confidentiality agreement carrying criminal penalties for any breaches. The agreement prevents volunteers from disclosing any information about the ‘service users’ at the site. Bella Sankey, director of Detention Action, said that the Official Secrets Act is intended ‘to protect state secrets and national security, not the government’s treatment of people who have arrived in the UK seeking sanctuary’.

The protests come as the Home Office faces legal action over its plans to expand the capacity of Yarl’s Wood immigration detention centre by erecting a ‘prison-like’ portacabin site on the premises. Lawyers argue that the Home Office has ‘failed to carry out required social and environmental risk assessments, critical to protecting the wellbeing of individuals and the community.’