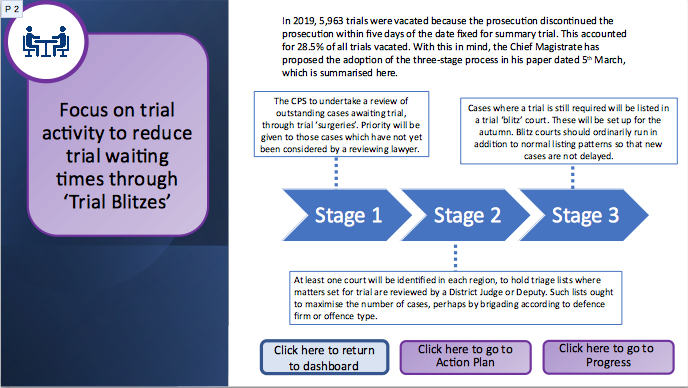 An ‘ambitious but achievable’ plan from the court service and judiciary to restore court listings to pre-pandemic levels by the end of the year will rely on ‘trial blitzes’. ‘We will aim to sit as many benches of three as we can by mid-May,’ reads the document seen by the Justice Gap. ‘This will be enabled by the increased use of plexi-glass, and the national vaccine programme.’

A national task force has been set up to oversee delivery of reforms which are set out in a document called The Magistrates’ Criminal Courts 5-Point Plan: Recovery Ambitions for Adult & Youth Courts to work with regional task forces across the country. There is an expectation that courts will return to in-person hearings as the regional task forces discuss with court users whether personal attendance will assist the efficiency of dealing with court lists.

According to the plan as more than eight out of 10 magistrates (82%) are aged over 50 years ‘they will have been offered a vaccine by mid-April, and those vaccinated should have developed a good level of immunity by mid-May and be less likely to transmit the virus to others’.

According to the document, screens should have been installed in 376 courts by the end of last month with further funding for more. Rotas for magistrates from April through to September have been drawn up on the basis of benches of three.

In the eight-week period leading up to Christmas last year, the magistrates’ courts received an average of 22,004 cases each week and disposed of 24,807 cases. The plan envisages an improvement on listing and disposal rates compared to before Christmas where the total volume of outstanding work on December 20, 2020 was 466,445 cases. This rose to 477,811 by the end of February 2021.

The plan scraps the ‘Interim charging protocol’ introduced in April last year in response to the decision to suspend the listing of non-urgent bail cases. It reports that ‘at least’ 16 police forces are still operating under the protocol. The national task force will work with police to reduce the number of youth offenders whose first appearance is before an adult court.

Under the autumn ‘trial blitz’, the CPS will review cases awaiting trial and matters set for trial will then be reviewed by a judge in each region. Only those cases where a trial is still required will be heard in ‘blitz’ courts. The regional task forces will devise a plan for additional courts and sessions, including opening courts on Saturdays,  to clear the backlog. Saturday courts were already in use prior to Christmas but the plan intends to increase the numbers of courts with some regions using evening or weekend sessions. The plan says that ‘no additional courts should be listed without prior engagement with the agencies that are likely to be affected’.

Under the plan, additional Single Justice Procedure sessions (i.e., where defendants have their case decided by a magistrate without going to court) will take place between April and June. Penelope Gibbs, founder of Transform Justice, told the Law Society Gazette, SJP charges are sent out ‘via snail mail, no one knows if defendants receive them, most defendants do not respond and they are then convicted in their absence by one magistrate sitting alone at home’.

Additional Saturday courts ‘should wherever possible avoid the need for additional duty solicitors, probation officers, or dock cover. No additional courts should be listed without prior engagement with the agencies that are likely to be affected’.

'All hands to the pump': courts to extend hours to clear 10…
Suspects to spend longer in custody to help courts backlog,…
Courts backlog increasing before pandemic and will be a…
Right to trial by jury could be restricted to ease pressure…
Judge blocked from hearing a case after criticising…