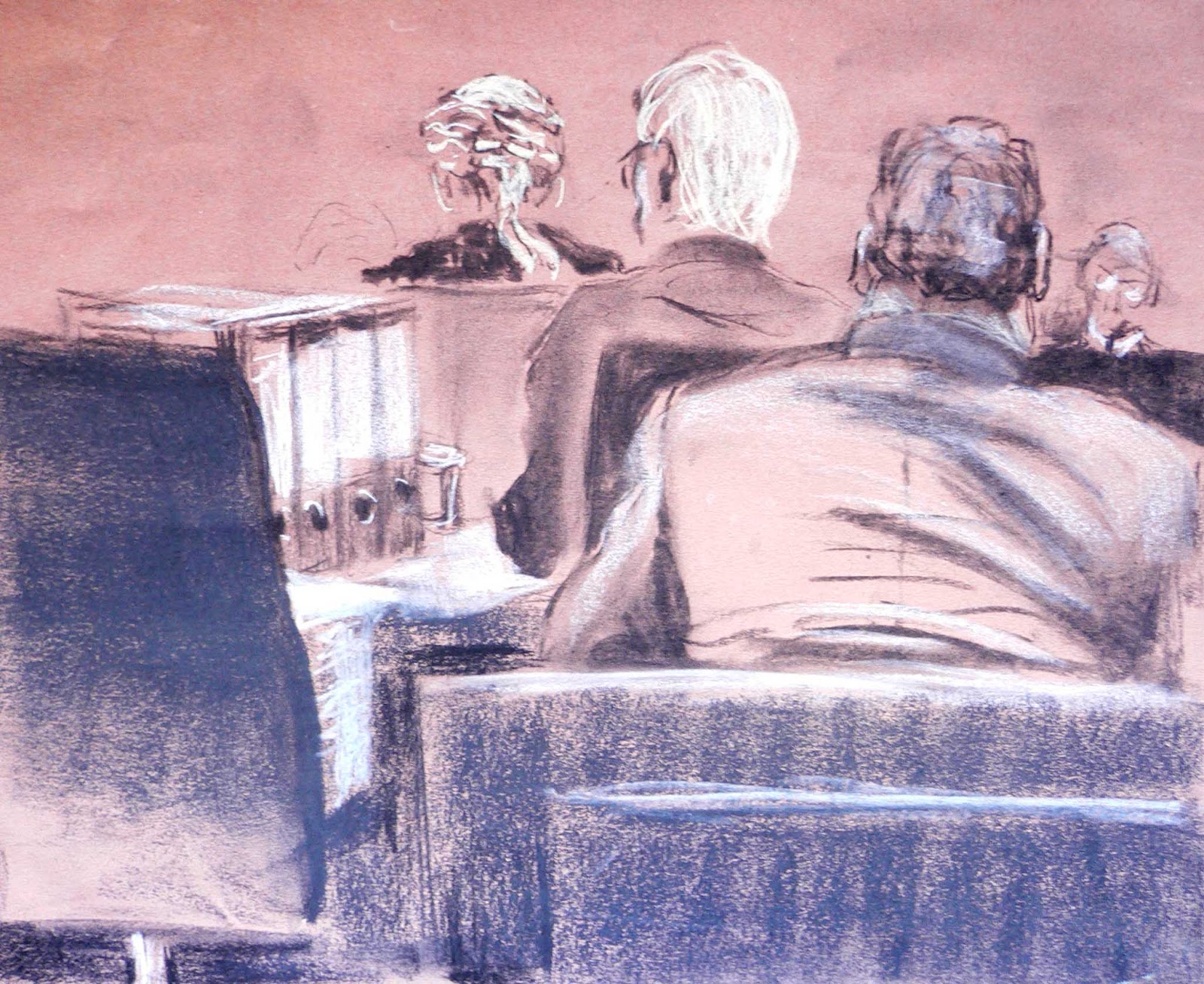 I explore the gunge in the waste disposal to retrieve the tiny pipette I use to fill a plastic brush-pen with ink. I take the wrong bus. Then I miss the right bus because I’m looking in a shop window, writes Isobel Williams.

It’s just as well the administration of justice isn’t in my hands – literally, as I forget my gloves have metal studs and they set off the security alarm at the Supreme Court. 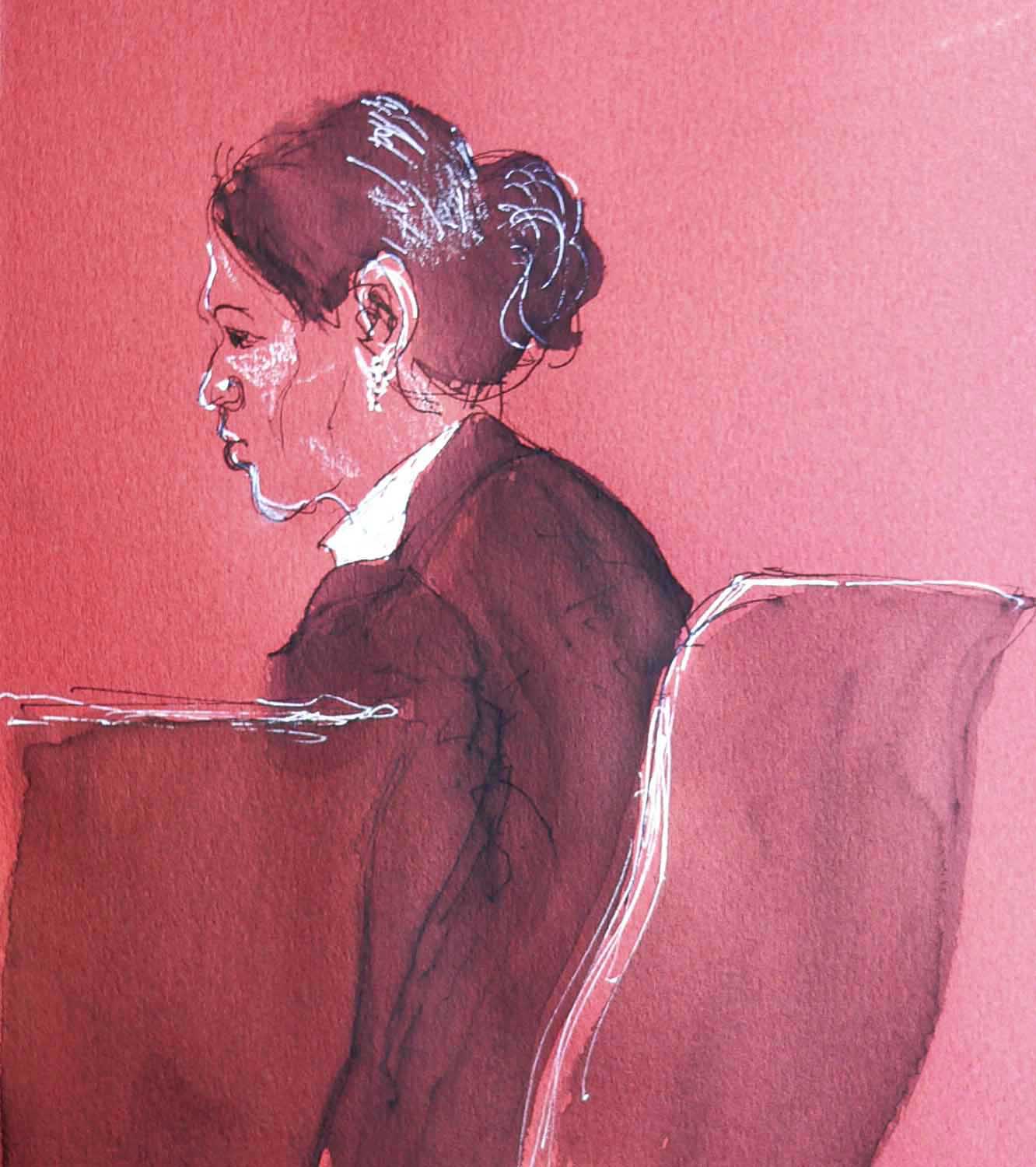 From the Privy Council to a squat
I sit in on the Judicial Committee of the Privy Council for a nice rest. The court setting aims to give the five law lords a Mount Rushmore prominence, but from the back row their heads are the size of beads. Lesage v the Mauritius Commercial Bank Limited concerns fraud. Mauritian law appears to be an awkward fit of the Code Napoleon and English law. The case has squeezed through the gap to get to London.

A regular supply of tourists come and go. They last a few minutes in the public seats, then negotiate silently with each other about when and how to leave.

I think I’ll settle into the rhythm of drawing after lunch. But when the break comes I learn that squatter-activists, including people from Occupy, are heading to the Royal Courts of Justice for an eviction hearing. I arrange to go there with a client who’s writing a newspaper article about squatting. 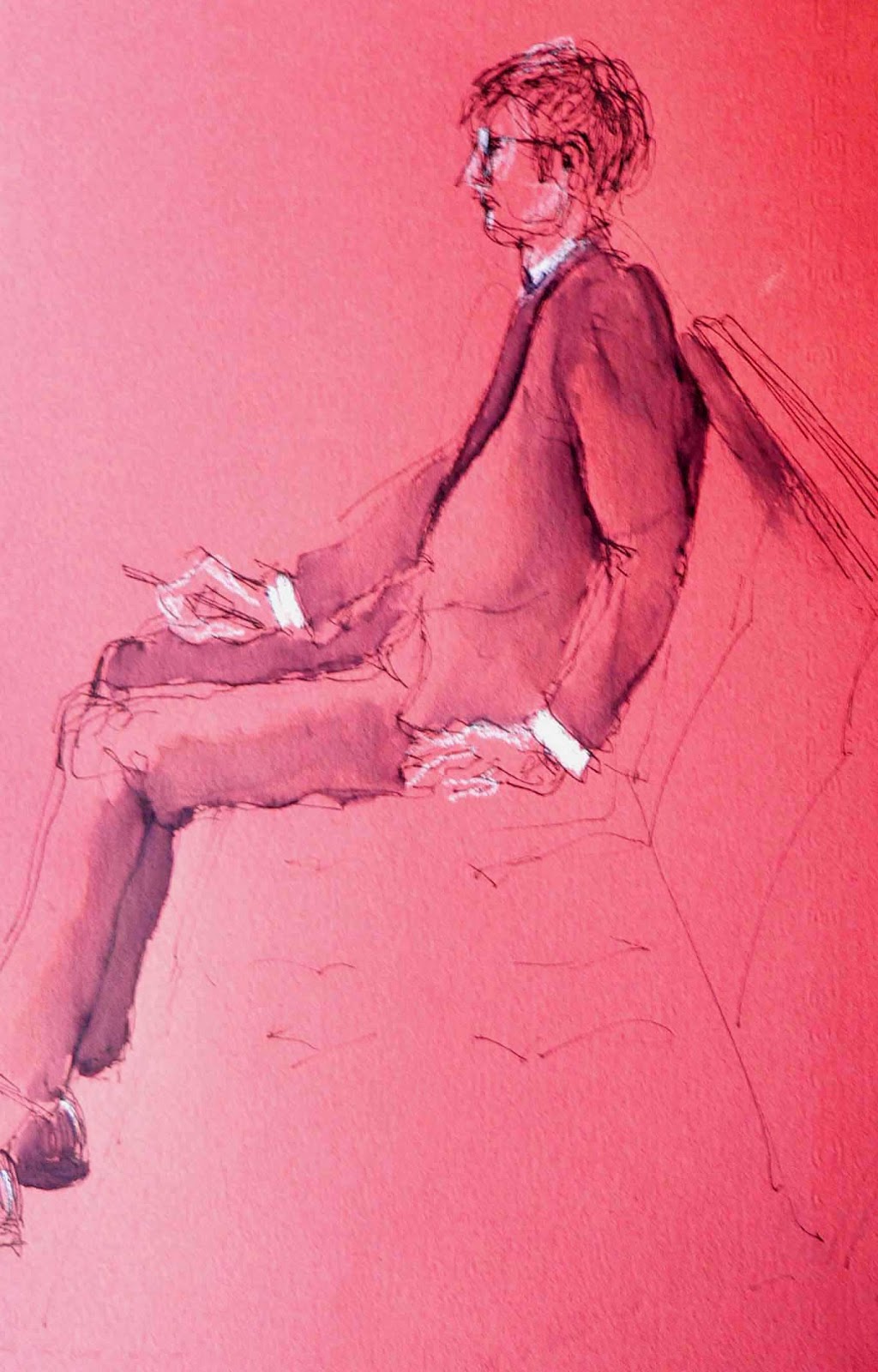 As I leave the Supreme Court, I’m stopped by a security guard.

‘You’re the one who does the drawings, aren’t you!’
He beams at me. Poised. Well-made face. Interesting highlights on the skin.
I promise to draw him next time.

No drawing is allowed in the Royal Courts of Justice.

People are too easily intimidated by a courtroom setting. Why say ‘Not at this precise moment in time, my lord’ instead of ‘No’? Even so, the hearing is brief.

The activists cluster outside for a smoke, oblivious to the designated smoking area a few yards away.

‘Look, man!’ Someone points down at the formal black shoes he has worn for the courtroom. ‘My feet just ain’t that shape!’ 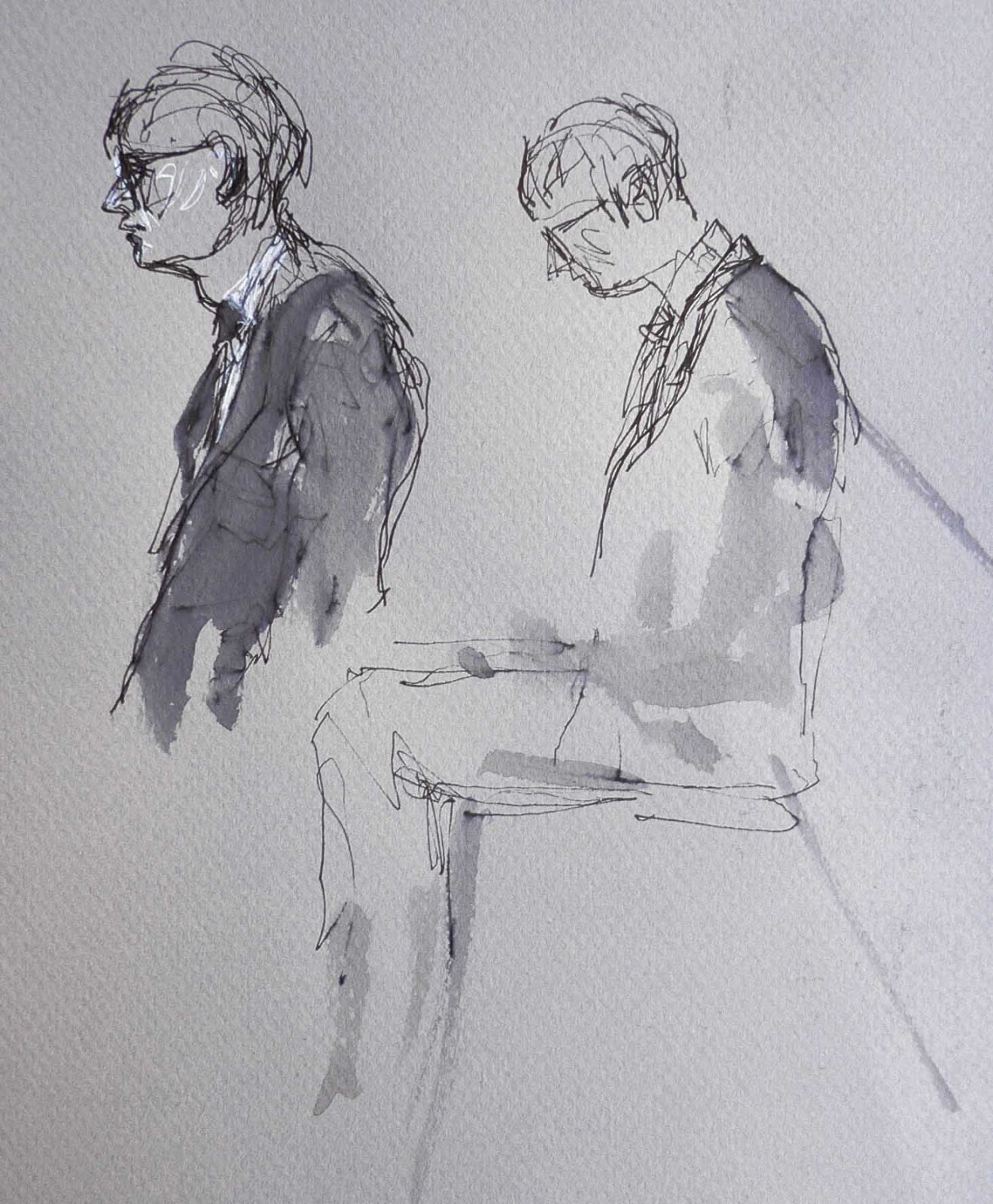 ‘Excuse me!’ A solicitor for the claimant is exasperated by the smokers blocking her way. ‘Honestly!’ she sighs to her colleague as she tittups away in high-heeled boots that are not the shape of human feet.

We head for the squat in High Holborn, which has been empty for 11 years and is theirs for at least 72 hours more. They are hungry. There is dried pasta but nothing to eat with it. Yes there is – some sandwiches retrieved from skips outside supermarkets. They talk about using sandwich fillings to make a sauce.

I’m too tired for drawing, the atmosphere too jumpy.

I go home, break a plate and cut my finger open on it. They’ll find another squat. 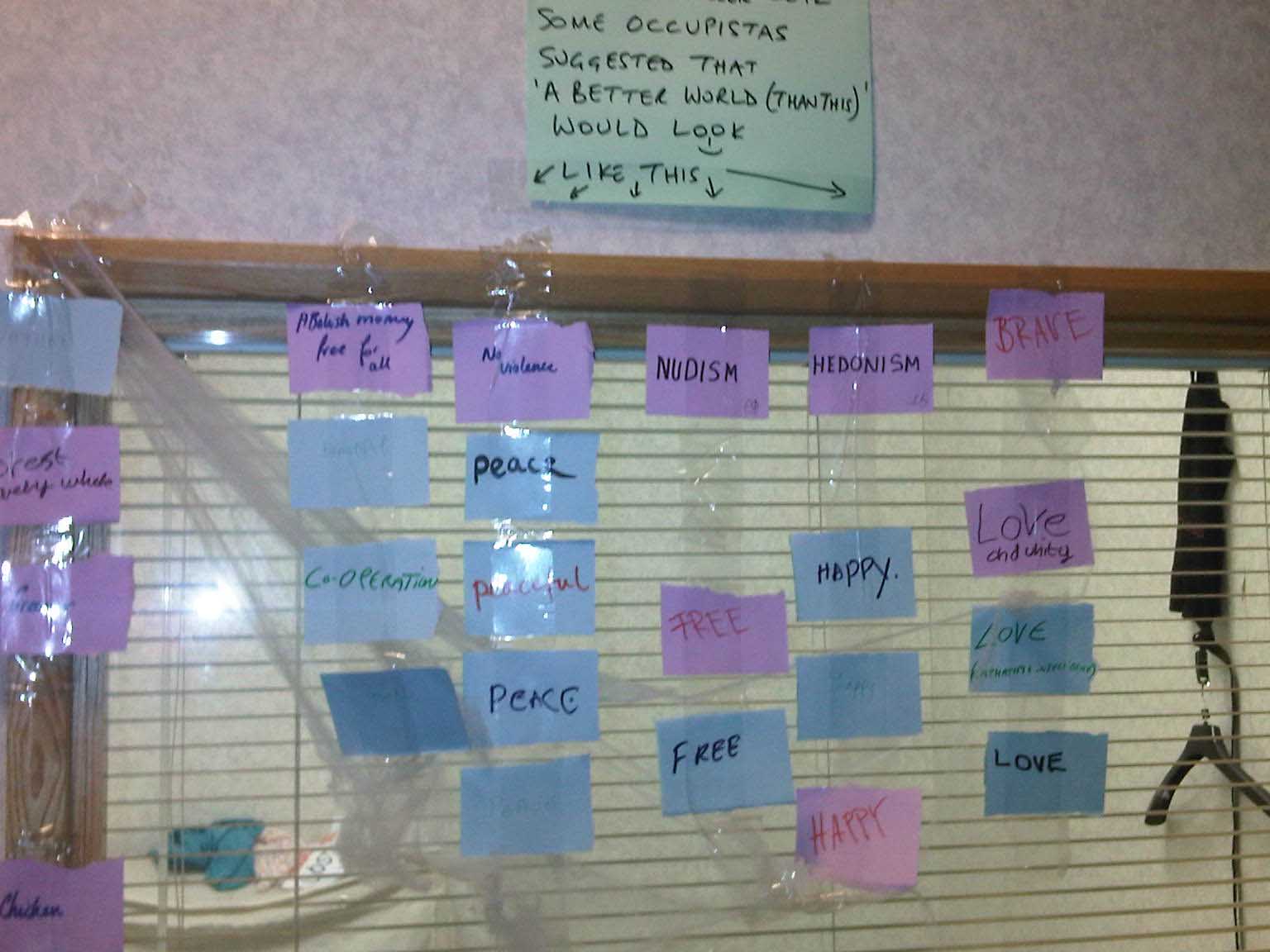 Judge blocked from hearing a case after criticising…
Met accused of 'institutional racism' over Robyn Williams…
Right to trial by jury could be restricted to ease pressure…
Covid-19 update: Jury trials to resume from next week
'British judges quit Hong Kong bench. What took them so…