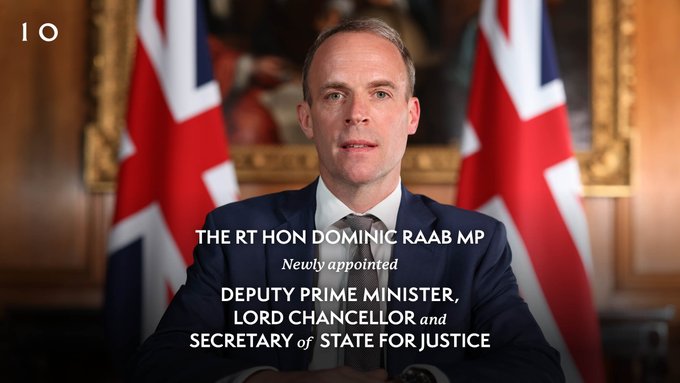 Years after Brexit upset the UK’s constitutional applecart, the apples still continue to tumble down. Over the course of the last two years, we have seen the prime minister attempt to forcibly prorogue Parliament, try to fetter the power of the courts to hold the government to account, and candidly pass legislation that candidly violates international law, to name but three. Throughout much of Johnson’s premiership, this constitutional turbulence has been overseen by Robert Buckland, the Lord Chancellor, who, whether through expressly defending the government, or by simply remaining in post, lent his imprimatur to the government’s behaviour.

Given this, it would not be unreasonable to accept, if not celebrate, Buckland’s dismissal from the Cabinet. After all, if you are at the stage where the government is trying to intimidate the courts into compliance and feels free to ignore international law, the depths which a liberal democratic government can plumb must be reaching bedrock. Yet we should be careful. Buckland may have been executive-minded in his legal philosophy, but there was a general sense that he was one of the few adults sitting around around a Cabinet table that included (and continues to include) the likes of Priti Patel and Jacob Rees-Mogg, and that there was a limit – eventually – as to how far he would see the UK constitution degraded and diminished.

With Dominic Raab, who has replaced him as Lord Chancellor after being demoted from Foreign Secretary, it is possible – if not probable – that there is no such limit. In theory, Raab should be an ideal candidate for the post. Educated in law at Oxford and Cambridge, he trained as a solicitor at Linklaters, where he was seconded to Liberty, the human rights organisation, before moving to the Foreign Office, where his brief included working on war crimes at the Hague.

You would expect all of this to have led to a politician who was aware of the importance of human rights and of the need for a government to respect, rather than to pillage constitutional norms and conventions. But instead, we have Raab the rights-sceptic, a politician – and now a Lord Chancellor – who is deeply critical of human rights and hostile to the institutions tasked with defending them, including the European Court of Human Rights at Strasbourg. If there was any doubt as to this hostility, Raab’s speech at the Conservative Party Conference should have swept them aside, as he promised to ‘overhaul’ the ‘nonsense’ that is the Human Rights Act before the next general election.

Doubtless, Raab would argue that he is not sceptical of rights per se, but rather, sceptical of the modern conception of rights that evolved in the latter half of the 20th century. Before being elected to Parliament in 2011, Raab – then an advisor to David Davis MP – wrote The Assault on Liberty, billed as an ‘urgent and necessary polemic on the government’s assault on our fundamental freedoms and the proliferation of Human Rights’. Here, Raab oxymoronically frames human rights as being used as a tool of oppression, not as a way of checking government power, but of enhancing it. Yet while he waxes lyrical about the manifold ways in which the government is allegedly trampling upon civil liberties, whether through surveillance or through DNA databases, he fails to recognise that it is his bete noire, the courts, that have done much to check such intrusions, such as when the ECtHR regulated the UK police force’s collection of DNA data in Marper v UK.

Raab’s philosophy is not entirely incoherent, but it is myopic and archaic, and in rooting itself purely in the ‘classical liberal’ philosophy of thinkers such as Mill and Locke (but without any of the subtlety that pervades their thinking), it ignores the reality of the modern world- a sentiment that the courts are rightly unwilling to share. If Raab was to have his way, the courts would be limited to protecting a purely negative conception of liberty, with few, if any positive obligations placed upon state governments, while Strasbourg would not be able to expand its jurisprudence into areas of ‘social policy’ that, in his view, are for the government of the day and its legislature to decide. Nor would rights be extended to those that Raab seemingly deems ‘undesirable’, with his polemic bemoaning the fact that the courts have come to the defence of groups like prisoners, who have the audacity to be ‘legally represented at Parole Board hearings’ and to have ‘recourse to judicial review’.

To this end, his speech at the conference took aim at a decision from 2011, with Raab blaming the HRA for allowing someone ‘guilty of domestic abuse could claim the right to a family life to trump the public’s interest in deporting him’. Inevitably, much like Theresa May’s infamous example of how a pet cat was also used to stop a deportation, the example had a tenuous relationship with truth, with the actual circumstances being rather more nuanced than was politically expedient. Not only was there rather more sympathetic evidence put before the court than Raab was willing to admit to the party faithful, but the immigration rules that stopped the deportation in that case have since been overhauled.

All of this means that we now have a Lord Chancellor who is deeply hostile to the modern role of the courts in the UK, and to their role in protecting both human rights and the constitution. While arguing that we need to ‘work to resolve’ the problems in British democracy by strengthening the role of Parliament, Raab condemned the decision of the Supreme Court in Miller I, arguing that the Supreme Court had ‘ignored’ the decision of the British people. Not only does this criticism reveal a troubling lack of understanding about the nature of the justices’ decision, but a lack of understanding as to how the problems in British democracy can be redressed. Anyone concerned about Parliament’s decline should have celebrated the Miller decision as one that emphasises its dominant role in the British constitution. Raab’s unwillingness to do so shows how easily he is is willing to forsake principle for partisanship.

With the UK having left the EU, part of Raab’s desire to see ‘Britannia unchained’ from the shackles of social democracy, and transformed into a pure market society like that of Singapore has been achieved. As I have written before, the next target in this government’s sights was always likely to be the Human Rights Act, if not British membership of the European Court of Human Rights. Under Buckland, progress had already been made towards this, with the government’s review of the HRA still ongoing, and it seems entirely likely that in accepting the lord chancellorship, Raab will have insisted on the government redoubling its efforts here. Whether this means we see more apparently benign procedural reforms, intended to stymie human rights claims at their root, or more dramatic changes, such as revocation of the HRA in favour of a more minimalist ‘British Bill of Rights’ is impossible to say – even if it now seems unlikely that the government is going to opt for wholesale withdrawal – but reform is coming.

Much like the reshuffle earlier in September, the Conservative party conference has revealed little about policy, but much about the party’s ambition. Then, figures were moved around – or off – the Cabinet table not based on ability but on their popularity, and this week has seen ambitions announced not on the basis of some overarching belief in conservative values, but on the basis of what the government thinks the people want to hear, and so – Johnson hopes – what will keep him in Downing Street.

What will likely be crucial to this success will be another bogeyman – and here, the ECtHR and the HRA are ideally placed. Not only do they take advantage of the Euroscepticism still prevalent in the Conservative base, but they allow the government to take advantage of the longstanding narrative that human rights do nothing for ‘the people’, and everything for illegal immigrants who own cats or abuse their partners.

'One person's politics is another's law. It's not up to the…
Government response to Faulks review ‘cover for sweeping…
Stepping up to the mark
'It's not difficult to see why Jacob Rees-Mogg is so…
'Disaster constitutionalism' and breaking the law in a…