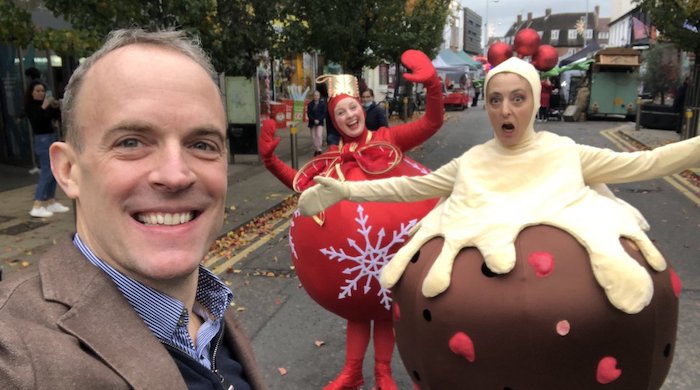 Little sums up the government’s attitude to the criminal justice system more than the selfie posted by the Lord Chancellor, Dominic Raab, to Instagram this weekend. In it, he offers a rictus grin to the camera, with two roller-skating Christmas puddings gurning behind him. If Raab was an ordinary backbench MP, this could be laughed off as one of the necessary, albeit humiliating, ordeals that MPs, particularly those in marginal seats, must subject themselves to. But the Lord Chancellor is not an ordinary MP. He occupies one of the great offices of state, and while having obligations to his constituents, he also has obligations to the office.

These were obligations Raab dispensed with this weekend, preferring to attend the opening of his constituency’s Christmas fair than to deliver a speech to the Criminal Bar Conference, and to engage with the barristers and solicitors who are, Atlas-like, trying to hold up the criminal justice system. And while Atlas may be divinely willed to hold up the earth for eternity, criminal lawyers have no such support, with the system coming closer to failure with every passing year.

Criminal justice was already in crisis prior to the pandemic. The cuts inflicted upon the system, beginning under Cameron’s premiership, and continuing under May and Johnson, have devastated it, with prisons overcrowded, lawyers exhausted, and trials delayed. During the pandemic, the crisis has only deepened. Pre-trial limits for unconvicted prisoners are regularly exceeded, with judges accepting that the pandemic constitutes an ‘exceptional circumstance’ justifying their continued detention, while the backlog for Crown Court trials is growing at an unprecedented rate, rising from 41,045 trials in March 2020 to 70,000 cases by the end June 2021.

Alongside this, the brutal reductions in legal aid fees mean that for many lawyers, criminal work is no longer a viable career path. Faced with earnings that are below the minimum wage, criminal barristers are defecting to other parts of the Bar, with the Criminal Bar Association reporting that 22% of the junior Bar have left since 2016, and with the number of QCs specialising in crime falling by almost half.

Superficially, the government would seem to be trying to reckon with the problem. In his budget, the Chancellor, Rishi Sunak, handed an extra £477m to the justice system, while earlier this year, Robert Buckland, then Lord Chancellor, lifted the funding cap on sitting days in the Crown Court, ensuring that judges are able to sit according their availability, rather than according to whether the government has handed over enough money for the court to open. Unfortunately, this is like trying to staunch a gunshot wound with a tissue, as the government is well aware. Speaking to the House of Commons, James Cartlidge, the justice minister, told MPs that the increased funding will only reduce the backlog to 53,000 – by 7000 cases – by 2025, with Raab later telling Sky News that he could not be sure when the backlog would even be reduced to pre-pandemic levels. Responding to Cartlidge in the Commons chamber, David Lammy, the shadow justice secretary, said that the system was ‘in end times’, and that the government needed to act, or ‘let the system collapse’.

Cartlidge’s answer to Lammy was indicative of the greater issues that plague this government. Rather than acknowledging the obvious limitations in the government’s proposals, or even conceding that while Lammy was right that progress was slow, this was all that was available in the present financial climate, Cartlidge tried to redirect attention to immigration, claiming that Labour had voted to ‘keep clogging up our courts with immigration and asylum cases…’. No matter that Lammy’s criticism was about the criminal courts, rather than the tribunals and the High Court, where immigration cases are hear. It was more important to the minister to try and stoke populist fears than to engage with the real question.

It is this attitude that explains the government’s proposals for two new pieces of legislation, Harper’s law, which would extend mandatory life sentences to anyone who commits manslaughter of an on-duty emergency worker, and second, dog theft, which would make it an offence to take ‘a dog without lawful authority. As Joshua Rozenberg and Matthew Scott have respectively written, both of these new laws achieve very little. The former gives judges the power to impose a life sentence absent exceptional circumstances, which, as Rozenberg writes, means ‘life sentences won’t be mandatory for manslaughter after all’. Equally, Scott is sceptical of the need for a specific dog theft offence, which is ‘not a very common crime’, and particularly one that seeks to deter criminals by ‘creating a law which makes [sentences for dog theft] even shorter’.

While both these pieces of legislation are impressive in their pointlessness, what they do is create the impression that the government is acting ‘for the people’. It is much easier to spin a story about dog theft, which pulls on people’s heartstrings, than it is to spin a story about increasing the funding available to legal aid for defendants, which just makes people think their taxes are going to criminals, forgetting that it could be them who end up in the dock.

Raab doesn’t care that he didn’t give an address to barristers last weekend because he knows that his constituents don’t care. Ensuring that he is still in Parliament after the next general election is more important to him than fulfilling his oath as Lord Chancellor to ‘respect the rule of law’. Similarly, the government doesn’t care that its legislation is pointless because it knows that most voters don’t know this. Ensuring that it looks like it is doing something to benefit the people is more important than actually running the criminal justice system effectively.

This lackadaisical, populist approach to governing has its limits, however, as Priti Patel is discovering with her continued failure to guide the Home Office through the migrant crisis. Eventually, the public is recognises incompetence and inadequacy for what it is, even if the scales need to be dragged from their eyes. The challenge which those advocating change in the criminal justice system face is convincing the public that, as the Lord Chief Justice wrote earlier this month, ‘they do not exist simply to provide a service to those who use them’, but that they are ‘one of the building blocks on which civil society and economic activity rests’.

Raab promises to end ‘nonsense’ of Human Rights Act.
Raab promises to ‘correct’ European human rights rulings
Raab pledges to take back control of the parole board
Raab wants prisoners to have internet access in cells to…
Raab's assault on liberty