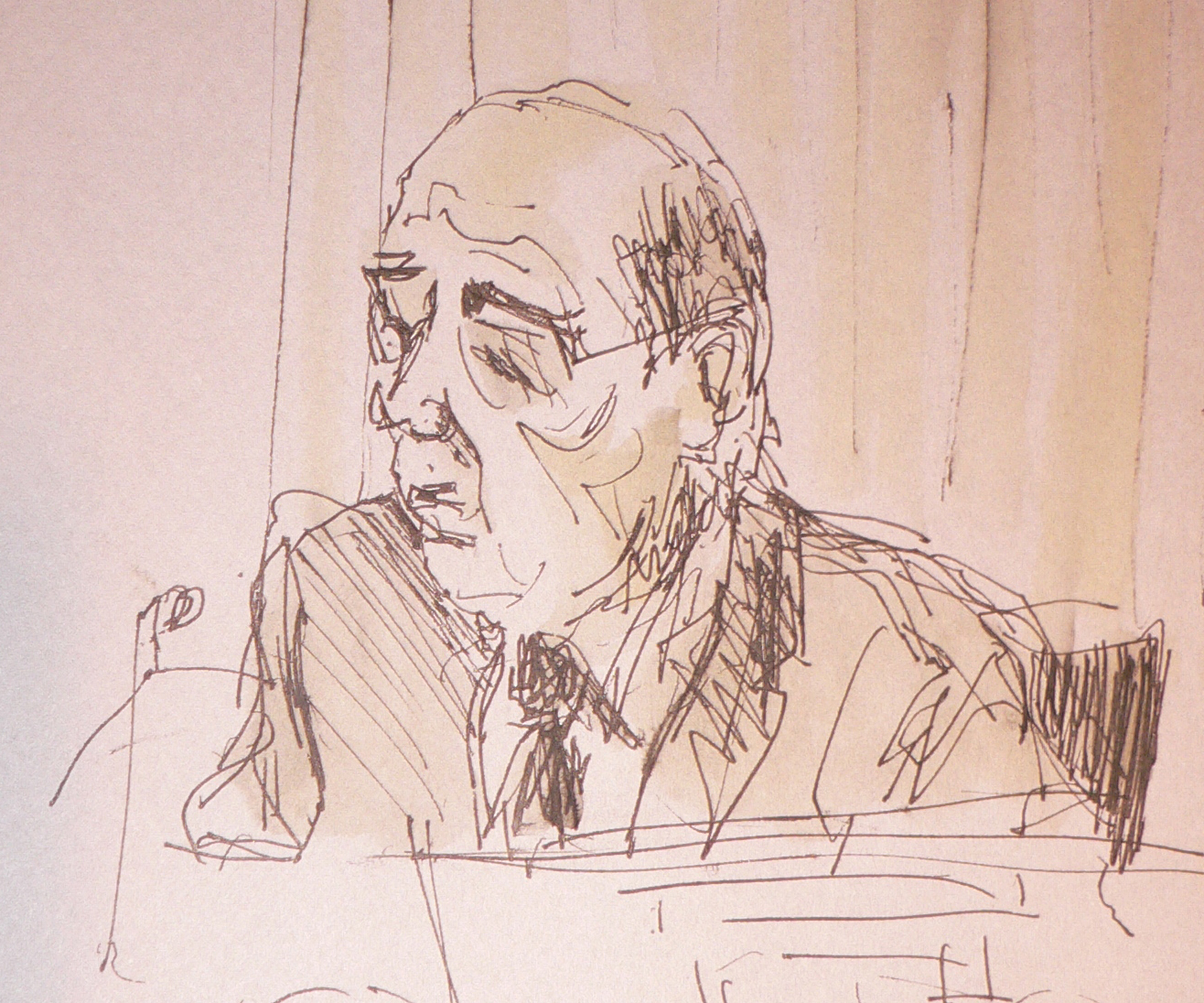 The prospect confronting a courtroom artist is not that aesthetically pleasing: plastic water jugs, computers, suits, a far-away view of the subject – and you’re not even allowed to draw in court, thanks to section 41 of the Criminal Justice Act 1925, writes Isobel Williams.

Official pictures are produced by a handful of artists with a highly developed memory: they take notes in court, hop it and draw like mad to a tight deadline.

The Queen’s speech included a plan to allow limited televising of courtrooms as part of the move towards open justice. Television cameras would presumably bring permission to sketch at last – so what would it be like?

In the spirit of ‘open justice’ – and wishful thinking –  the JusticeGap asked the Ministry of Justice to allow me to sketch in court. The Ministry of Justice said: ‘Unfortunately there is no discretion for judges to grant permission to allow sketching within a courtroom. Like filming or taking photos in court the legislation provides a blanket prohibition on sketching within a court.’

My blog is subtitled ‘Drawing from an uncomfortable position’: the Leveson Inquiry fits the bill. And as it’s an inquiry, not a courtroom, the Criminal Justice Act doesn’t apply. 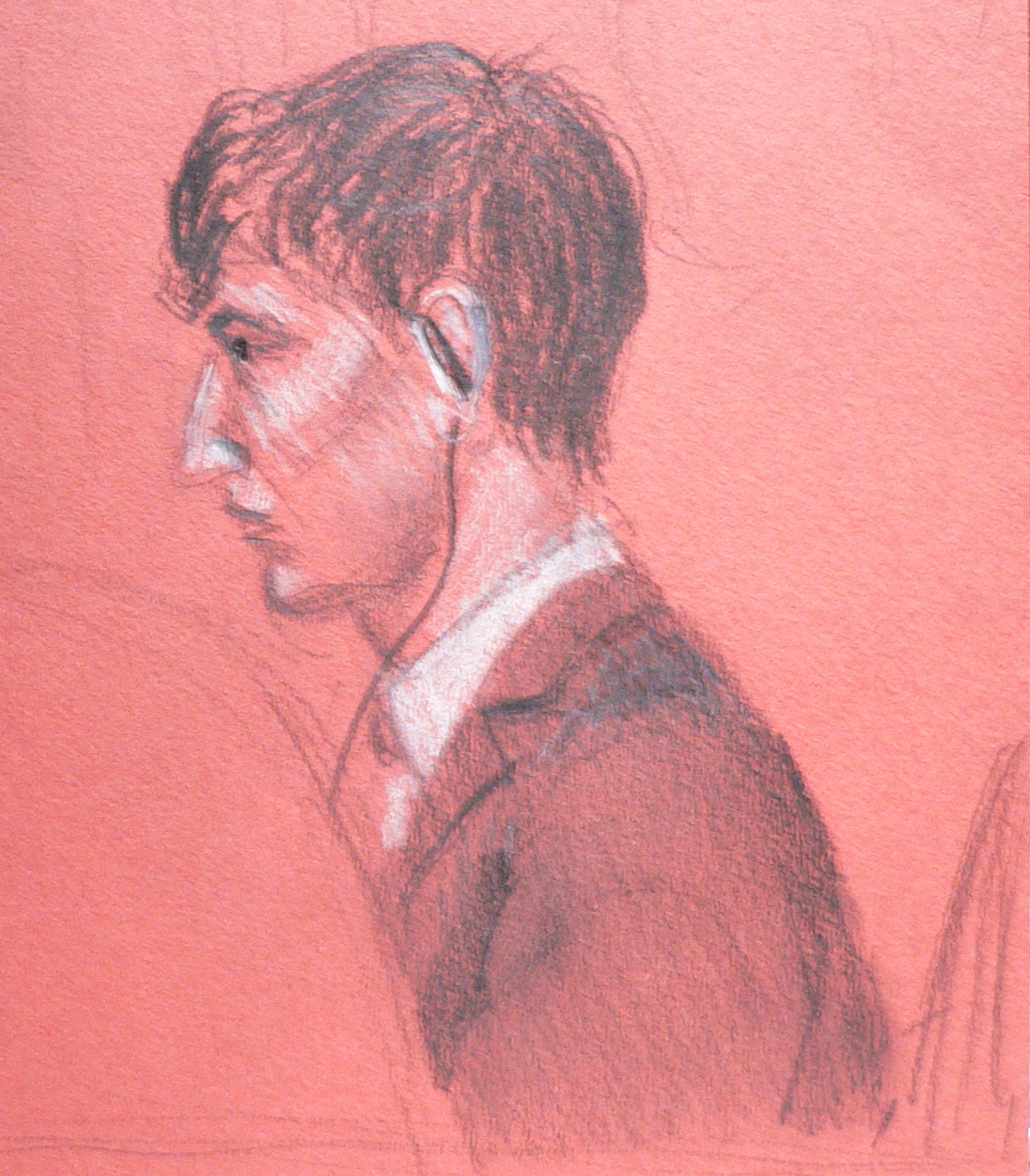 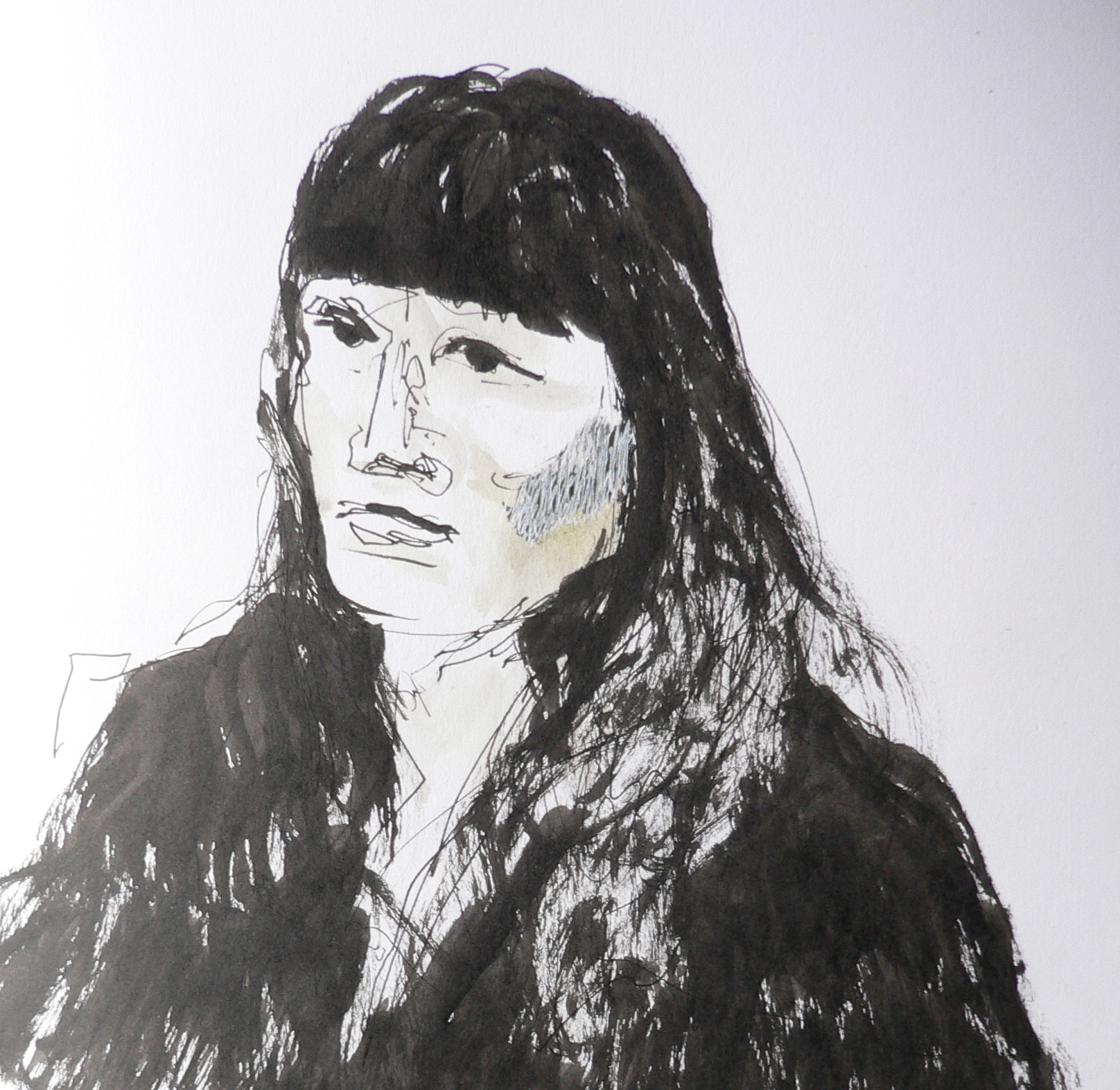 When grandees such as Tony Blair were on, people queued from 4am to get into the public gallery. Today there’s no queue to speak of.

‘What was the best day at the inquiry?’ I ask Jeremy, a cameraman.
‘Max Mosley.’
There’s chitchat among the tricoteuses in the public gallery:
‘Rebekah Brooks…’
‘If she’s charged…’
‘Can’t stand that woman.’
‘She came in and looked several people straight in the eye.’
‘Jay [Robert Jay QC, lead barrister to the Inquiry] has reputedly earned half a million pounds for this. He’s worth it. It’s public money. My money.’
‘I wanted to say to Jay, why don’t you really attack Blair?’
‘Because Blair’s got a legal background, that’s why.’
‘I need a small child to gnaw. I’m starving.’

My optician says I’m top gun standard. And today I need it because I’m a long way from my targets across Courtroom 73. I can’t see what I’m drawing.

I’m messing around with a portable, court-friendly but inadequate drawing kit and reduced to sharpening pencils into my pencil case. 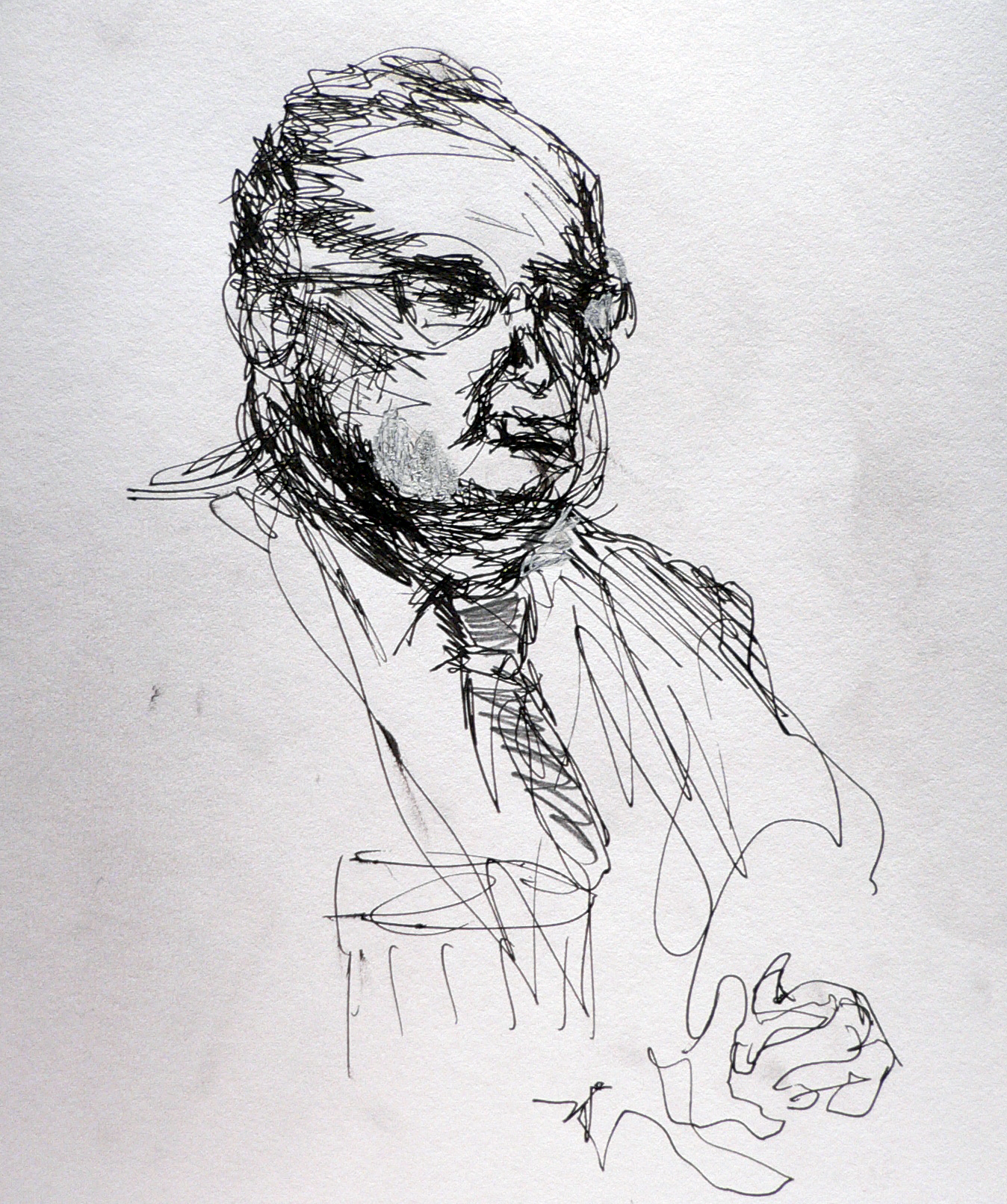 Peter Riddell, formerly of the FT and The Times

‘Will the court rise,’ says the clerk, and a mouse’s nest of pencil shavings falls on the floor. Sorry.

Now for a bit of glamour. The harsh fluorescent light bounces off Jon Snow’s cheekbones. They are as defined as scimitars. No wonder he’s on the telly. 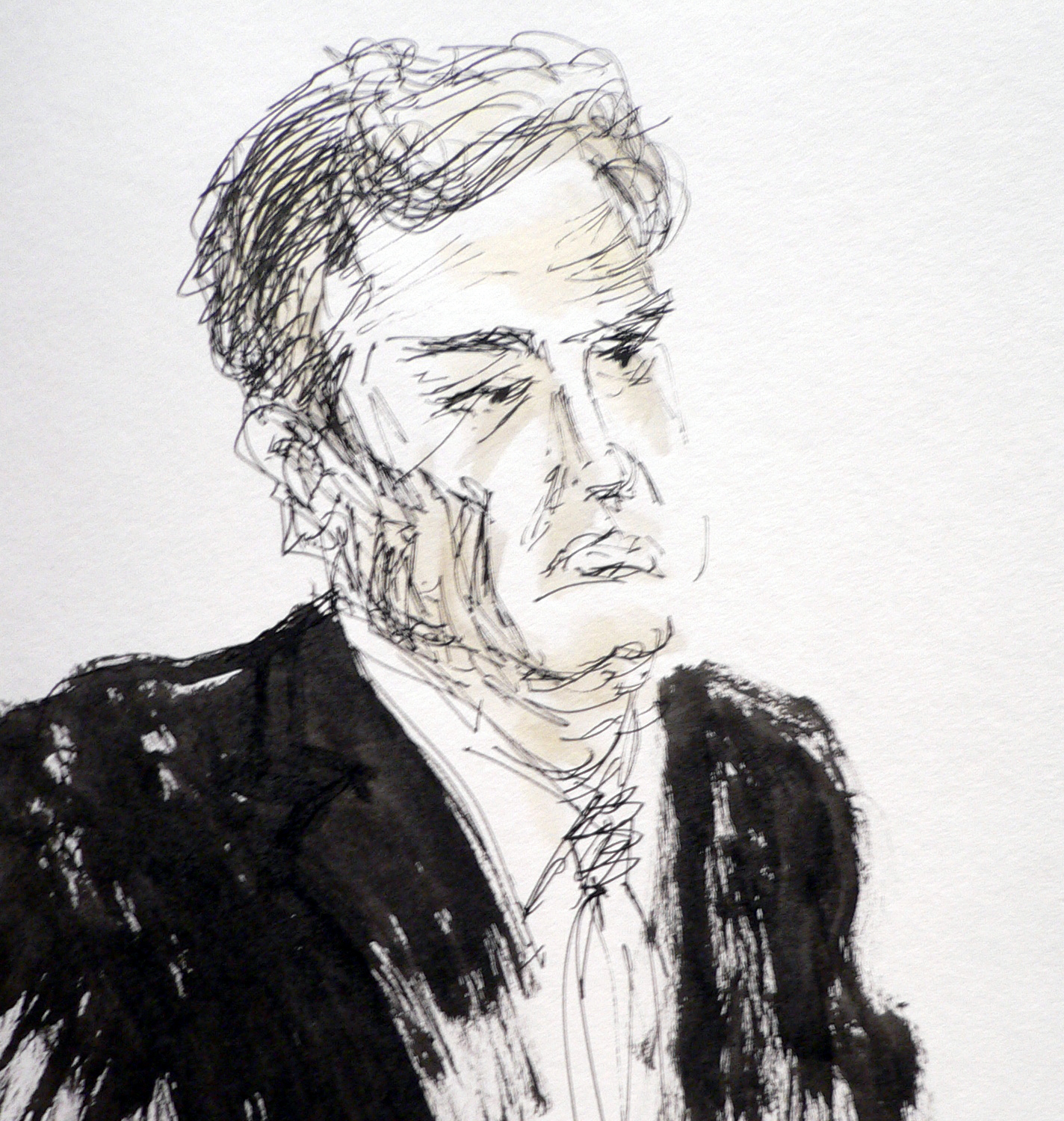 ‘Jesting,’ growl two pedants in the public seats, one of them me.

We can hear a helicopter and seagulls.