‘Jihadi John’: the making of a moral panic

‘Jihadi John’: the making of a moral panic 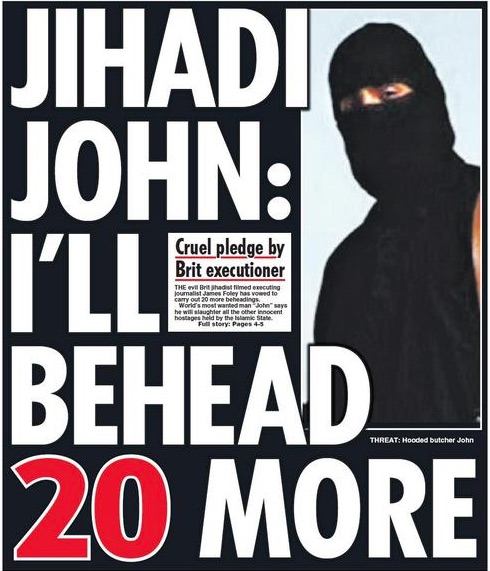 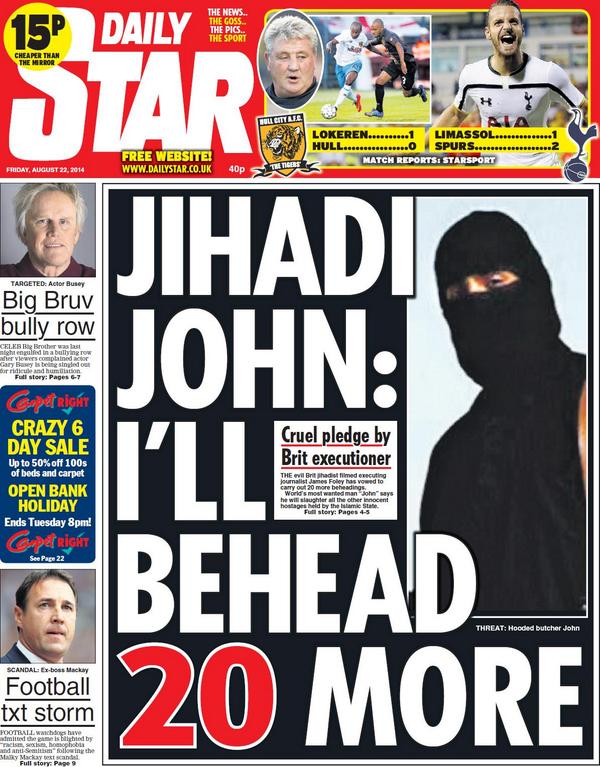 Stanley Cohen, in his seminal study Folk Devils and Moral Panics (1964), says that societies ‘appear to be subject, every now and then, to periods of moral panic’.

‘A condition, episode, person or group of persons emerge to become defined as a threat to societal values and interests; its nature is presented in a stylised and stereotypical fashion by the mass media; the moral barricades are manned by editors, bishops, politicians and other right thinking people; socially accredited experts pronounce their diagnoses and solutions; ways of coping are evolved.’
Stanley Cohen

Although Cohen was commenting on a different era that was arguably more media insular and less media pervasive, nevertheless his observations still retain contemporary resonance. John Macionis and Ken Plummer (in Sociology: a global introduction) pointed out in 2002 that, since Cohen’s study in 1964, many such ‘folk devils’ and moral panics have been identified.

In the contemporary climate, the ‘moral panic’ has been identified as Islamic fundamentalists – radicalised Muslim youth and the ‘home-grown’ terrorist. Building on Cohen’s assertion – and in the British context – one such moral panic is the fear of the increased threat of violence on British streets emanating from the identified modern ‘folk devils’ – the returning British born jihadist.

Jihadi John
This has been exacerbated by the wave of Islamic State of Iraq and Syria (ISIS) executions of Western hostages by beheading over the last year, sending shockwaves throughout the world. The fact that those Western hostages executed were innocent people, going about their work in either delivering aid or simply reporting to the world the unfolding tragedy in that region, compounded the sense of revulsion and moral outrage as well as raising the uncomfortable question as to how to confront this new and seemingly invincible ‘force of evil’.

The fact that the US and UK intelligence community identified the chief executioner as a British subject – known in the media as ‘Jihadi John’ – sent further shock waves throughout the West especially in the UK. The response from the politicians in Westminster and the British media was as predictable – as was the shock and horror that a British born citizen could commit such atrocities.

The subsequent blanket broadcast media coverage that followed each of the executions was equalled by the British press – as the headlines above indicate. Collectively, it could be argued at that time, the British media succeeded in stimulating a new moral panic to which the Westminster coalition government had to respond.

The new moral panic lay not so much in the rise of ISIS, but rather the realisation that young British Muslims had joined their ranks, and that they were prepared to share with the social media savvy and other politically disillusioned young Muslim people in the UK the results of their ‘work’.

Part of this moral panic derived from the fact that the increased, and some might say draconian, measures put in place in the aftermath of the London bombings and Glasgow Airport attack in 2007, appeared to be ineffectual. Measures such as increased surveillance of young Muslims, increased stop and search in particular communities and the implementation of anti and de-radicalisation projects including the PREVENT strategy, whilst designed to keep the UK safe from terrorism appeared to only add to the radicalisation process for a minority of young ‘hard to reach’, disillusioned and alienated young Muslims.

The ability to access ISIS propaganda, via the social media, the relative ease by which many could travel to Syria to ‘enlist’ in their cause also served to heighten the sense of moral panic in the UK.

The enemy within
It was also recognised, especially in the wake of the Charlie Hebdo attacks in Paris and the stand-off in Belgium days later in January 2015, that this was now a Europe wide threat.

Indeed, according to Shiraz Maher:

‘That the flow of foreign fighters has worried governments across Europe, from where more than 3,000 people are thought to have travelled to support jihadists in Syria and Iraq. The consequences of this mobilisation have been far reaching. The Syrian crisis revived the fortunes of the global jihad.’
New Statesman, October 31 2014

However, within the UK context it was the identification of ‘Jihadi John’ (later identified as Mohammed Emwazi from London) as a British citizen that fuelled the moral panic. The fear of returning jihadist bringing violence to the streets of Britain, and especially in the aftermath of the brutal killing of soldier Lee Rigby in broad daylight in Woolwich, London, served to heighten the insecurity in relatively secure Britain. The notion of the ‘home grown’ jihadist, or the ‘enemy from within’, heightened the call for increased security measures and government intervention.

‘It is abhorrent that people who declare their allegiance elsewhere can return to the United Kingdom and pose a threat to our national security. We are clear in the principle that what we need is a targeted, discretionary power to allow us to exclude British nationals from the UK.’
Guardian, September 2, 2014

However, and again, according to the Guardian, this ‘clear statement of intent was not backed by any proposals to match the rhetoric’.

While the moral panic, following the initial shock and outrage of the atrocities carried out by ‘Jihadi John’, was now giving way to the new and uncomfortable reality of the growing number of young radicalised Britons, both male and female, travelling to Syria to join ISIS, together with the real prospect of trained and experienced jihadists bringing the fight to Britain’s streets and communities sent alarm bells ringing both within government, the security and intelligence services as well as society in general.

The increasing political disagreement within the coalition government in terms of the best way to counter such threats mirrored the increasing anxiety, uncertainty and division within wider society. In attempting to bring a sense of leadership and direction to this new and uncomfortable reality, divisions within the government and Cameron’s approach merely served to bring about a different and further sense of moral panic, based on a perceived crisis of leadership and effective action.

Paddy Ashdown of the Liberal Democrats warned David Cameron and the government against the implementation of ill thought out measures. Under the headline ‘Ashdown slams ‘knee-jerk’ Tory response to jihadi terror threat’, he accused the Prime Minister of ‘stoking fear in the minds of the British people’ (Observer, August 31, 2014).

The sense of uncertainty of how to deal with the new reality of returning and trained jihadists to the UK was also reflected in the headlines of the Guardian:  ‘Cameron shelves move to ban British jihadis returning to UK’ (September 2 2014) and ‘Jihadis face ban from Britain: counter laws will allow police to seize suspected extremists passports’ (November 14 2014) .

With the security threat in the UK being raised to the level of ‘severe’, the debate regarding the measures needed to combat such threats and indeed, allay public fears was again, inadvertently, having the opposite effect. With continuing disagreement came continuing public disquiet at the uncertainty at the highest levels of government.

Apart from the uncertainty regarding the measures suggested, such as the seizing of passports by the police, names being put on ‘no fly lists’, as well as the power to prevent suspected terrorists returning from abroad, the legal uncertainty was also highlighted with the latter measure likely to be challenged by human rights lawyers.

The Guardian pointed out that Cameron and his cabinet colleagues were wary of testing such issues in the future in the high court and, as such, any legislation would be drafted ‘to overturn any future ruling that strikes down the operation of these powers’ (September 2 2014).

In relation to the seizing of passports, the former solicitor general Edward Garnier pointed out ‘this could be illegal as Britain is a signatory to at least two UN conventions preventing states making their citizens stateless’.

While new legislation has been implemented, there remains a societal perception and sense of uncertainty generated by a seemingly uncertain government in how to deal with the new uncomfortable reality. This uncertainty has perhaps brought with it a new moral panic, one that has replaced that generated by the gruesome executions of Britons by a Briton, ‘Jihadi John’. This poses the question: is the existence of a moral panic simply a symptom of society in crisis? And, as a society, to paraphrase Cohen, have our politicians and socially accredited experts found or evolved ways of coping, with such a threat?

Alan is a senior lecturer in criminology at Winchester University

Our print magazine is Proof. Contributors include Michael Mansfield QC, Bob Woffinden, David Rose, Eric Allison and Ian Cobain.
Buy Proof Magazine
The latest issue (Why legal aid matters) includes Helena Kennedy QC and Martha Spurrier in conversation, David Conn on the legacy of Hillsborough - plus how to build your own law centre.
Alan is a senior lecturer in criminology at Winchester University

Episode 7: 'Truth and lies about modern slavery'
Leon Brittan's widow accuses Met of losing 'moral…
Justice Gap over the summer
Depp loses libel case: 'No survivor should have her…
70% drop in number of children arrested since 2010