“It’s easier to believe that they are “migrants”.  We can’t acknowledge we have let 30 desperate refugees drown’

“It’s easier to believe that they are “migrants”.  We can’t acknowledge we have let 30 desperate refugees drown’ 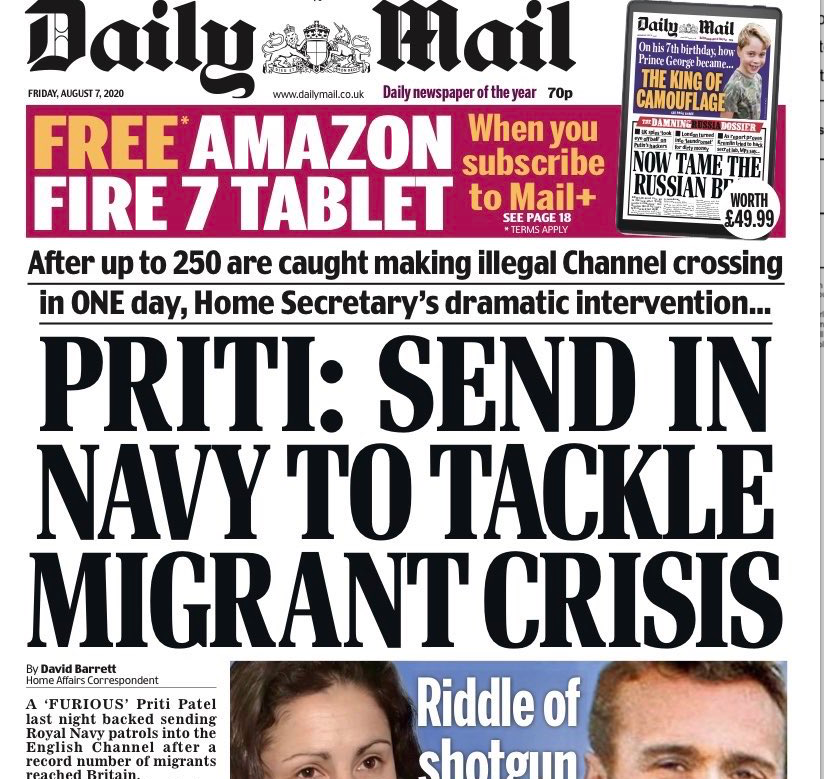 We know desperately little about those who drowned in the Channel this week. We know they set off from Calais in search of safe harbour in the UK. We know their ethnicity, if not their nationalities. We know they will have been terrified as their boat was submerged by the waves, and that their last moments will have been the stuff of nightmares.

For some, we know their names. Beyond that, we are reduced to guesswork. We can infer that they were desperate, that they thought the UK was the best place for a better life, and that they had hope for the future.  We can infer their social class, their ages, their education. But much is left unknown.

Despite this pervasive uncertainty, one narrative that has emerged is that these people were incontrovertibly migrants. It was splashed across the front pages of The Times, The Daily Telegraph, and The Sun. On some literal, lexical level, this is perhaps true. Migration comes from the Latin migrare, ‘to move from one place to another’, and the UN defines it as ‘someone who changes his or her country of residence’.  But that is not what most people using it in the aftermath of this tragedy mean by it.  Migrants, to them, are people who choose to move.  They are people not forced from their homes, fleeing persecution at the hands of the state or the ravages of war, but people who have come here because they hope for jobs and a better life.  They have chosen to come here.

It is perhaps easier for us, as a country, to believe that these people are migrants.  Our shared humanity, and our vestigial awareness of what some people endure in other, less privileged, countries than ours, means that on some level, we want these people to be migrants.  Pathetically, we cannot acknowledge that we, as a nation, have potentially let 30 desperate refugees cruelly drown in the English Channel, having escaped the horrors of their mother countries, and with their final destination almost in sight.

But that is what we have done.  Already, one of the dead has been identified as an Afghani who had assisted the British forces during the western occupation, and who was abandoned in the retreat from Kabul.  Rather than face death at the hands of the Taliban, he travelled thousands of miles in the hope that if he could only wash up on a British beach and tell us his story, we would offer him sanctuary. Instead, we watched him drown. It is certain that there will be others. Perhaps not all of them will be as obviously deserving as this Afghani. Not all of them will have faced persecution because of assistance they offered to us when we needed it, but that makes them no less entitled to safe haven. Asylum is not a quid pro quo. It is an act of humanity, a recognition that while we may speak different languages, may worship different gods or none, and may come from different cultures, we all deserve, at the end of it all, to be safe.

If we pretend that these people were economic migrants, we absolve ourselves from this sin.  We can say that they chose to come because of the benefits, and because of the opportunities to work here. They knew the risks, they gambled, and they lost, Inexplicably, those who offer such arguments present it as a self-evident truth, as though seeking a better life is so outrageous as to make death a reasonable punishment, as though violating a country’s border is some heinous crime, rather than the crossing of an invisible line.  There is no attempt at empathy, no attempt to consider how awful a person’s life must be for them to abandon everything and everyone they know, to travel for thousands of miles across unfamiliar terrain, and to risk their lives, not in pursuit of a certainty, but in pursuit of a fleeting, glimmering hope that, somehow, life in Britain will be better.

Not only is this argument devoid of any empathy for our fellow men, but devoid of any coherence whatsoever.  Underlying it is the presumption that because the people were in France, and France is safe, they should have stayed there.  Yet France may not have been the first safe country they travelled to.  If France, and every other preceding country followed our logic, every refugee would have to stop at the first safe country they arrived in. While this may seem to make intuitive sense, it falls apart unless you are willing to equate the strength of a  country’s moral obligation to help refugees with its proximity to their persecutors.  This is fatuous.  Given that the majority of the world’s refugees are concentrated in particular unstable and poor regions, not only is empty of any logic, but of any pragmatism, leaving the world’s poorest, least well-equipped countries responsible for refugees, not the distant, wealthy ones.

It is revealing that this presumption is also the government’s primary line of attack.  Speaking in the aftermath of the tragedy today, Priti Patel inanely repeated her belief that asylum seekers should seek asylum in the ‘first safe country they arrive in’.  In his belligerent, open letter to the French President, Emmanuel Macron, Johnson proposed British putting police forces on French soil, helping patrol the Channel crossings.  It is little surprise that the French have cancelled Patel’s invitation today. We wouldn’t accept the French police violating our sovereignty by patrolling Dover’s beaches, and it is insulting to expect them to act any differently.

And while France deserves its share of the blame, the solution to the refugee crisis lies in accepting they are refugees, and accepting our international responsibilities.  The government must acknowledge that we need to provide ways for people to claim asylum here, such as  through erecting processing centres in Calais.  Germany and France, to say nothing of less wealthy countries like Turkey, already accept tens of thousands more asylum seekers than Britain does, and while they may face their own challenges in managing this, they do not bleat uselessly at their neighbours to protect them from the apparent scourge of refugees.  Britain may be a literal island, separated from the European mainland, but it is not a metaphorical one. We are a part of the international community, like it or not. It’s time we accepted that.

In defence of activist lawyers
Most people crossing Channel by small boats likely to be…
Priti Patel to give immunity to Border Force officials…
Twenty nine asylum seekers have lost their lives in Home…
Refugees, climate change and access to justice