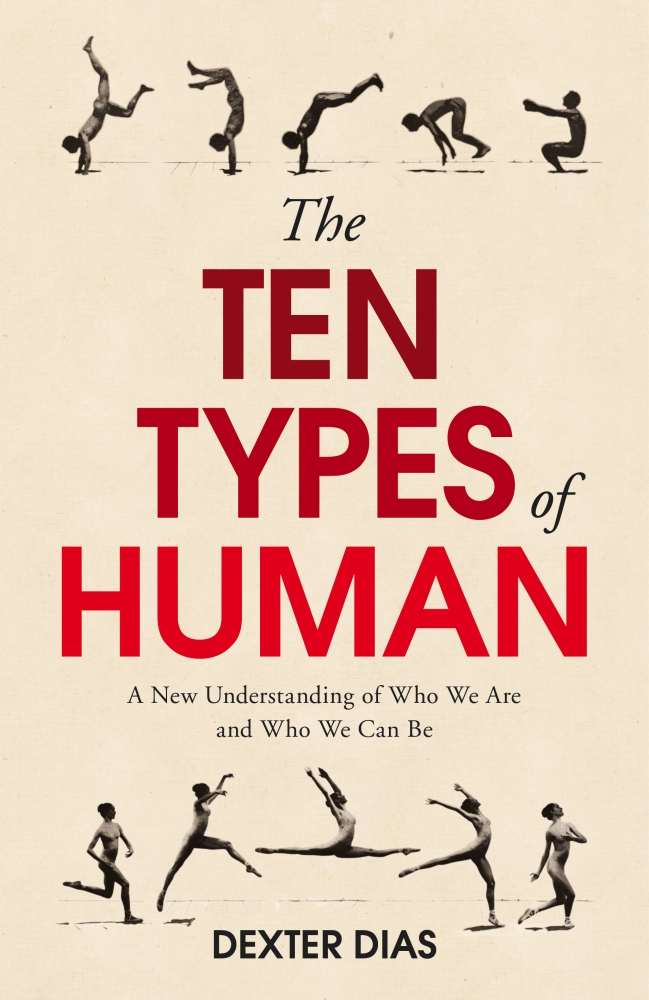 The author of a new book, The Ten Types of Human, met with Will Bordell to talk justice, empathy and human rights

Dexter Dias is never more than a few sentences away from a thought experiment. This is one of them: You’re watching a game between two players, Maria and Denise. They can’t see you, but you can see them. You enjoy the competition as they try to outwit each other, some rounds going Maria’s way, others won by Denise.

Then, something changes. Out of Denise’s sight, Maria hits a button. The game becomes skewed, and Maria starts to win every round. You watch for a while, as the cheat prospers, and then you’re told you can leave. On the way out, you’re given £10 for your time. You’re then asked if you want to give £2 back to even the game up.

Chances are, so the experiments tell us, you’ll hand over the money. ‘That tells us something very important,’ argues Dias. ‘It tells us that we don’t actually have to create a sense of justice. It’s there. The question is how we actually find ways to make people aware that they can do something about it together.’

Many questions motivated Dias to write a book the length of a Russian novel, but this is perhaps the most important. Now a part-time judge and a QC at Garden Court Chambers, Dias began working in the Thatcher years, drawn to – in his own words – ‘anti-Apartheid work, CND, Greenham Common, defending hippies who wanted to dance naked around Stonehenge, that kind of stuff.’

But after representing the mother of Gareth Myatt, a 15-year-old boy killed in 2004 when three guards at Rainsbrook secure training centre physically restrained him, Dias wanted to understand more about the hidden parts of the human mind that made these guards behave as they did. It’s a feeling familiar to many lawyers – as he writes in the book’s prologue, you might finish the case but ‘the case isn’t always finished with you’.

What followed is, as its title suggests, almost inconceivably ambitious. ‘Really,’ he says of the book, ‘it’s borrowing from moral cognition, evolutionary psychology, social psychology, and putting that together with human rights. It’s all connected.’ Much of the leg-work of Dias’s argument comes from his attempt to chart the patterns we often fall into when, faced with particular situations, our brains trigger networks that have evolved over millennia. Dias strikes the drum for social justice at a time when many of its principles appear to be in danger. Often in the space of a single page, his book braids together the findings of modern-day neuroscience with the true stories of people from Cameroon to Haiti. Time and again, we hear the voices of those who demonstrate, against all the odds, that empathy is possible – and possibly transformative. If there’s a lesson about human rights that Dexter Dias hopes to teach, this is it.

Profoundly social
Along the way, we encounter type after type: the Kinsman, the Ostraciser, the Aggressor, the Nurturer. This is how we come to hear of Dawn Faizey Webster, who braves locked-in syndrome by learning art history and cracking jokes (the Tamer of Terror). It’s how we meet Michael and Anthony, two boys sold into slavery to catch fish on Lake Volta, who find resolution in each other’s friendship (the Perceiver of Pain). It’s how we find Vasily, who risked his life trying to save a stranger from sex trafficking in the deep snowdrifts of the Ural Mountains (the Rescuer).

This elaborate taxonomy can distract from what the book is really about: empathy. ‘Thatcher said there’s no such thing as society’, Dias tells me. ‘And she’s absolutely wrong. The history of our species shows us that we have evolved, certainly since that time in the savannahs of East Africa, as a profoundly social species.’

The trouble, for Dias, is that this strand of evolution is ‘in constant tension with egoistical and self-centred drives.’ He elaborates, as so often, with an example: ‘One way of looking at the difference between, say, Trump and Brexit, and Corbyn and Bernie Sanders, is where you strike that balance between prioritising self and prioritising society. That, I think, is the battle.’

When sitting as a judge, Dias tries to put his ideals into practice. In sexual abuse trials, he has learned how empathy can transform a case. Since the revelations about Jimmy Savile in 2012, victims of historic abuse have been more willing to come forward. ‘In one of the court centres I sit in,’ says Dias, ‘50% of all the contested trials coming up are sex cases. It’s a sea-change. It’s one of the most important developments in criminal justice in the last 20 years.’

‘But if we haven’t thought about how judges and advocates deal with vulnerable people,’ he warns, ‘we run the great risk of re-traumatising people, and that can cause immense damage.’ He explains what he means through a case in which a complainant wanted to give evidence against a close relative. ‘All she wanted was to hold a little fluffy hippo when she gave evidence. That was it. When I saw that application, I realised that that little hippo was in fact a lifeline – so I permitted it. She very likely would not have given evidence if I had not allowed her to do that.’

Are courts the best settings in which to help people work through their trauma? ‘Justice is collective therapy,’ Dias jumps in. Almost instantly, he segues into another example: ‘In a case I judged recently, a young person who was abused 20 years ago came forward and gave evidence, and the reason was because he hadn’t lived a day without it. One of the things he wanted was public acknowledgement of what had happened to him. That’s incredibly important.’

‘Certainly in public inquiries, too, that public acknowledgement is vital.’ The inquiry into the Grenfell Tower disaster will be the latest in a long line of public inquiries – into the Iraq war, phone hacking, and violence in Northern Ireland – since the turn of the millennium, and the problems of empathy and truth are ones it’s already facing.

Institutional pressure
rison is one place where Dias has seen our sense of empathy become dangerously dulled. During the inquest into Gareth Myatt’s death, his mother Pam asked a question that Dias has tried to answer ever since: why? ‘The short answer to what happened’, he argues, ‘is that there was a profound lack of empathy.’

‘On an individual level, you had officers who were restraining a child who was crying out in pain, saying he couldn’t breathe, asking for help, wanting them to stop – and they continued restraining him. But on an institutional level, there’s also a staggering lack of empathy because pain is authorised to be inflicted on children in a systematic way. It’s been criticised by the European Commission on Human Rights, by the United Nations, and yet the government still does it.’

A 2015 report on Rainsbrook revealed that similar abuses to those that killed Gareth Myatt were still prevalent. Dias’s book rests on the premise that people can change, but can institutions? He outlines the example of a well-intentioned officer who told him that he had gone into the profession thinking of himself as Luke Skywalker, only to end up feeling like Darth Vader.

‘The reason he felt like Darth Vader’, Dias analyses without pausing for breath, ‘was that someone who was very little different to you and me was applying force and pain to children on a routine basis. That’s the force of institutional pressure – and that’s more difficult to change.’

In many ways, this analysis is the most successful aspect of The Ten Types of Human. Dias paints abusers and enablers of human rights abuse as human beings with neural networks like anyone else, rather than as monsters we have nothing in common with. Of recent acts of terrorism, he says that ‘the default answer that these are acts of evil tells us virtually nothing.’

‘You look at child slave labour on Lake Volta, for example,’ he elaborates. Estimates suggest that around 10,000 children sold into slavery are now working on the lake’s many fishing boats. ‘You’ve got women on the coast of Ghana who have six or seven children. Because of global warming, the Gulf Stream, the currents – sometimes the fish don’t come.’

‘What do you do? You’ve got six or seven children and you know for a fact that some of them are going to suffer from malnutrition or they’re going to die. And you know that you can keep them alive over that period by selling one of them. These are loving parents who have the most terrible dilemma.’

Only when you understand that dilemma, Dias believes, can you begin to tilt the scales in favour of the parents and their children. Garden Court is helping to fund a project that will enable women to freeze fish, ending the cycle of feast or famine. Grassroots strategies like this, alongside pressure on governments to enforce the law, can push communities towards ‘what the UN calls collective abandonment’. ‘Then the social norm changes,’ he adds.

‘My daughter will not be cut’
However relentless his book may be in depicting the very worst things we do to one another, Dias remains an optimist. Time and again in conversation, he returns to the stories of anti-FGM activists and their successes around the world. ‘We changed the law on FGM within a year,’ he says proudly of his efforts in the UK.

‘In sub-Saharan Africa, young girls can’t believe that anyone 3,000 miles away is concerned about what happens to them. The fact that you care is enormously important.’ He often faces the charge that this is Western imperialism all over again, and emphatically rejects it. ‘Not when you have hundreds of thousands of girls having their genitalia cut unnecessarily. That’s everybody’s business.’

'A victim of British Injustice': Derek Bentley remembered
Government to change law on non-disclosure agreements
#Jamaica50: Deportation charter flights and access…
Pregnant women should have sentences deferred or…
Comment: If you can't beat them, lie...