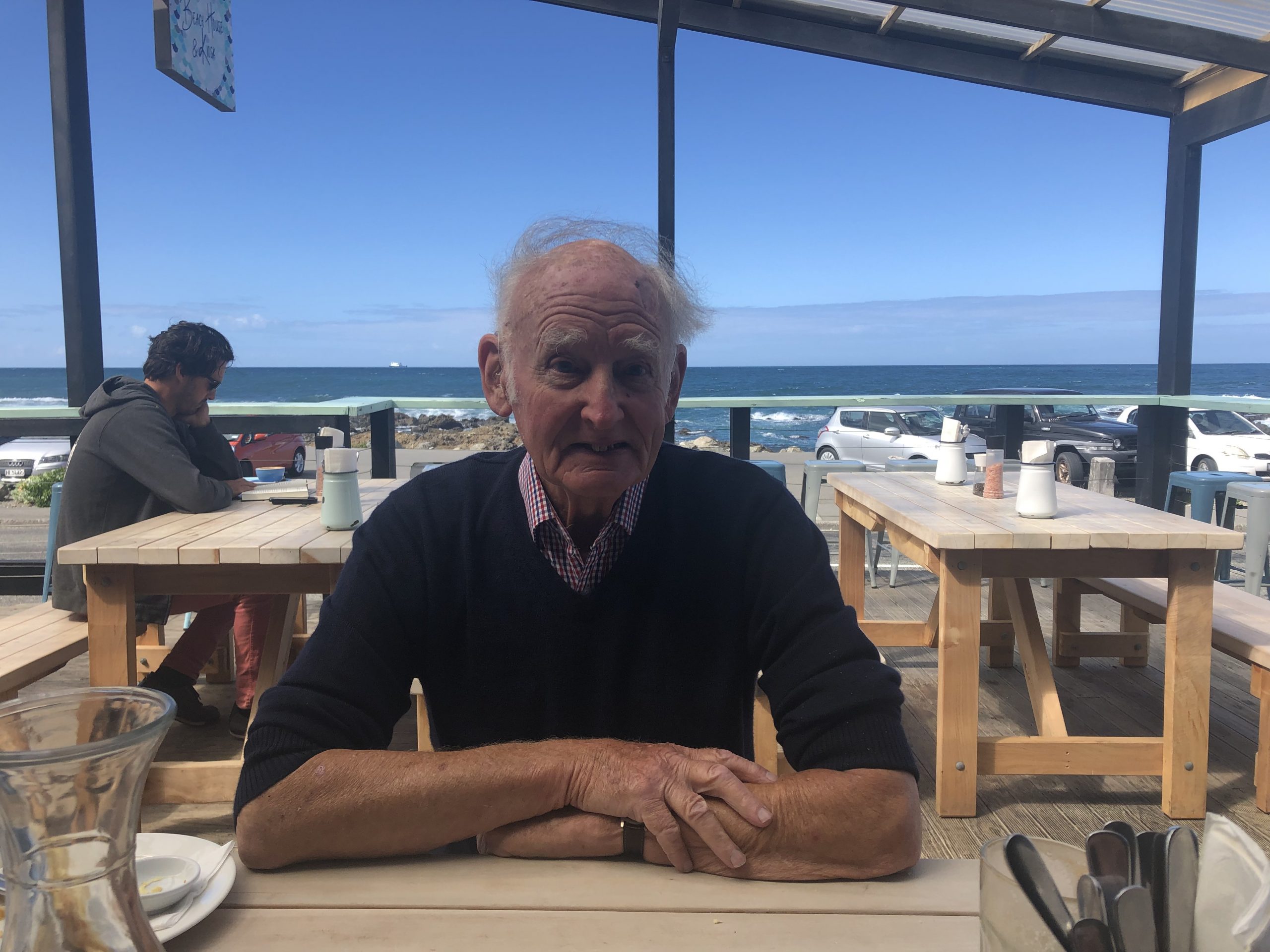 “I’ll stop when I can’t go any longer,” says 84 year old Robert Ludbrook when I meet him for a coffee in Wellington’s Island Bay. “The idea of retirement doesn’t appeal to me. I don’t want to play bowls; I don’t want to play golf,” he adds. Mary-Rachel McCabe meets the founder of YouthLaw Aotearoa, New Zealand’s only dedicated law centre for children and young people.

In his ninth decade, Ludbrook remains a dedicated champion of children’s rights and campaigner for social justice. He continues to annually update parts of New Zealand’s first family law text book, which he wrote in 1977, and he is still wearing cherry red Doc Marten shoes.

I want to know what led Ludbrook to social welfare law. After qualifying, he first worked as a solicitor in a general practice in Auckland, and then moved to a similar firm in London’s Palmer’s Green in 1961.

Mary-Rachel in currently on placement thanks to a scholarship from Inner Temple’s Pegasus Trust.

“When I worked in London, my boss said on the second day, ‘we forgot to tell you that once a fortnight you are the legal advisor for the local CAB,’” says Ludbrook. “I had to ask what a CAB was.”

The young lawyer had no experience of social welfare law in the UK. “I was absolutely hopeless to start with,” he says. “In those days there was a Rent Act and a lot of people had problems with that. I had never heard of the Rent Act, let alone looked at it. So I had no idea. I had to say to people ‘I’m really sorry, I don’t know how to help you, but if you come back next week, I’ll tell you.’.”

After looking up the Rent Act, Ludbrook “could manage”, he tells me. When he left the Palmer’s Green firm he moved to another firm in south London, where he volunteered to be the CAB legal advisor as he had “enjoyed it so much”.

Bringing CABs to New Zealand
“I thought the CAB was a really good idea,” says Ludbrook. “That was the start of my interest in community law.”

Ludbrook returned to Auckland in 1969, where a movement was starting to set up New Zealand’s first CAB. “I was the only person who knew anything about the British CAB movement,” he says. “I suggested that it provide free legal advice sessions like the one that I had worked at in London.”

New Zealand’s first CAB was opened in Ponsonby in 1970; then one of the city’s more deprived suburbs, now “one of the highlights for eating and drinking in Auckland”, says Ludbrook.

From the first CAB in Ponsonby, the idea rapidly spread throughout the country and a national association was established three years later, to give the CAB movement an integrated voice.

Ludbrook’s work setting up CABs in New Zealand eventually led him to a three-month live-in workshop, “The Asian Workshop on Legal Services for the Poor” in California, during which he spent three weeks at a Neighbourhood Law Office in Marysville, rural California.

He was inspired by the “very radical” lawyers to start a similar movement in New Zealand and, along with others, he set up the country’s first community law centre in 1978: the Grey Lynn Neighbourhood Law Office.

Now home to the majority of Auckland’s 20-something hipsters (and me, temporarily), the low social housing rent of Grey Lynn in the 1960s and 70s attracted largely Maori and Pacific Island communities.

“I loved that it was called a neighbourhood law office”, says Ludbrook. “We got the premises – above a butcher’s shop – for free from a lawyer who had a lot of property.” They made links with the Pacific Island and Maori communities and employed a Maori community worker.

From there, the New Zealand law centre movement spiraled and centres slowly opened up across the country.

Ludbrook later returned to London in the mid-1980s, where he practised housing law at Camden Law Centre. “People would have damp, smelly, dilapidated and mouldy houses and the council wouldn’t do anything about it,” says Ludbrook. “The funny thing was, Camden council funded the law centre and there we were, week after week, filing proceedings against them. I kept thinking one day they were going to pull the plug but they never did.”

From Camden, Ludbrook made his way to a job at the Children’s Legal Centre in Islington, which sparked his passion for children’s rights. He recalls going to “protests against Maggie Thatcher” in his spare time. “That was new to me,” he chuckles.

The birth of YouthLaw
After two years at the Children’s Legal Centre, Ludbrook “reluctantly” returned to New Zealand, as his mother was unwell.

In September 1986, he bumped into a colleague from the CAB in a park in Auckland, who told him he was managing the city’s Youth Resource Centre. He suggested Ludbrook set up a children’s law centre – based on Islington’s model – in the resource centre, offering him a room in the building and photocopying facilities for free.

The YouthLaw Project office opened for business in November 1986 in a tiny room at the Youth Resource Centre. It was initially run entirely by volunteers, including Ludbrook, who did part-time work as a duty solicitor to pay the bills.

“I remember well the first few weeks after the opening of the YouthLaw Office,” says Ludbrook. “I painted over the institutional-grey wall paint with a lighter, warmer colour and got hold of some bright curtains. The desk on which my son had done his homework was painted canary yellow and, with two chairs that my mother had cast off, formed the basic furniture of the office. Youth Resource Centre staff lent us a filing cabinet and law firms gave us discarded editions of basic law text books. My rather battered portable typewriter was an invaluable asset.”

It took until 1992 for the project to qualify for regular funding through the Legal Services Board, enabling paid staff to join the law centre.

Today, YouthLaw is part of New Zealand’s nationwide community law centre network, providing free specialist legal services to children and young people aged under 25 across the country. It has its own premises in Manukau, South Auckland, one of the city’s most deprived areas.

Life after YouthLaw
Ludbrook left YouthLaw in March 1992 to take up a position as founding Director of the National Children’s and Youth Law Centre in Sydney, where he campaigned against the detention of refugee children in “shocking” conditions. “There were other organisations pushing the issue but no one seemed to care – they seemed to be saying that they didn’t want these ships arriving and polluting their country, just like Trump is saying these days.”

He has dedicated his career to children’s rights ever since, in particular “using the law to change the law”. “That’s the most important thing you can do as a lawyer,” he says.

Reflecting on his career, Ludbrook says he “hates to be seen as some great person who’s changed the world”, but he is pleased that he made the move from private practice to community law.

“I would have hated to have ended up as a judge,” he says. “I don’t like judging; I like battling – battling for the small person.”

Campaigners call on PM to amend lockdown regime to allow…
Do people who get in trouble with the law deserve double…
Children 'systematically pleading guilty' to crimes that…
Children in prison were spending just 40 minutes out of…
Refugees, climate change and access to justice