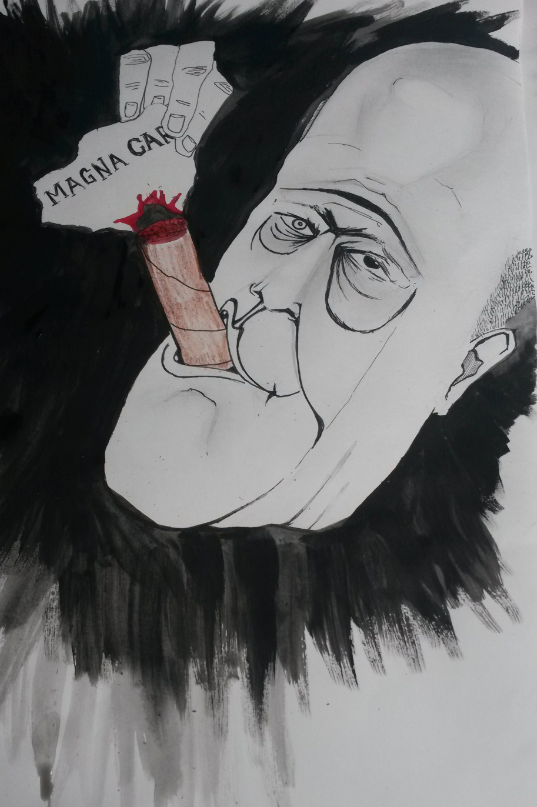 In an interview with Conservative Home last week, Justice Secretary Chris Grayling said he is the first impartial Lord Chancellor in 400 years. As his February pre-election PR stunt the Global Law Summit draws near, under the spurious guise of the 800th anniversary of Magna Carta (signed in June, not February), one wonders whether the hatchet man of justice is trying to fool the electorate or himself.

Hours after the interview was published, Ian Dunt exposed the Lord Chancellor’s disdain for the Rule of Law and judicial process, writing that despite the policy of the ban on books for prisoners being found unlawful in the courts, the Chancellor maintained that the ban had never existed. This is the same Lord Chancellor who was forced to admit that he misled the House of Commons on judicial review reforms.

The anniversary of Magna Carta should conjure up thoughts of equal access to justice and the rule of law. Such images jar with the growing number of individuals unable to uphold their rights and challenge unlawful government decisions as legal aid continues to erode. The Lord Chancellor might proclaim his impartiality, but it is clear by this point to almost all observers that he is co-opting British history for his own unjust ends in order to celebrate big business.

The Global Law Summit is an unashamed exercise in elitism. It would matter less if it was simply a law and business conference, but to market it as a conference to discuss the future of the rule of law on the (not quite) anniversary of Magna Carta is a shameless exercise in politicking. The Summit’s unabashed focus on business and networking, blatant pre-election timing and £1,500 ticket price have provoked growing criticism of the event.

Justice Alliance has responded with Not the Global Law Summit, a series of counter-events that seek to remind the Government 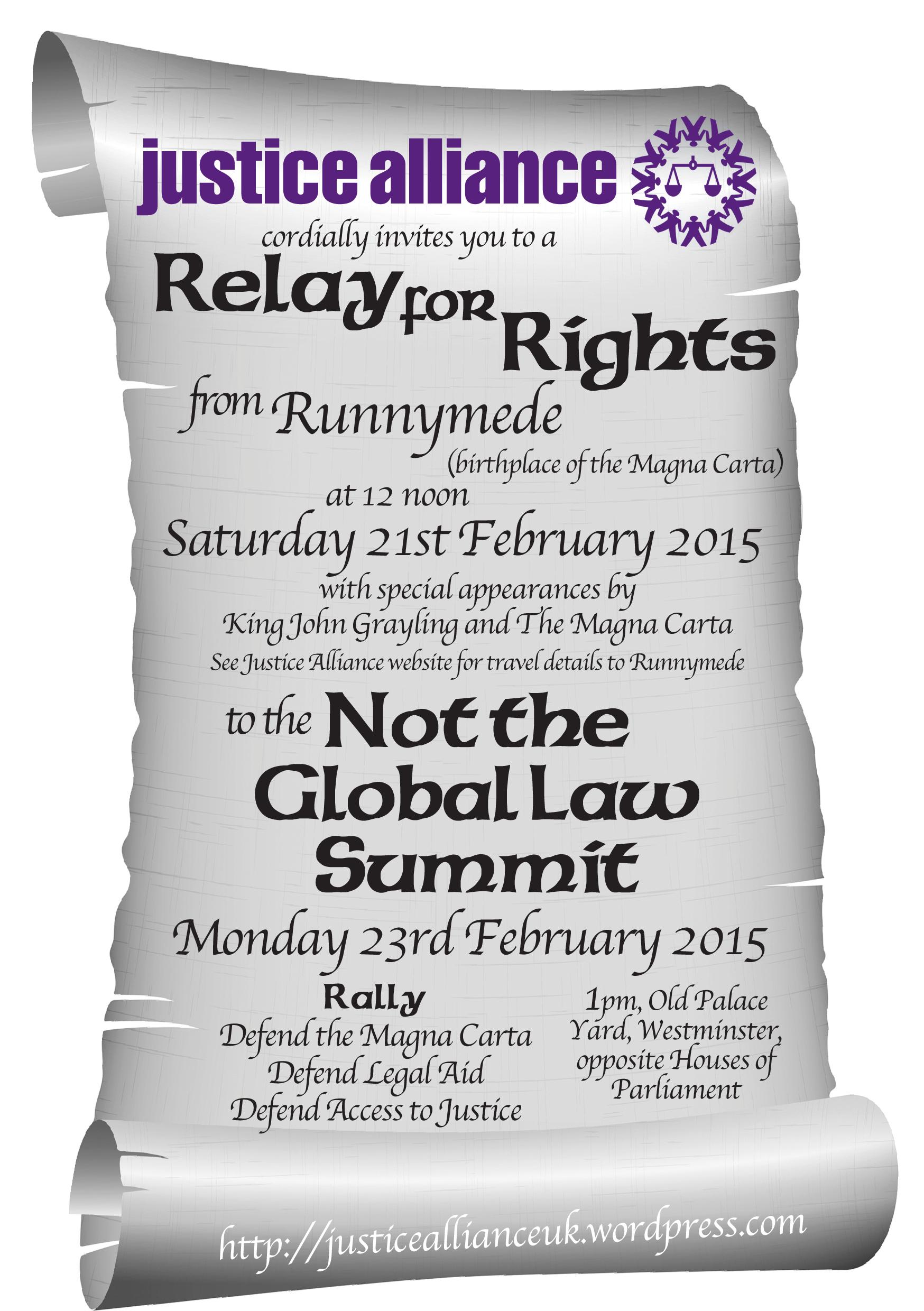 of its duty to provide access to justice to all of its citizens and not merely to the rich. #NotTheGlobalLawSummit starts on 21 February with a Relay for Rights from Runnymede to Westminster and a rally at 1pm Old Palace yard on 23 February. On the evening of 23 February Stand Up for Legal Aid: Justice Just Got Funny, a comedy night at Union Chapel, coincides with the first day of the Government’s Summit, offering some respite from the sickening hypocrisy of Grayling’s dour ‘Davos of law’ banquet.

Opposition to the Global Law Summit extends as far as the pages of the Telegraph, with a recent article by Peter Oborne criticising the ‘rank stench of moral hypocrisy’ that will hang over the event. Oborne laments the Government’s ‘systematic attack on the legal aid system which gives poor people access to the justice system’, and failures to act on issues such as British resident Shaker Aamer’s ongoing detention without charge in Guantanamo Bay and the pre-election promise to hold an inquiry into allegations of British involvement with torture.

During a House of Lords debate on Judicial Review reforms, respected peer and lawyer Lord Pannick QC spoke of the constitutional importance of Judicial Review and the hazards in circumscribing it, personally addressing Mr Grayling on the issue of the Lord Chancellor’s incompetence:

However inconvenient and embarrassing it is to Mr Grayling to have his decisions repeatedly ruled to be unlawful by our courts, however much he may resent the delays and costs of government illegality being exposed in court and however much he may prefer to focus on the identity of the claimant rather than the substance of their legal complaint, it remains the vital role of judicial review in this country to hold Ministers and civil servants to account in public, not for the merits of their decisions but for their compliance with the law of the land as stated by Parliament.

Grayling’s defeats at the hands of judicial review include his attempt to introduce a controversial ’12 month lawful residence test’ for civil legal aid, which judges said would illegally discriminate against some of the most vulnerable people in society by excluding them from legal protection—yet further evidence of his reckless disregard for equal access to justice.

Another example comes with Grayling’s Criminal Justice and Courts Bill, which recently passed its final reading in the House of Lords. The Bill will make it much more difficult for applicants to pass the ‘permission stage’ of a judicial review by denying applicants legal aid until permission has been granted. It also introduces a ‘highly likely’ test that prevents challenges to illegal government decisions unless the results would have been substantially different had the government decisions been legal. This will make bringing ‘test cases’ more difficult, and will allow future governments to act with impunity, knowing they will be less likely to face a judicial review challenge.

The Bill furthermore dis-incentivises challenges to alleged government illegality by imposing potentially crushing costs orders on those who help to fund a judicial review but are not directly involved in the litigation. The ongoing financial viability of many public law firms and charities undertaking public interest litigation are being called into question by the reforms.

Opposition to Grayling has reached unprecedented levels. Polls go as far as to suggest that Tory voters are less likely to vote Conservative while he remains as Lord Chancellor. His time as Justice Secretary has been an unremitting disaster.

Amid the damage and despair caused by his reforms, the pretext of 800 years of Magna Carta is being reclaimed by those committed to the principles enshrined in that document. For example, Guy Standing celebrates the historic uses to which the Magna Carta has been put by oppressed classes at decisive moments throughout history.

In an increasingly unequal Britain, possessed of a legal system that cares less and less about society’s most vulnerable, a new people’s charter is sorely needed. Clause 40 of the Magna Carta provides enduring inspiration: ‘To no one will we sell, to no one deny or delay right or justice.’ Try though Grayling might to sell British justice to the highest bidder, and to exclude the poor from within its scope, the movement for an alternative vision for the legal system is already well underway. The battle over the meaning and ongoing significance of Magna Carta is but the latest front in the fight to save British justice.

Heathrow and the attack on 'undemocratic judicial activism'
'What hope of the courts riding to the constitution's…
Government to reverse Grayling's disastrous 'rehabilitation…
'All hands to the pump': courts to extend hours to clear 10…
Stepping up to the mark