‘I used to get put in segregation for saying my piece, now I get paid for it’

‘I used to get put in segregation for saying my piece, now I get paid for it’ 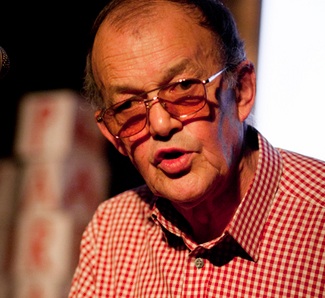 INTERVIEW: ‘In prison I used to get put in segregation for saying my piece and yet here I am giving my comments and my thoughts – and getting paid,’ reflects Eric Allison, the Guardian’s prison correspondent.

Eric Allison spent around 16 years behind bars, all for theft-related offences. In 2003, he applied for the job with the Guardian’ as the paper’s prison correspondent with nothing but a criminal record for a CV. He landed the job and for the last 10 years, he has transformed his life from prisoner to a prison reporter. He tells Christina Michaels how it happened.

Eric Allison’s criminal career started early. He received his first conviction for housebreaking at the age of 11 years and, three years on, received his first custodial sentence. Why did you get into so much trouble?
‘I was always pretty anti-authority. If somebody told me to do something, I’d go out of my way to not do it. I wasn’t very happy as a child. I had quite a bad stammer and a squint in my eye, and I used to get a lot of name-calling and I would fight them. I was always fighting as a kid, and I stopped going to secondary school. I was away from school far more then I attended.’

What was your first experience in custody like?
‘I ran away from home and broke into a day nursery to sleep. I was caught, put on probation and, when I was 14 years old, breached that probation – I stole a chewing gum machine. I was sentenced at the juvenile court in Manchester and two police officers took me down to Foston Hall detention centre, on the border of Staffordshire and Derbyshire.
It was December and it was dark when we got there. It was a big sort of gloomy Victorian building with barbed wire fence round.

We went into the reception area and this guy told me to stand on the white line and give my name, I said “Eric Allison” and I was going to say “Sir” but because of the stammer the “Sir” wouldn’t come out. The guy just walked across me, clenched his fist and punched me really hard across the face.

I was so frightened because I thought if he could assault me in front of two police officers, what were they going to do when the police were gone? I was terrified so much that I wet the bed in the cell that night. They put me in a dormitory with other kids who wet the bed and they used to wake us up every hour to go to the toilet whether we wanted to or not. We were knackered because it was run on the military lines. You’d never stop.’

What impact did the detention centre have on the young Eric?
‘The detention centre was meant to be a short sharp shock. The idea was to frighten the life out of us so we wouldn’t come back and, of course, it didn’t work. This comes back to the defiance, you start sticking together and it becomes “us against them”. You become determined not to let them win. You wouldn’t let the system beat you.’

Why did you keep offending?
‘Not many days would go by when I didn’t commit a crime. I loved the excitement. I got a buzz out of it. I miss that excitement even now. It was never about the money, it was actually the taking part. The buzz… I got a buzz from it without a shadow of a doubt.’

When did it get serious?
‘Around 1968, I was sent to Strangeways prison for four and a half years. This was the longest time I spent away in one go because I lost all the remission I may have got for good behaviour. In the 1960s, Strangeways was a stinking place, all the “slopping out” – there was no in-cell sanitation then, everything was lousy, visiting was lousy, the staff were lousy too. There were a lot of bullies, a lot of thugs. I spent a long time in segregation.’

I’ve been locked up with murderers, terrorists, rapists and psychopaths. You name it, even gangsters. I’ve seen a lot of examples of prisoners behaving badly towards one another, but if I was to list the worst 20 acts I’ve ever seen in prison, not one of them would be carried out by a prisoner.

I’ve seen six or seven prison officers beat people to pulp, with sticks, and I have had it, I’ve been beaten and battered myself. There had been times when I thought: “These bastards are going to kill me.”’

What did you make of the Strangeways riots? In 1990 some 147 staff and 47 prisoners were injured and there were two fatalities in a series of riots – much of the old prison was trashed.
‘I was out of prison, but I remember it. I had been somewhere Sunday morning and I came back home and my stepson said: “It’s gone off at Strangeways, it’s on the news”.

I drove down straight away and I saw them all on the roof and it was quite emotional. I had a very bad relationship with the place. I hated the place and to see these kids on the roof I actually felt quite jealous in a way. I wanted to be there on the roof. I took a loud-hailer down with me most days…  I was elated for them, but also concerned because I knew the ring leaders would pay a very heavy price – and so they did.’

In 1996 Allison was sent back to Strangeways, sentenced to seven years for scamming £1 million from Barclays Bank. This was the last time he was in jail, serving just over three years. How did things turn around?
‘When I went back in the 1990s everything had changed, but the biggest change was the attitude of the staff; all the thugs had gone. I had my own moral boundaries that I wouldn’t cross in crime. I thought in a way I’ve always been a good criminal, but when the system is cruel and unjust then the criminal becomes the victim.’

How did you cope with life on the outside?
‘Freedom is a funny thing, I came out just at the millennium but even now I get feelings, and I visit prisons quite a lot so it still takes me back. Prison changes you…It’s a bit like, you know, you… you sort of get solitude…

The first time I was in a cell on my own it was very lonely, and I found the loneliness quite difficult. You make a virtue out of a necessity and I began to embrace loneliness then. I find it difficult to live with people. I’m much better off living alone. I think prison has a lot to do with that.

How did you end up writing for the Guardian?
‘I’ve always enjoyed writing. It was always the one thing I was good at in school. I like words and I got my education in prison. The Guardian advertised for the position and I applied for the job. They wanted a 500 word essay and a CV, but my CV was all prison and crime. I never thought for one second that I would get the job. I didn’t even want it. I just thought I would tell them what was wrong with the prison system.

I couldn’t type. I didn’t know one end of the computer from the other. I had to start absolutely from scratch. When they said ‘the job’s yours’ I had to go away and think about it. I just knew it would be a massive change. I can’t remember when I didn’t steal… I was five or six when I started nicking stuff, I was quite frightened by the idea of being a straight go-er – and even now I feel like a bit of an imposter sometimes.

This will be my 11th year at the Guardian now, sometimes it seems as if I have been here all my life and other times it feels like I’ve just arrived. Occasionally I do stuff for ‘Comment is Free’ and they’re always very apologetic it’s only £90, but I say, “Are you kidding?” In prison I used to get put in segregation for saying my piece and yet here I am giving you my comments and my thoughts and getting paid…it’s odd.

If it hadn’t have been for the job at the Guardian, I’d  still be at it without a shadow of a doubt, because that would be the only thing I knew.

My eldest girl was at university while I was away and she had told me that somebody would say “What does your dad do? – “Oh my dad’s a thief” – but having got a job, she says “my dad writes for the Guardian”. That was a good moment.’

One response to “‘I used to get put in segregation for saying my piece, now I get paid for it’”