Human rights weakened in almost two-thirds of countries in 2017, according to an international survey measuring the rule of law in over 100 countries.

Non-discrimination, freedom of expression and religion, the right to privacy and workers’ rights were taken into account in calculating observance of fundamental rights across the world. Respondents’ belief in the protections afforded by such rights dropped in 71 of the 113 countries surveyed.

The Justice Gap has been working on the World Justice Project’s Rule of Law Index in conjunction with The Guardian’s Inequality Project. You read our first report here

The Index gathers data from over 110,000 households and 3,000 experts, assessing experiences of legal systems worldwide. From this data, researchers calculated weighted scores on a scale of 0 to 1 in eight separate categories. “We are witnessing a global deterioration in fundamental aspects of the rule of law,” said William H Neukom, the WJP’s founder.

Overall, more countries saw support for the rule of law worsen than improve in 2017, with 34% of scores decreasing as compared to the 2016 survey. In a category that measures the checks and balances on government powers, 64 of the 113 countries experienced a decline on last year.

The UK fell out of the top 10 in this year’s Index, dropping one place to 11th in the world. Scores for the accessibility and affordability of civil justice (0.52) are notably lower than comparable countries such as Denmark (0.76) and Germany (0.73). The score was closer to the USA’s 0.42 than it was to European counterparts. This comes in tandem with a relatively low score for guarantees of fundamental labour rights (0.68) when compared with Canada (0.77) and Austria (0.81).

The UK’s biggest decline came in measurements of the effectiveness of the correctional system, recorded at 0.53 – a figure lower than in the USA (0.58). This comes as little surprise given the ongoing prisons crisis and a series of highly critical inspection reports (such as the report on HMP Liverpool this month that revealed “squalid” conditions).

A high point for the UK was its scores for open government, which ranked 8th globally. However, compared with 2016, this year’s Index recorded reductions in the right to information (0.69) and the effectiveness of complaint mechanisms (0.80). There was also a worsening of measurements of the government’s respect for private property rights, which fell from 0.82 to 0.77.

Regulatory enforcement was also strong in the UK, with all scores in that category exceeding the average for high income countries. The UK’s high-ranking performance was the result of good scores in measurements of delays in administrative proceedings (0.88) and improper influence related to the enforcement of government regulations (0.91). 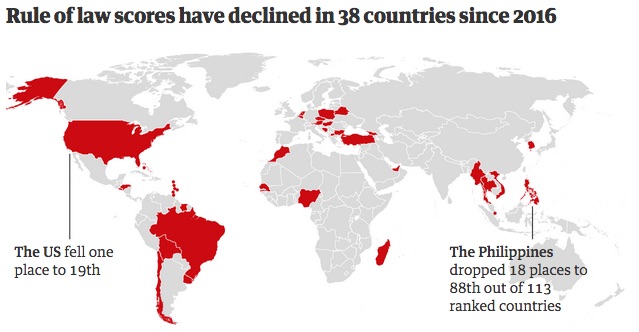 Elsewhere in the world
In the fundamental rights category, the USA fell five places to 26th in the global ranking. Worsening discrimination along with decreased guarantees of the right to life, security of the person and due process of law contributed to this downward trajectory. Measurements of discrimination in the American civil (0.48) and criminal (0.37) justice systems. These scores were substantially higher the rest of its income group: France scored 0.64 and 0.55 respectively, with Germany recording 0.84 and 0.72 and the UK scoring 0.69 in both categories.

Ranked number 19 in the world overall, the US also performed poorly on due process of law and, in particular, protection of the rights of the accused. This was compounded by a reduction from 0.46 to 0.37 in measurements of discrimination from the police and judges in criminal courts, suggesting that Americans generally believe they are not going to be treated fairly where crime is concerned. By comparison, the US’s northern neighbour Canada scored 0.60 in this category.

Professor Samuel Moyn of Yale University commented: “All signs point to a crisis not just for human rights, but also for the human rights movement. Within many states, human rights are falling prey to the backlash against a globalizing economy in which the rich are winning – but human rights movements have not historically set out to name or shame inequality.”

Once again, criminal justice systems around the world performed poorly. Few countries were considered to have a penal system that is effective in reducing criminal behaviour. On this measure, just four countries scored 0.80 or above, with an equal number scoring below 0.10.

The Philippines was this year’s worst performer by a distance. It dropped 18 places to 88th in the league table of 113 countries, on top of a slump of nine places in 2016’s survey. Suriname experienced the second most dramatic fall, losing 10 places to rank 69th. Despite only falling back by three places to 25th, Poland’s total score decreased at the same rate as the Philippines’. Other big movers included Burkina Faso, which rose by nine places to number 70. Iran has climbed 19 places in the past two years and now sits in 80th place.

In general, the Index suggests that the gap between high-scoring and low-scoring countries is shrinking. Rule of law was in decline in 24 of all countries above the median score. Of those below the median, 13 were worsening and 21 saw improvements.

Nonetheless, the top and bottom six countries remained the same, with Venezuela scoring lowest, closely followed by Cambodia and Afghanistan. Denmark and Norway came out on top.

This article was first published on the Justice Gap on February 2, 2018

Almost 4,000 prisoners have died as a result of…
Public values justice as much health or education,…
Benefits of legal aid significantly outweigh costs,…
Can law be represented in a comic?
Playing politics with human rights