Dean Strang who featured in the Netflix hit documentary Making a Murderer was speaking at a meeting at parliament on Tuesday to launch the Open Justice Charter, an initiative which comprises a series of demands for greater transparency and accountability in the justice system.

The charter, which features in the latest issue of Proof magazine, highlights the automatic destruction of court transcripts. ‘That the MoJ would destroy court transcripts at all, let alone after a period as short seven years, should deeply disturb all Britons,’ Dean Strang said in an interview for the Justice Gap ahead of the meeting. ‘When you have lost the transcript of trial proceedings you have made it, if not impossible, then a damned sight harder for anyone to review the safety or reliability of that conviction. I find that unacceptably haphazard.’

In an interview for Proof magazine, Strang’s colleague, Jerome Buting called the practice of destroying vital recordings of court proceedings ‘absolutely ludicrous’. Every hearing in the crown court must be recorded in full. Audio tape recordings of those hearings are destroyed after five years, and digital recordings are deleted after seven years under MoJ guidelines – this includes judge’s summing up which is widely considered essential for any chance of an appeal.

‘There is no excuse for the courts to not store forever – at least as long as the defendant is alive,’ Buting said. ‘Dean Strang said that ‘as a matter of sound public policy’ transcripts should be kept at least until a prisoner was released. The pair this week finished a UK speaking tour.

Speaking ahead of the charter launch, Michael Mansfield QC said that the Hillsborough inquests had put open justice issues into the spotlight. ‘The steady stream of British justice is in danger of becoming no more than a trickle,’ Mansfield, who acted for the Hillsborough families, told the Justice Gap. It has already been ‘deprived of the necessary public funding’ for the protection of rights, but Mansfield argued that ‘equally important’ was access to the record of proceedings, and case documentation ‘without which injustice can be washed away’.

‘The biggest challenge to our justice system in recent years has been delivered by the Hillsborough inquests. That was accomplished by disclosure and re-examination of documents. Shining the light on such matters rarely comes from inside the system itself but from the tireless efforts of those on the outside, invariably the victims and survivors often empowered by intrepid journalists. The need for this charter is now more important than ever.’
Michael Mansfield QC

You can read about the launch of the charter in an article by Owen Bowcott in the Guardian here.

The Open Justice Charter was drafted by Emily Bolton, founder at the Centre for Criminal Appeals together with Marika Henneberg from Portsmouth University, Dr Dennis Eady from Cardiff School of Law and the journalist Louise Shorter. It calls for greater access to records of court proceedings, police documentation, physical evidence for scientific testing, materials obtained by or produced by the Criminal Cases Review Commission, as well as easier access to prisoners. ‘It is a complete roadblock to investigating miscarriages of justice,’ Emily Bolton said. ‘What is the British system afraid of? It’s a public trial, and there should be an accessible record of it.’ 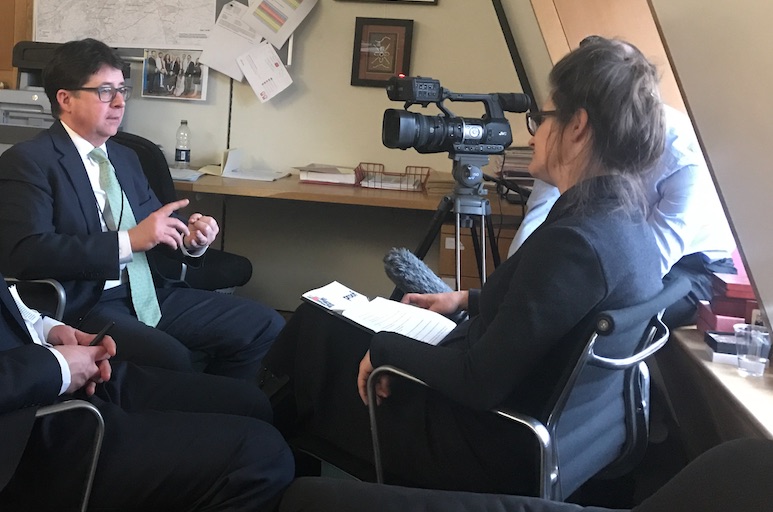 At the charter’s launch in Westminster, Dean Strang spoke to an audience of politicians, lawyers and journalists. He was asked for his views on cameras in court. ‘A judge who perceives that the public is watching wants to be on best behavior. They might want to be a paragon of judicial neutrality and dignity. Most of us want to be on best behavior if we think Mom’s watching,’ he said.

The lawyer was also asked for his views on the miscarriage of justice watchdog the Criminal Cases Review Commission. ‘The concept is just wonderful,’ he replied. ‘I am almost infatuated with the way in which the British press, and to some extent British lawyers, think of convictions being “unsafe”. The idea of a body that can take – in theory, at least – an objective look at the fairness and the reliability of the safety of a conviction and just cut through the technical barriers to relief that the judicial system invariably erects. It’s just a great idea – the implementation might be another problem altogether.’

Towards the end of the Making a Murderer series Dean Strang reflected on the dangers of an unquestioning belief in the infallibility of our courts. ‘Most of what ails our criminal justice system lie in an unwarranted certitude on the part of police officers, and prosecutors and defence lawyers and judges and jurors that they’re getting it right. That they’re simply right,’ he said. ‘Just a tragic lack of humility of everyone who participates in our criminal justice system.’

Strang was reminded of his critique. The lawyer said that he had attended a number of trials in a number of cities in the UK. Whilst he said that the differences were ‘hard to articulate intangible even’. ‘There is a sharpness to the elbows in American procedure, and a certitude – from the police officers, defence lawyers, prosecutors and judges – about the way in which all of us express the impossibility of us ever being wrong. There is a drift to the extremes in the way in which we advocate and an ugliness.’

He went on to say that the ‘lack of humility’ found its most dangerous expression in the ‘finality doctrine’ which ‘we hold on to so fiercely in the US’ that ‘every conviction must be final and cannot be revisited’.

‘The finality doctrine is the thing behind which we hide mistakes,’ he told the meeting. ‘That is why almost all the exonerations in the US are attributable to the dogged work of outsiders to the judicial system: law students, underpaid criminal law professors, people who work for charities… they are the ones who pursue justice, who pursue a case and sometimes secure an exoneration through DNA, uncovering false testimony.’

‘It does not speak well to a justice system where an innocent prisoner’s prospects turn on whether outsiders and volunteers will take on his case and stick with it for two, three, 10 years. That is not a system of justice. It is a system of chance. There is not much humility in that.’

Thanks to Barry Sheerman MP for hosting the meeting. We are also grateful Hodge Jones & Allen and Bowden Jones for their generous support.

Three-quarters of police officers have seen evidence…
Reimagining the law: Transcribing injustice
Lifting the veil on the family courts
#Jamaica50: Deportation charter flights and access…
Miscarriage of justice compensation fight to go to…