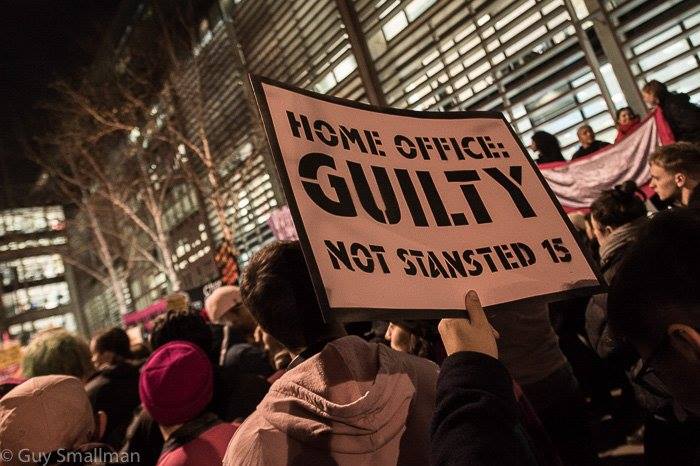 The Court of Appeal has quashed the convictions of the Stansted 15 in a judgement hailed by rights groups as a ‘victory for protest rights’. Giving judgement in the appeal, the Lord Chief Justice Lord Burnett of Maldon said that ‘the appellants should not have been prosecuted for the extremely serious offence… because their conduct did not satisfy the various elements of the offence’. ‘There was, in truth, no case to answer,’ he added.

Emma Hughes, one of the appellants, said that the Lord Chief Justice had ‘finally confirmed what seemed so obvious to us all along: we should never have been charged with this offence. The judgement leaves big questions for both the CPS and the then-Attorney General, MP Jeremy Wright.’ The Stansted 15 were prosecuted two years ago under the Aviation and Maritime Security Act 1990 (AMSA) for taking direct action against a deportation flight in March 2017. The activists broke into the Stansted airfield and used ‘lock-on’ devices to connect themselves around a plane, preventing its departure. The aircraft had been chartered by the Home Office to deport 60 individuals to various African countries, where the activists believed their lives would be at risk. The offence, which carries a maximum sentence of life imprisonment, had only been charged on one previous occasion when a man flew his helicopter directly at an airport control tower.

At trial, the fifteen were convicted of endangering safety at an aerodrome contrary to s1(2)(b) AMSA. Three of the group received suspended sentences with an unpaid work requirement, and the rest were given community orders. The decision to prosecute under legislation reserved for terror offences was denounced by human rights lawyers, campaign groups, and the United Nations Office of the High Commissioner for Human Rights, which urged the UK government to reconsider. Amnesty International described the prosecution itself as a ‘crushing blow for human rights in the UK’.

Overturning the decision of the trial court, Lord Burnett said, ‘both the crown’s case and the summing-up collapsed the distinction between risk and likely danger and treated the offence as if it were akin to a health and safety provision’. Of the 60 people who were due to leave the UK on the charter flight, 11 remain in the country. Five have since been granted leave to remain, including three on human rights grounds, one of whom was found to be a victim of trafficking. ‘The fight against the hostile environment doesn’t stop here,’ said Ben Smoke, one of the 15 to have their convictions quashed. ‘It was purely a political decision to bring those charges and we have been vindicated.’

‘To help us move closer to something that truly represents justice we need to challenge the cruel and racist logic that builds prisons and borders’, said May MacKeith, another member of the group. ‘That means stopping all deportation charter flights, closing all detention centres and ending automatic deportation of people who have been convicted of a crime. It means migrants should have the right to welfare support and not to be forced to live in appalling conditions or forced into unnecessary and dangerous reporting. It means dismantling the Home Office and enabling free movement for all.’