The journalist Raphael Rowe spent 12 years in prison as one of the M25 three for a crime he always maintained he did not commit. Freed in 2000 after the case went to the European Court of Human Rights, Gemma Blythe met with him to hear his story.

“I just wish I could forget what happened, but every day something – the slamming of a door, small rooms – reminds me of prison,” Raphael Rowe, the former lifer-now journalist, tells me. Rowe is charming, polite and candidly open. Not a stereotypical ex-offender. He no longer has his South East London accent, but a self-proclaimed BBC accent. He still has his Jamaican roots showing – his dreads.

Rowe grew up in South East London, on a council estate, with his parents and three older sisters. His dad was from Jamaica and his mum from London. He was expelled from secondary school due to his lack of attention and general bad behaviour. He was placed in an intermediary school with other boys ‘like him’. His parents could not afford to give him the things he wanted, so Rowe started looking for ways to get them. He was a teenager when he first got into trouble.

Rebellious and marginalised
At the age of 17, he was arrested for burglary. He was later arrested, charged and convicted. He spent 10 months in a Young Offenders Institute, surrounded by boys of a similar mind-set to his. He said “although it was not enjoyable, it was no deterrent”. He remembers music being played into his cell at 6am as a wakeup call. He would then have 30 minutes to get up, wash, dressed and make his bed military-style.

Once released, Rowe was back home with his parents, who tried to get him back on the straight and narrow. He was unruly at home and like many teenagers, rebellious and feeling marginalised.

Rowe was soon back in with the same crowd of friends and getting into trouble again.

When he was 19 years old, a friend asked him to share a bedsit. Rowe jumped at the chance. “This was my first taste of real freedom,” he says. He was on probation and started a journalism course at a local college but never finished it.

Whilst living in that bedsit, he remembers one night particularly well. “I was fast asleep, it was early hours of the morning. I woke up to lots of shouting and banging. A group of people in balaclavas, holding guns, stormed my bedroom, shouting at me to get on the floor.” It took him a while to work out it was the Metropolitan Police.

He was taken to the police station, with two others, and interrogated for three to four days. At first, he had no idea what it was about. He was being asked where he was on certain days and times, but he could not remember. In December 1988, Rowe was 20 years old. He was charged with murder and robbery and remanded to Brixton Prison. He was a Category A offender, therefore spent his days in a secure segregated unit, under constant watch.

M25 Three
Rowe recalls his time on remand. “I put all my energy into research and building my defence,” he says. He was aware of the story being front page news and calls for his hanging. He was a named member of the ‘M25 Three’.

The trial took place in January and February 1990 at The Old Bailey. Rowe told me: “I felt that justice would be done, and I would be released that day.”

“Prison then was very different to prison now. There was no sanitation in cells. I had to empty my own waste, had no TV and no play stations. I was a loner, keeping myself to myself, and emerging my energy into my case papers.”

He would continue to fight his wrongful conviction.

Rowe was moved around various prisons, but it was his time in Gartree Prison that would prove to be significant. He was sharing a secure area with the Birmingham 6, Cardiff 3, Winston Silcott and one of the Tottenham 3. Rowe was the youngest of them all and he saw them released one by one. There was a pact made inside that if someone was released, they would mention each other in media interviews.

Seeing the others released gave him hope that, one day, it would be his turn.

“One of the worst things seen in prison was when the cells were opened for us first thing in the morning and the gentleman in the cell opposite was hanging dead,” he recalls.

Rowe decided to start a journalism course. He was interviewed by a reporter from The Independent and a two double page spread appeared on his story. Other newspapers wanted to speak to him. Rowe was willing to accept segregation as a punishment for speaking to journalists on the telephone. He also went on hunger strike.

Rowe had access to a typewriter and spent his days analysing the case papers and making notes. He spent days reading Archbold, the leading text for defence lawyers, and became a self-taught expert on the criminal justice system. On the outside, his family were campaigning, handing out leaflets and spreading the word.

Finally in 1993, Rowe appealed his conviction at the Court of Appeal. His appeal was based on the lack of disclosure in relation to the reward money paid out by the Daily Mail newspaper. The Court ruled that their convictions were safe. The following year, Rowe made an application to the European Court of Human Rights.

In 1997, the Criminal Cases Review Commission was established up to investigate miscarriages of justice. The same year, the new body referred his case back to the Court of Appeal. Meanwhile, the the BBC’s Rough Justice programme, which investigated alleged miscarriages, secretly recorded an informant, in relation to a separate matter, who admitted to receiving the payout from the Mail. He was now aware that the police force had let this person continue altering statements when new evidence was discovered.

In 2000, the ECHR finally returned their judgment and found that there had been a violation of Article 6 of the European Convention on Human Rights, the right to a fair trial. At what turned out to be Rowe’s last hearing, the Court of Appeal stated “…we cannot say that any of these convictions is safe. They must be quashed and the appeals allowed. Ten years on it is not appropriate to order a retrial.”

Rowe was released and walked down the steps to his family.

“Despite a cast-iron alibi and no forensic evidence, I was sentenced to life. I’m not bitter and I don’t blame the criminal justice system. I blame those individuals who knowingly allowed this injustice to happen.”
Raphael Rowe

Damage limitation
Lord Justice Mantell finished his judgment by saying: “This is not a finding of innocence, far from it.”

Rowe says he “went into prison as a 20 year old boy and left a 32 year old man”. He wanted time to get to know his family again. Visiting for an hour or so, never gave them enough time to really get to know one another. Rowe took a year off, travelling the world and catching up on the life that he had missed.

Upon his return, Rowe used his journalism experience and started contacting journalists that he had met throughout his ordeal. One of them took him on a tour of BBC5Live. It was then that Rowe met Rod Liddle. Liddle offered him a job on the planning desk for the BBC 4’s Today programme. He could not handle sitting still, answering telephones and using computers. “I had been sitting down for 12 years,” he says. Rowe was then given the opportunity of working as a reporter. 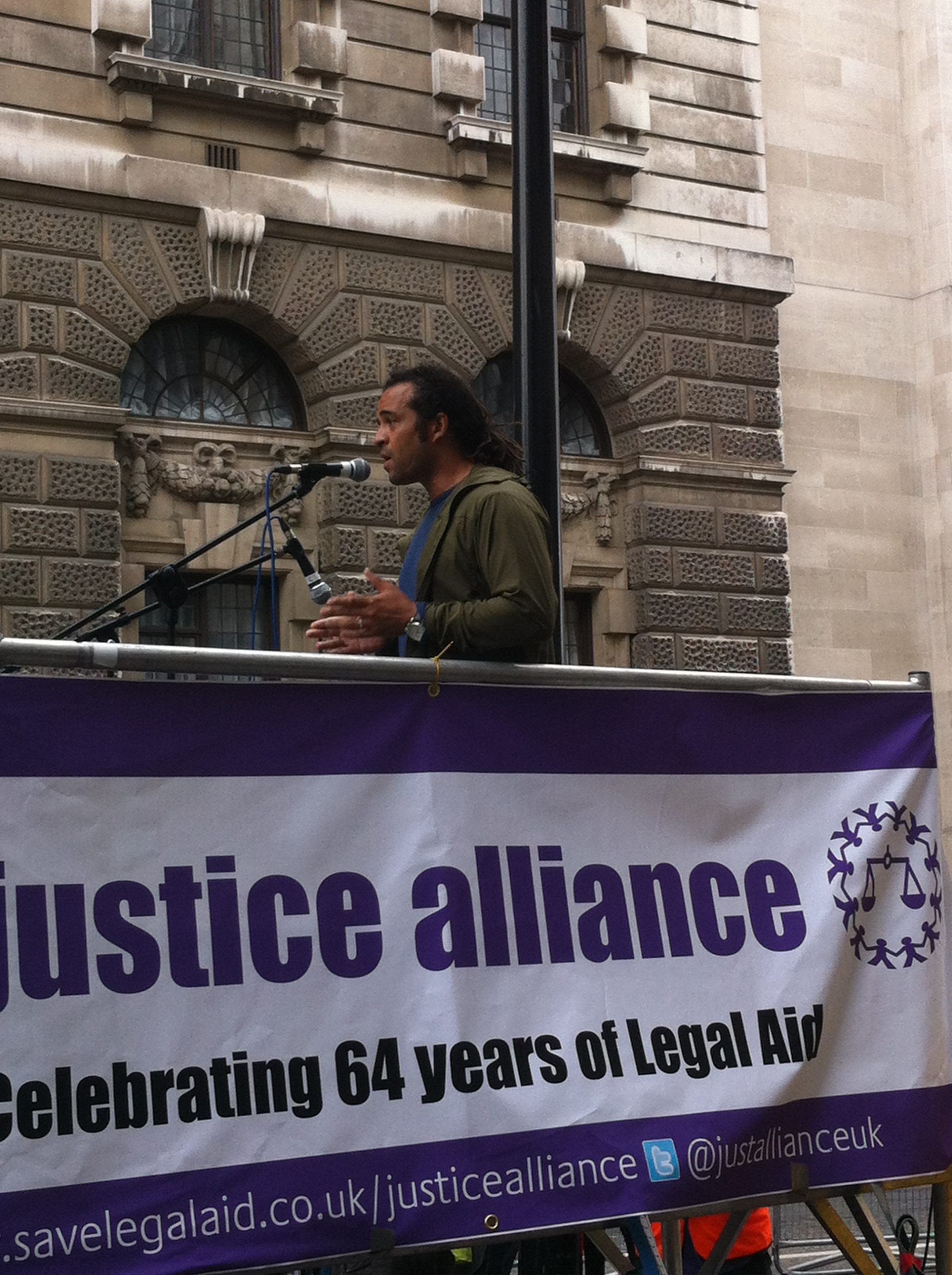 Rowe became the Today programme’s first mixed race reporter.Later, he worked for BBC Six O’Clock News, and then for BBC Panorama, where he still works today. He has smuggled diamonds from Sierra Leone ‘Blood Diamond’ and reported on the Barry George case – read about it HERE. Rowe says investigative journalism is the backbone of journalism and argues that there should be a space on mainstream television for programmes about miscarriages of justice. “It is something that affects us all, not just a selected few,” he says.

Rowe recently supported the campaign against cuts to legal aid. He addressed the Justice Alliance demo outside the Old Bailey last year – see HERE. “Without legal aid, I would not have had any legal representation at my original trial, first and second appeal, European Court of Human Rights and throughout the 12 years I was in prison,” he says. “Being able to secure legal aid ensured I had a solicitor, barrister and QC and it allowed me to change my representation as the years passed by. Without legal aid, I would still be a wrongly convicted prisoner and my family and I would still be campaigning to prove my innocence.”

Gemma is a caseworker at the criminal defence firm Tuckers

Our print magazine is Proof. Contributors include Michael Mansfield QC, Bob Woffinden, David Rose, Eric Allison and Ian Cobain.
Buy Proof Magazine
The latest issue (Why legal aid matters) includes Helena Kennedy QC and Martha Spurrier in conversation, David Conn on the legacy of Hillsborough - plus how to build your own law centre.
Gemma is a caseworker at the criminal defence firm Tuckers

One response to “Raphael Rowe: ‘Everyday something reminds me of prison’”

One in 10 children in young offender institutions…
Proof magazine: A different way of doing things
Surviving Injustice: One woman’s story of her…
Inquest begins of man found dead in cell held on…
Mother begins legal action against MoJ over child’s…