Bunting and the Olympic spirit

Bunting and the Olympic spirit 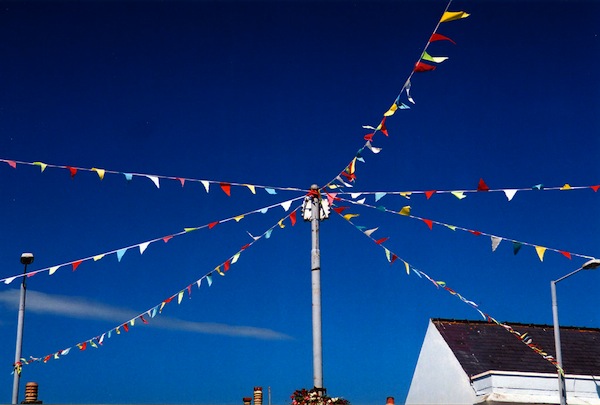 I’ve just been to see Hamdy Shahein. He’s the Stoke Newington newsagent who was strong-armed by Hackney’s Trading Standards and Police officers to take down his Olympic Torch Relay (TM) balloons and bunting on Saturday, 21 July 2012, wriiten by Kristin Heimark. Bunting pic by mrjamie.

He thanked me for my support – for everybody’s support – and for all of us getting the word out about the heavy-handed way in which he was dealt with in the hours before the Torch passed through Stoke Newington Church Street last Saturday. Since then, Hamdy says been visited by a number of reporters – and that he’s even been interviewed by a Chinese news agency. It does not surprise me that the Chinese have taken an interest in what happened to Hamdy – as our Government’s action was a move right out of the Beijing play-book. Mob-handed
While Hamdy’s not London’s Ai Weiwei, none of us expected a cadre of purple-shirted Olympic Delivery Authority apparatchiks would be deployed on the streets of Stoke Newington. Hamdy told me that he decked out his shop with the banners, bunting and balloons – and that a lady from the Council rushed up to him while he was finishing the trimmings and said: ‘Stop, stop! You can’t do this!’. At some stage, Hamdy said: ‘I’m trying to do something for my community and you’re ruining it’.

That may have been during his initial encounter with the Council officer – or it may have been after she gave up and returned mob-handed about an hour later – with Trading Standards officers and police in tow. The officers had him remove every strip of bunting and all of the balloons. Hamdy told them they could take down the banners themselves if they wanted – because he wasn’t going to do it.

Having seen the commotion unfolding real-time on Twitter, I thought I’d go get the Saturday papers from Hamdy and see for myself what was going on. Hamdy was in his shop holding helium balloons. I told him I’d heard what had happened – and saw he was livid. He showed me the official LOCOG hologram on his merchandise. I followed him out of the shop. He was seriously considering putting the balloons and bunting back up. That’s when I took this snap – of Hamdy defiantly holding his balloons.

Perhaps we were all naive to think that we had the freedom to join in the Olympic celebrations and to express those celebrations as we saw fit – as we did weeks earlier during the Diamond Jubilee. Who knew that manned CCTV control-centres would deploy travelling SWAT-teams of Council, police and ODA officers, ready to take down non-LOCOG compliant balloons and bunting at a moment’s notice? As somebody said to me: ‘In a way, I am impressed that Hackney Council managed to do its job for once. Too bad it was for the wrong thing”. Who knew this was the price to be paid for hosting the Olympics?

London Olympic Games and Paralympic Games Act 2006 legislation.gov.uk/ukpga/2006/12/… must be most draconian statue since the Defence of the Realm Act, — Jane Lambert (@nipclaw) July 23, 2012

This appears to be the host city contract for the Olympic games. I shall be analysing it shortly. gamesmonitor.org.uk/files/Host%20C… — Jane Lambert (@nipclaw) July 23, 2012

As you will see, in signing the contract in 2005, ‘we’ undertook to pass IOC dictated legislation – and did so with the London Olympic Games and Paralympic Games Act 2006. The power Parliament gave to itself – and ceded to the IOC is remarkable. While I don’t know (and I wonder if Hamdy even knows) by which specific section of the Act they ordered his bunting and balloons removed, the ‘Advertising’ section of the Act gives Council officers and Constables swift and draconian powers to enter premises and to dispose of any infringing material. But we already have perfectly adequate brand protection legislation. Why should LOCOG be a special case, with special SWAT-team enforcement powers?

If IOC didn’t like existing arrangements they should have been told where to stick their games. London is worth more than any sports fixture — Jane Lambert (@nipclaw) July 23, 2012

All of this reminds of the ‘Balloon Boy’ kid a few years ago. ‘You guys said we did this for the show’. I was pulling for that kid to make it out of that balloon alive – and was surprised and disappointed to learn it was all a hoax.  If we’d known the offer of hosting the Olympics would mean forfeiting our liberty and dignity for the show, would we have been so excited on 6 July 2005 to win the bid?