Miscarriage of justice compensation fight to go to Strasbourg

Miscarriage of justice compensation fight to go to Strasbourg

The legal fight on behalf of two wrongly convicted men for compensation for a total of 25 years behind bars is to go to Strasbourg. The latest development was announced at the launch of the latest issue of Proof magazine at the National Union of Journalists last night. Sam Hallam and Victor Nealon will take their test case to the European Court of Human Rights.

In January this year, the UK Supreme Court ruled that the 2014 regime which significantly narrowed eligibility for compensation for victims of miscarriages of justice was compatible with the presumption of innocence guaranteed under the European Convention of Human Rights, by Article 6(2).

The pair had been denied compensation by Chris Grayling during his controversial tenure as justice secretary under the coalition government’s Anti-Social Behaviour, Crime and Policing Act 2014 passed by the then home secretary, Theresa May.Under the new arrangements, to be eligible for compensation you now have to demonstrate your own innocence ‘beyond reasonable doubt’. It is a hurdle that reverses the presumption of innocence, and is almost impossible to surmount in the absence of DNA evidence. Nealon had his conviction for attempted rape overturned after DNA evidence pointed to another attacker.

According to the human rights group JUSTICE who intervened in the case, that ruling appears to depart from the case law of the European Court of Human Rights. The new regime defines a ‘miscarriage of justice’ as occurring when a new or newly discovered fact demonstrates that the person did not commit the offence.

‘It requires the person to prove, for the purposes of compensation, that they were innocent,’ explains JUSTICE. ‘Of course, once a conviction is quashed, an individual should be presumed innocent, as they have no longer been proven guilty. Requiring an individual to prove innocence reverses this fundamental rule of justice, placing a near impossible burden on the applicant for compensation.’

The group points out that ‘a further difficulty’ is that the Court of Appeal does not consider whether the appellant is ‘innocent; but whether the conviction was ‘unsafe’. ‘This is because the justice system determines guilt rather than innocence,’ the group says.

‘This area of law needs urgent and serious overhaul by Parliament to ensure that where miscarriage of justice occurs, there is appropriate reparation. People who have served years in prison and had their convictions quashed deserve support to try to rebuild their lives. This includes not only compensation but readily available and suitable accommodation, financial allowances, psychological treatment and a review of what went wrong.’
JUSTICE’s director, Andrea Coomber

The reform has virtually stopped money being paid out to victims of miscarriages of justice. There have been only five payouts in the last five years and not a single person last year. By contrast, between 1999 and 2004, there were 162 successful applications.

Speaking at the launch of Proof last night, Mark Newby, Victor Nealon’s solicitor explained that an application had now been made on behalf of the two men to the Strasbourg court.

‘How we treat the wrongfully convicted says everything about the sort of society we want to be,’ he said. ‘It should not be forgotten that the hurdle to even quash a wrongful conviction is set impossibly high and for those who have climbed that mountain it is just wrong to ask them to then scale the same mountain again and prove to the government beyond reasonable doubt that they are innocent.’ 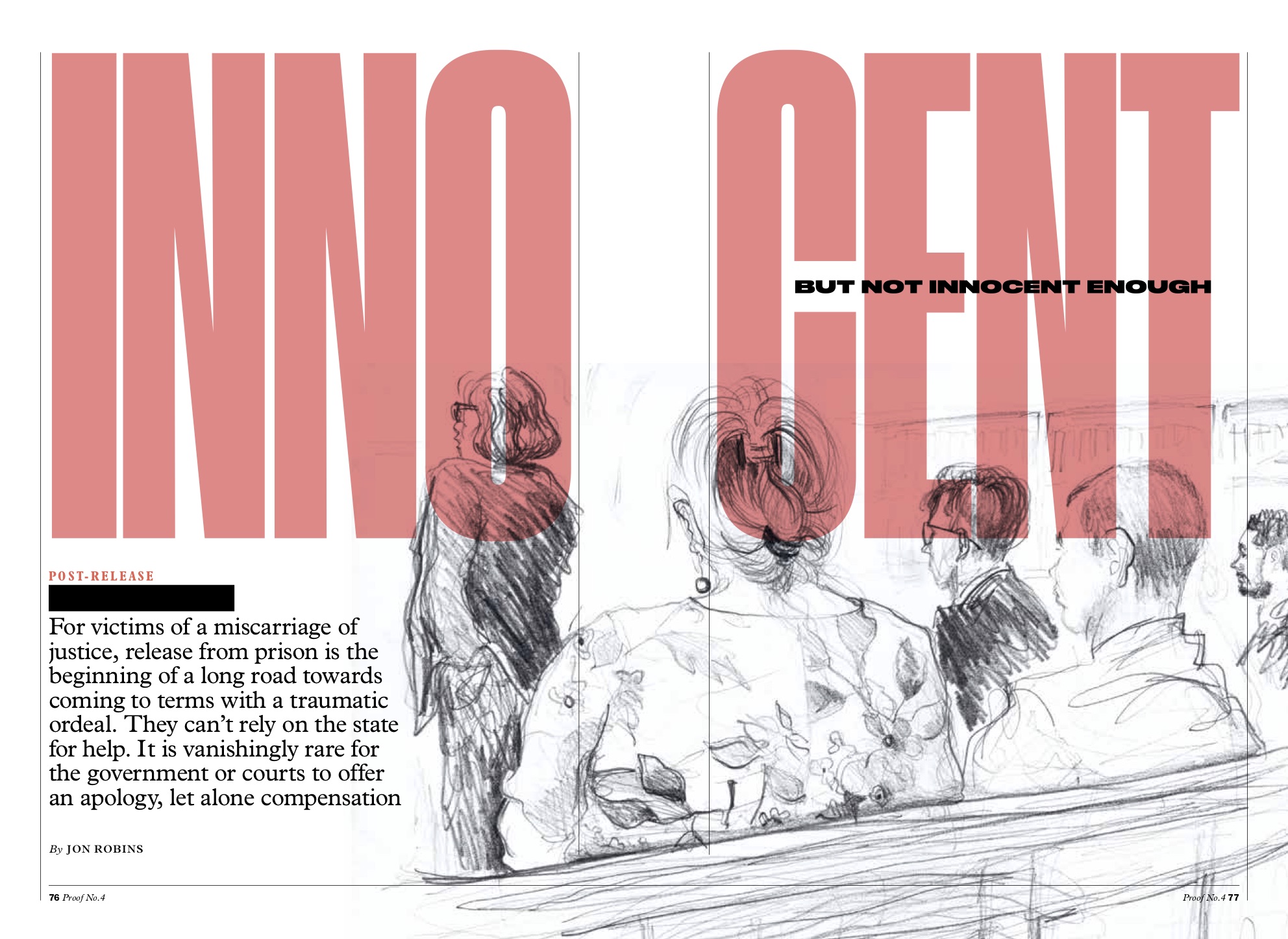 The following is an extract from Proof magazine, issue 4 by Jon Robins.

First, they are failed by the criminal justice system – in itself, often a serial failure involving police, prosecution, courts and their own lawyers – with devastating consequences for not only their lives but the lives of their loved ones as well. Then they are further failed by a penal system that uses the denial of privileg- es and parole to punish them for maintaining their innocence. Then, after all the wasted years, their trauma (and it is almost always traumatic) is compounded by the extreme reluctance of the courts to correct the original wrong.

Finally, if their conviction is overturned then, like Sam Hallam, they are undoubtedly innocent – and yet not innocent enough.’