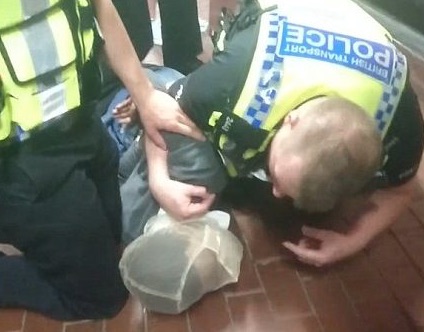 The Metropolitan Police announced yesterday their plans to roll out the trial use of spit hoods to all police custody centres across London, following a ‘successful’ initial period where the controversial devices were tested in just five custody suites in the north-east of the capital.

Spit hoods are made of mesh fabric, and are intended to prevent suspects from spitting or biting whilst being detained. Whilst the Met argues that the hoods offer reasonable protection to officers, their use have been deemed by many to constitute a breach of suspects’ rights, with the director of Liberty, Martha Spurrier, labelling spit hoods as ‘primitive, cruel and dangerous’, with their use provoking ‘huge fear, humiliation and even suffocation’.

The controversy surrounding spit hoods came to a head in July 2016, when British Transport Police used a spit hood when restraining Ik Aihie in London Bridge Station. The arrest was captured on film, which showed Aihie screaming as he was held down and hooded by officers. A witness said at the time that he had been treated ‘like a dog’, and Aihie himself said he was left ‘bruised and shaken’. The police watchdog is now investigating the incident.

The initial trial, which launched in December 2016, had suggested that the hoods were an ‘effective, proportionate and necessary piece of equipment when deployed correctly and with appropriate supervision’, according to the Met. They added that they had ‘discussed these plans with partner organisations, community representatives and independent groups, as well as magistrates.’

In response to the Met’s announcement yesterday, the Children’s Rights Alliance for England (CRAE) said that hooding children was ‘distressing and dangerous’. ‘The evidence shows that the children who are in contact with the police are disproportionately likely to have experienced neglect, abuse, been in care, have language or learning difficulties or other vulnerabilities,’ the group said. ‘Putting these children through more trauma by restraining and hooding them is not only damaging but potentially unsafe – adults have died following the use of spit hoods. Alternatives such as visors or spit guards worn by police officers are used in other forces in England to deal with disgusting incidents of spitting. The Met says, understandably, it needs to protect officers from harm but that mustn’t come at the cost of children’s safety.’

CRAE were also concerned that the decision has been taken without ‘first publishing an evaluation of the initial trial’. It continued: ‘There must now be a full, public consultation and safety assessment before any final decision is taken about the long term use of these potentially harmful spit hoods.’