#Jamaica50 deportations go ahead nine hours ahead of schedule

#Jamaica50 deportations go ahead nine hours ahead of schedule 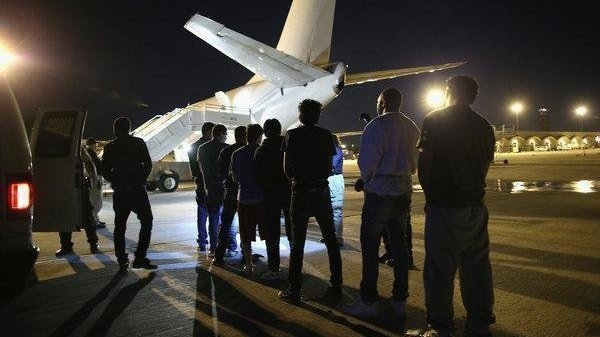 Despite outcry from human rights’ campaigners and MPs, a flight deporting fifty British Jamaicans took off at 1am this morning, nine hours ahead of the scheduled take off.

More than 60 MPs and peers signed a letter asking the Home Secretary not to go through with the deportations, whilst 82 Black public figures, including actor Thandie Newton, model Naomi Campbell and author Bernadine Evaristo have written to airlines who have previously worked on deportation charter flights pleading with them not to work with the government. Under UK law, the Home Secretary must make a deportation order against a ‘foreign criminal’, defined in the Act as someone who has been convicted of an offence and sentenced to 12 months’ imprisonment as a result. Speaking against the deportation, MP for Streatham Bell Ribeiro-Addy described the process of mass deportation as ‘notorious for bundling people out of the country without due process.’

UPDATE: doors are closed 😞, we do not know how many ended up on flight yet but we do know it will be far fewer than this rotten racist government wanted. And that’s because of all of u who took action & spoke out. #EndDeportations #StopTheFlight #Jamaica50

According to the Guardian, the Home Office made last minute concessions to Jamaica, agreeing not to deport Jamaican nationals who came to the UK as children. However, the Home Office maintains that the exceptions created for the Windrush generation do not apply to those with criminal records. Meanwhile, detainees are claiming that they have not yet had response from the home office to their applications and submissions, whilst at least one detainee was said to be struggling after ‘terrible’ previous representation. Speaking to immigration charity Detention Action, one detainee said: ‘I thought I was British until all this happened. As far as I was concerned, this is my country’. The deportation is continuing despite findings by the Equalities and Human Rights Commission that the Home Office broke equalities law in relation to the Windrush scandal.

The Home Office’s policy of deporting criminals who are non-British nationals has long been lambasted by human rights lawyers. Whilst the Immigration Rules require the Home Secretary to assess the impact deportation would have on an applicant’s right to family life, in practice parental separation from children is common. Movement for Justice, a civil rights organisation campaigning on behalf of immigrants, highlighted the case of a 57-year-old detainee with a wife and five children living in the UK, who had not reoffended since his release in 2014. Meanwhile the journalist Emily Goddard tweeted: ‘My heart is breaking. My nephew and niece’s dad is being deported to Jamaica tomorrow…how the hell do you explain to innocent 4 and 3 year old that their dad is not allowed in their home country?’

Speaking to the Guardian, the Home Office said, ‘We make no apology for seeking to remove dangerous foreign criminals to keep the public safe. Each week we remove foreign criminals from the UK to different countries who have no right to be here, this flight is no different.’

#Jamaica50: 'Our belief about our place in this country has…
#Jamaica50: ‘My kids are British nationals. Why should they…
#Jamaica50: Deportation charter flights and access to…
#Jamaica50 deportation flight leaves with just four people…
Appeal judges offer hope to offenders facing deportation…