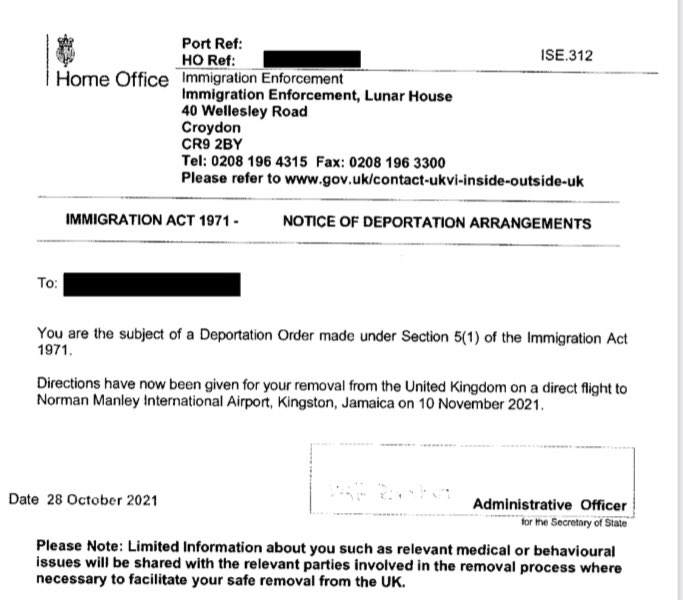 Reports have confirmed that the UK government is set to deport a number of Jamaican nationals on a deportation charter flight set for Wednesday November 10. The UK government’s use of deporting individuals en masse has been widely criticised by campaign groups and lawyers for a number of years. A common critique is that the Home Office do not assess the personal circumstances of the deportee adequately.

Often, last-minute legal challenges are required to showcase that scheduled deportees are potential victims of trafficking. Thus, rather than deportation to Jamaica, many are referred to the National Referral Mechanism – the national framework for ensuring potential victims of modern slavery receive adequate support. The government’s argument that ‘activist lawyers’ are representing people ‘without valid cases’ does not hold water. Put simply, a UK judge will not be able to order an injunction for a person to be taken off a deportation flight unless they are legally obligated to do so.

Here we go again. We can all look forward to another round of political vitriol, painting a picture of every person on the #Jamaica50 charter as a violent, dangerous man, who must be deported from to keep the nation safe. A 🧵 1/8

Despite the home secretary’s rhetoric that ‘last-minute tactics’ are being used by ‘activist lawyers’ to intentionally ‘delay and disrupt’ returns of people without valid cases; often last-minute legal challenges are being brought by people at risk of deportation due to ‘shambolic’ legal advice systems set up in removal centres. The UK government is currently facing a legal challenge over its provision of legal advice to individuals detained under immigration powers with claims that the current system forces ‘less than competent’ lawyers to represent them.

Former detainees had previously told The Independent the lawyers assigned by the government’s scheme did ‘nothing’ to assist with their case for weeks and it was only when NGOs intervened and put them in touch with an external lawyer that they effectively worked on their case. The home secretary’s use of charter flights has also been criticised as ‘expensive but ineffective’ after it emerged that the cost per deportee surged by 200% in four years. It was estimated that the Home Office spent almost £9 million on deportation charter flights in 2020, including £500,000 for planes that never took off from the UK. Shadow immigration minister Bambos Charalambous commented: ‘This is yet another example of incompetence from Conservative ministers at the Home Office, with the taxpayer left to pick up the bill.’

Commenting on the upcoming charter flight on 10 November, Maria Thomas, solicitor at Duncan Lewis commented: ‘You won’t be reminded that these men have been punished already and served their time in prison, and that the reason they’re seen as still dangerous and incapable of rehabilitation, seems to be simply that they are black men without British passports.’ ‘You won’t hear any of this from the gov’t, because it doesn’t fit the hostile, racist, and mind-numbingly unnuanced narrative the Home Secretary wants you to hear,’ continued Thomas.