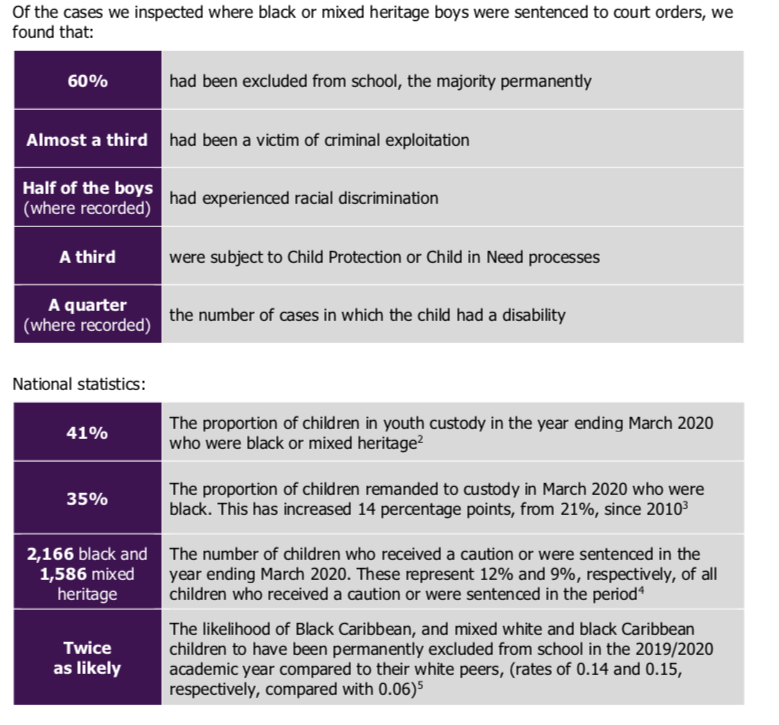 Half of all black boys subject to court orders suffered racial discrimination with many having a ‘fatalistic acceptance’ of their experiences, according to a prison watchdog. A new report from the HM Inspectorate of Probation into the experience of black and mixed heritage boys in the criminal justice system, inspecting nine youth offending services and 173 cases (59 out-of-court disposals and 114 court cases, here), called for ‘urgent improvement’ to tackle ‘insufficient’ services.

In the vast majority of cases, the impact of this discrimination had ‘not been explored or considered’. This was exacerbated by the failure of staff to raise concerns when they felt a child had been discriminated against. The inspectors recommended that this ‘should form the basis of any intervention’, particularly as a ‘striking feature’ of offending was that it was ‘grounded’ in the children’s environment.

Shadow justice minister David Lammy tweeted that it was ‘another damning report’.

Half of all black boys subject to court orders suffered racial discrimination.

Yet another damning report about the racism that continues to blight every part of the CJS that ministers will chose to ignore.https://t.co/LkU94hyelM

The impact of ‘stop and search’ on black boys was a ‘significant concern’, especially in London, with the practice often enforcing acceptance as being ‘just the way it is’. One boy reported being stopped and searched five times a week. According to the inspectors this was a ‘stressful experience’ that had become ‘become normalised and an accepted part of everyday life’. ‘Some of the boys who had moved from London to other parts of the country spoke of the relief they felt at being able to go about their daily activities without being stopped and searched,’ the report said. ‘When they reflected on this, they recognised the impact it had on their sense of wellbeing.’ The inspectorate recommended that the Home Office should release statistics on ‘stop and search’, broken down by ethnicity, to tackle the issue.

Inspectors reported a lack of understanding about disproportionality: 2.8 times as many black children come to the attention of the youth justice system as would be expected from the given population. This has been increasing since 2010, with the proportion of black children in custody rising by 14% from 21% in 2010 to 35% in 2021.

The report describes how ‘until recently, there had not been sufficient impetus to improve and deliver high-quality services’. Whilst it recognised the improvements made by the Youth Justice Board, these had ‘disproportionately benefitted white children’, recommending further measures and guidance to address these failures.

There was ‘stark shortfalls’ in the services provided to black boys, with recent cuts to funding for youth and community services cited as a challenge. Out of 164 staff surveyed, less than a quarter said they had access to the right specialist and mainstream services. The report described how the relationship between a child and their YOS worker was the ‘most important factor’ in supporting their engagement through the criminal justice system.

‘Living in a war zone’

‘The boys often live on large estates or in densely populated areas, where they have less control over who they come into contact with. In this setting, they do not have the same opportunities to opt in or out of relationships that other children might have. It is in these circumstances that they can become vulnerable to grooming and child criminal exploitation, something that we saw in a significant number of the cases that we looked at. One boy described his local area in London as a ‘war zone’, stating that making the wrong decisions can lead to being killed or sent to prison. Another child described the stress that he had felt living in London and the positive changes to his life brought about by moving to a new environment where he felt safe and supported.

‘I’m going to college on a part-time course and I play for a semi-professional football club… I’m in a different programme right now. I’m staying with family and they are keeping my head straight and making sure I don’t slip up. I feel that I am in a better place up here so everything is working great.’

It is well documented that, when children are exposed to a traumatic event, including violent crime, their response may vary. Some children become fearful. They may prefer to stay at home, and they may have trouble sleeping and concentrating in school. Some children exposed to violence start to resolve their own conflicts in a violent manner, especially if they don’t have access to the support and guidance that they need to help them. Others can become desensitised to violence and the pain and distress of other people. Some retreat into a shell, avoiding people and the world around them. Children with long-term exposure to violence are at an increased risk of: behavioural, psychological and physical problems; academic failure; alcohol and substance use; adolescent anti-social behaviour; and adult criminality. When children repeat the violence, they have experienced themselves without suitable and effective support and interventions, they can perpetuate a cycle of violence that continues through future generations. This reflects what we saw in the cases we looked at, where boys often had older siblings and other family members who had been involved in crime, and which had affected them in their formative years.’

Children 'set up to fail' on release from custody,…
Appeal judges uphold the Home Office’s Right to Rent…
Home Office’s 'no recourse to public funds' policy…
More than a third of black and minority ethnic…
The pursuit of racial justice and the limits of the law