Battle of the legal brands

Battle of the legal brands 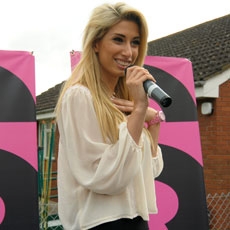 Eagle-eyed shoppers on the high streets of England and Wales might have detected the first signs of a ‘revolution’ in legal services: the appearance of the first national chain of law firms. There has never been a legal services brand (with the possible exception of Claims Direct in the accident claims market), however the exponential growth of QualitySolicitors – a solicitors’ marketing network which started in 2009 and now has some 220 ‘branches’ – is possibly the most conspicuous response by lawyers to the challenges of a newly deregulated legal services market.

Quality Act: The X Factor's very own Stacey Solomon at the launch of QualitySolicitors Lockings

The introduction of non-law businesses  into the legal services market – known as ABSs or alternative business structures – earlier this month on October 6 under the Legal Services Act 2007 marked the most radical innovation (as was reported here) and is commonly known  by the shorthand ‘Tesco Law’. Lawyers have likened the development to the City’s Big Bang, the mass deregulation of financial services and banking in the 1980s. ABSs allows for both the external ownership of law firms and the floating of legal practices on the stock exchange. Many traditional high street law firms fear competition (from established brands such as supermarkets, banks and insurers) moving into legal services.

Last Friday it was reported that the mid-market private equity firm Palamon Capital Partners had taken a majority stake in QualitySolicitors in what has been described as ‘the first major private equity investment’ in the sector. It will help them (in its words) become ‘the first Specsavers’ of the legal world. It might seem a peculiar ambition for a network of lawyers. However Specsavers was cited by the regulator Legal Services Board in a 2009 paper as a possible template for a legal franchise. Each Specsavers is an independent business owned jointly by the franchise and the practitioners which offers members economies of scale in terms of training an d support services as well as sufficient marketing clout to establish a brand. The analogy is apt because opticians, like lawyers, enjoyed a relatively charmed and protected life. However in the 1980s the optician’s monopoly came to an end with the introduction of a scheme allowing people to buy their glasses wherever they wanted. Deregulation led a small number of players (Vision Express, Boots Opticians, Dollond & Aitchison etc) capturing 70% of the market.

But QualitySolicitors is far from unique. There are other new solicitor-led networks including Face2face solicitors, Highstreetsolcitor.com and Loyalty Law. QualitySolicitors are ahead of the pack by some distance having secured a deal with WH Smiths whereby the lawyers have their pink and purple QS ‘legal access point’ kiosks (‘Free hotline: Pick up this phone and speak to your local QualitySolicitors…’) in the stationer’s stores.

There are plenty of commentators who remain unconvinced by the QualitySolicitors approach. Neil Kinsella, chief executive of the solicitor firm Russell Jones & Walker (which runs Claims Direct), reckons it’s a futile endeavour to build a brand out of the ‘solicitor’ concept. ‘A chocolate bar isn’t a brand. A Mars Bar is,’  he says. ‘At the heart of any brand are shared values. It’s difficult to build a brand around a disparate group of professionals coming together defensively. Different firms want different things.’ Kinsella predicts solicitors joining collective marketing schemes could be a passing fad like ‘gym membership’, where people sign up with the best of intentions one year, drop out the next.

Russell Jones and Walker announced last week that they planned to extend their ‘Claims Direct’ brand from accident claims to include employment and family law, wills and possibly even conveyancing. Retail giants such as the Co-Op, high street banks such as the Halifax plus membership organisations including the consumer group Which? and AA, insurers such as DAS have all expressed an interest in the legal services market.

If ever a movement was misnamed then it’s ‘Tesco Law’. Whilst Tesco’s has had the benefit of years of free advertising, it has yet to show any enthusiasm for the £25 billion legal services market, however its rival on the high street has. The Co-Operative Legal Services now employs 370 staff and aims to be one of the first ABSs. Every week 15 million Co-Op shoppers push their trolleys down the aisles of its 3,000 stores every week and, as they do so, they are subjected to the in-store radio heavily promoting legal services and when they checkout even the till displays plug their new foray. This will build on the retailers’ existing legal platform as some more than five million members have access to legal advice plus 1.3 million Co-Op insurance policyholders. According to a financial statement released earlier this year, the Co-Op’s legal services’ sales last year grew 19.2% to £24.2m.

Does the store plan to become the biggest high-street legal brand? ‘We already have more retail outlets than any other organisation in the country,’ Jonathan Gulliford, operations director with the Co-Op, said recently. ‘The brand exists – through the shops, banks, funeral parlours, and pharmacists. If there is one thing that the co-operative understands it is high Street. I am very confident that if that is what we decide what we are going to do that we would be able to do that very successfully.’ And was that decision pending? ‘Let me put my answer like this, I am convinced we will need a local presence.’

But what – if anything – does this mean for consumers? Should they expect a better deal? Yes, theoretically at least, as David Edmonds, chairman of the Legal Services Board, explains here. ‘We expect ABS to widen access to justice. The new competitive pressures and impetus towards innovation should increase the availability and reach of legal services. As services are delivered more flexibly, providers will find ways to bring the prices down both for consumers’.

The hope is that increased competition will lead to a better service for consumers. Craig Holt, chief exec at QualitySolicitors, has spoken about using the private equity deal to improve customer service including ‘Saturday opening, fixed fees and free initial consultations.’ None of that seems remotely revolutionary in its ambition. Many consumers will be surprised to hear that they aren’t standard.

What consumers want is accessibility, stronger customer service standards and, above all, transparency and certainty on costs. Let’s see what happens.

2 responses to “Battle of the legal brands”

Law Society predicts 'market collapse' as one in 10 defence…
Victims of trafficking failed as a result of legal aid…
Huge 'gulf' revealed between demand for immigration advice…
Droughts and deserts: a study of legal aid market failure
Rape allegations in the military to be dealt with outside…