A bitter pill: the epilim familes fight on

A bitter pill: the epilim familes fight on 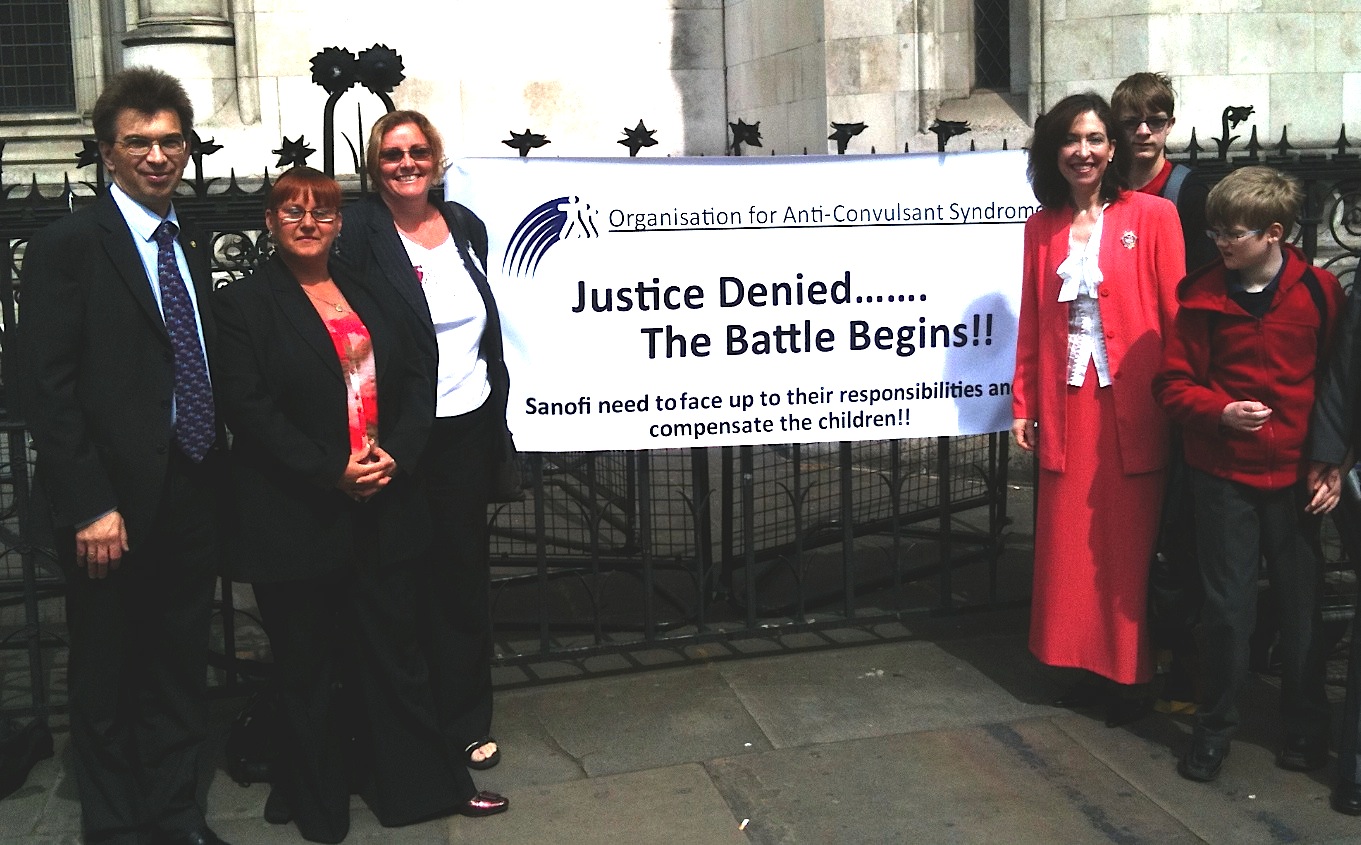 Last year, the legal action involving 100 families seeking compensation on behalf of their children against the anti-convulsant Epilim came to a premature end, writes Janet Williams. You can read more on www.thejusticegap.com HERE and  HERE. The families, suing over a range of birth defects – spina bifida, heart damage, cleft palates, deformed hands and feet, etc – allege that the manufacturer Sanofi Aventis was to blame – a claim the company disputes. Eplim contains the controversial anti-convulsant called sodium valproate.

‘We never intended giving up. The court room was the end of one chapter, so this is the start of a new chapter.’ Janet Stockley-Pollard

The whole point of what’s known as the FACs – or Fetal Anticonvulsant – litigation was not only to prove that the drug sodium valproate was a defective product but to also ensure that the children who had been affected were financially taken care of by the pharmaceutical company who had caused their disabilities instead of the taxpayer.

Families lives had already been shattered in the 1990s with the collapse of the clinical negligence cases against the NHS, then in 2005 the separate product liability case took shape and the FACS children were given another chance to prove their case. This was no easy ride, and the first hurdle came in 2006 when the funding was withdrawn for the first time by the Legal Services Commission which runs the legal aid scheme in England and Wales. It took 12 months to fight and a judicial review to get that funding reinstated.

Millions wasted
By 2009 the LSC had spent £3.4 million on the case yet – with only two weeks to go – they decided that the case wasn’t strong enough to win in court and the funding, yet again, was withdrawn. The trial was only two weeks’ away and was only going cost a further £750,000 but instead the LSC chose to throw away £3.4 million of taxpayers’ money.

The more we pushed by way of a petition to Downing St, the less we were listened to with the Minister for Justice, Ken Clarke – passing the book – saying it was the decision of the LSC and refusing to take the matter up.

It is totally ridiculous the way these children have been treated since the 1990s and it seems obvious that the Government totally refuses to recognise or accept any responsibility for the damages caused to the children or the amount of taxpayers’ money which has been wasted. Instead an immense amount of money will continue to be spent within the services these children will need for the rest of their lives – health, educational, social services and benefits support – costing millions of pounds, money which the Government is claiming it has not got. Yet it was they who chose the plight of the FAC litigation wasting taxpayers’ money – not once but twice.

Inefficiency of the law
We feel it is time to show the inefficiency of the legal system. Where is the fairness in a child being damaged by a medicine its mother has been prescribed without any information of the damages caused by it? Yet the Government don’t want to admit these children have been treated unfairly by the very people supposed to take care of them. They don’t want to admit to the injustice to children who have been damage by a medicine given by the NHS and then refuse to make the Pharmaceutical company responsible pay for their mistakes. They don’t want to admit either to the ignorance of the MHRA who have turned a blind eye to the problems, that they know are caused by this medication when they could, like so many other drugs, encouraged the pharmaceutical company to revisit and improve the drug.

In this instance the Government have failed these children and will continue to do so unless they face up to their responsibilities and financially offer to support the children affected and their families.

I was never told of FACS Syndrome whilst taking the prescribed medicine Epilim – not by doctors, GPs, midwives. This in itself is an incredible injustice. As a patient with a health condition, all trust is put into the doctors who are looking after you for the condition you are diagnosed with.

As a result of this I have five children who are diagnosed with FACS Syndrome. As a family, we have had diagnoses of cerebral palsy, speech delay, severe valgus foot, incontinence, asthma, autistic spectrum disorders, noise intolerance, hypermobility of limbs, premature births… all symptoms of FACS Syndrome, all have been established, and life proves very tough.

My two children who have cerebral palsy have to wear splints; my daughter walks on a frame and receives regular botox injections and they both require regular physiotherapy and are statemented at school. Hospital appointments for all five of the children are endless. They are very happy children and aware of their difficulties but that doesn’t stop their determination to get on in life.

I wouldn’t change my children and love them unconditionally, but the guilt of taking the prescribed medication for myself, having now impacted their life is overwhelming.

This is happening up and down the country. Parents are oblivious as health professionals don’t give the correct warnings. How can the government allow this to carry on? Babies are being born with this debilitating illness and yet there is nothing for them. This condition is not going to go away, the numbers of children affected will just continue to rise and rise. As parents and children we never asked for this in our lives. It was put upon us through the failure of the government, Medicines Board and the drug company, yet it isn’t them left with the dreadful and heartbreaking consequences.

The response from my blog (emma4oacs.wordpress.com) is amazing. Parents now coming forward who are pregnant on these meds and never been told, or even heard of this condition. Some of the mums have taken the meds and are now seeing symptoms in their children.

This article is written by Janet Williams with Emma Downes, of the Fetal Anti-Convulsant Trust and vice secretary/fundraiser for OACS, the Organisation for Anti-Convulsant Syndrome.

4 responses to “A bitter pill: the epilim familes fight on”

No accountability: who is responsible for rising…

'If every crisis is an opportunity, this is one we…

Miscarriage of justice compensation fight to go to…