If the government wants to tackle racism in the justice system, ditch joint enterprise

If the government wants to tackle racism in the justice system, ditch joint enterprise

If the government seriously wants to tackle racism in the justice system – and they are genuinely concerned about the disproportionate number of black men locked up in British prisons – then they need to tackle joint enterprise as a matter of urgency.

If David Lammy, who this weekend was appointed to head up the government’s review of racism in the justice system, wants a body of evidence to support the unstoppable momentum for change, can I recommend he read a new report published by the Centre for Crime and Justice Studies (CCJS) published last week?

For all the concern about the racist and indiscriminate application of what is a discredited common law doctrine, we know precious little about it – until now. Shockingly, the Crown Prosecution Service does not hold records on how often, and in what cases joint enterprise is used to prosecute. The new study – Dangerous associations: joint enterprise, gangs and racism (PDF) – shines some light into the darkness. It draws on a survey completed by 241 of JENGbA prisoners. We sent out 550 questionnaires.

Over half of all respondents (53%) described themselves as black, Asian and minority ethnic (BAME) – to put this into context, less than one in five prisoners are from that group (18%). All but 10 of the JENGbA respondents (4%) were serving JE sentences for murder; nearly a quarter (23%) claimed to have no previous convictions; and almost half (48%) were under 25 years old. Of this younger group, they were on average serving sentences of 20 years.

Such serious punishment for young and often vulnerable people would be of concern in any event; but in the context of the flawed nature of joint enterprise.

The average number of co-defendants prosecuted for each case was four with a maximum of 26 individuals. That’s close to 600 individuals implicated in JE convictions, just from the small sample of the JENGbA cases.

Whilst six out of 10 of the JENGbA prisoners (59%) reckoned that the term ‘gang’ was cited in their trials, only a tiny number – five prisoners – claimed to have actually been as gang-members.

There was a launch for the CCJS report in the House of Commons last Tuesday. A panel was chaired by the former chief Andrew Mitchell MP; Lord Alan Beith who headed up the House of Commons’ justice committee for its joint enterprise investigation which at the end of 2014 called for an urgent review; and the shadow justice minister Andy Slaughter MP.

JENGbA families from all over the country turned out in numbers, but it was a positive sign to see so many MPs as well as members of the Upper House. Alan Beith recgnised that the CCJS study added to the concerns identified by his committee (and said that the mandatory life sentence even if an individual had been on the periphery of a crime was ‘an absolute travesty’). The committee’s new chair, the Conservative MP Robert Neil said that joint enterprise ‘does not operate justly’.

Andy Slaughter thanked us for keeping him ‘on his toes’ (no problem there – and we are not going anywhere). It was good see other MPs lending their support, for example, Kate Osamor, the new MP for Enfield who grew up in Tottenham and has seen her community damaged by unfair JE prosecutions; and Steven Pound, Labour MP for Ealing. I have spoken to Stephen frequently – from the day Kenneth Alexander was convicted. ‘We haven’t said enough about the suffering of people swept up with this absurd law. [JE] is wrong at every level. This is injustice writ large,’ the MP said.

I asked the panel if we win – and there is a reform – will the all the prisoners sentences be reviewed (or will they be abandoned like the IPP prisoners)? The panel told us to keep the pressure up. Of course, we will. None of us will give up on our loved ones.

The report included a letter that the Met Police had been handing out in London housing estates – as featured on the Justice Gap (and in an article by the Justice Gap editor Jon Robins for the Independent on Sunday). 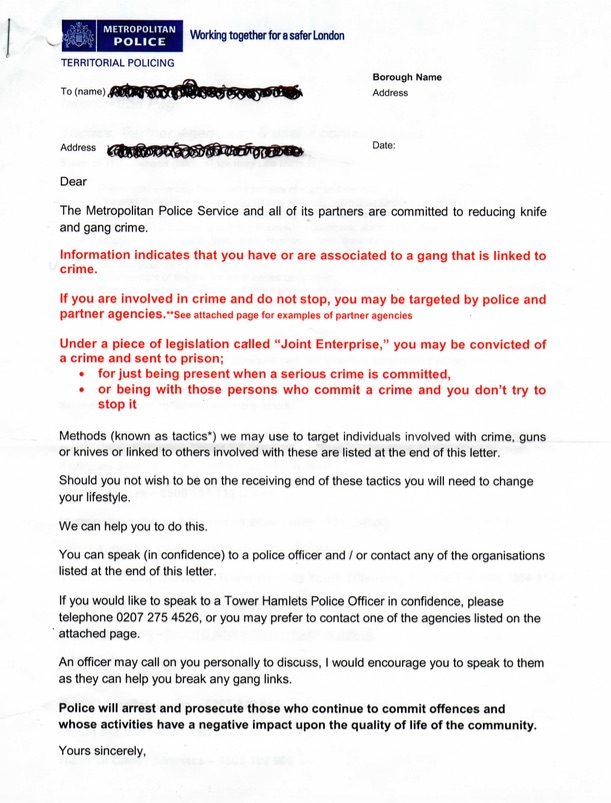 This letter from the Met stated that:

‘Under a piece of legislation called “Joint Enterprise,” you may be convicted of a crime and sent to prison:

* for just being present when a serious crime is committed,

* or being with those persons who commit a crime and you don’t try to stop it.’

If the police can’t get the law right, then frankly what hope is there? The CCJS reckons the Met’s letter was the ‘latest, and perhaps the ultimate conflation’ of dubious policing and prosecution strategies’.

We have known for some years that JE disproportionally targets young black, Asian and minority ethnic (BAME) people. We know it is ‘institutionally racist’. The ‘gang’ label is so lazily and inaccurately applied in JE prosecutions. We have a case where the judge conceded that five black children between 13 and 15 years old ‘might not have been in a gang’ – they were walking home from school – but, he said, ‘you were a gang on the day’. The new study finally puts our anecdotal evidence into a coherent argument backed by robust research.

We have a reached a tipping point. Thanks to the CCJS, Patrick Williams and Becky Clarke of Manchester Metropolitan University. Lord Herman Ouseley, JENGbA’s patron also attending said, ‘This has been a long time coming. We must keep the issue of joint enterprise front and centre.’

We plan to – over to you, David Lammy.