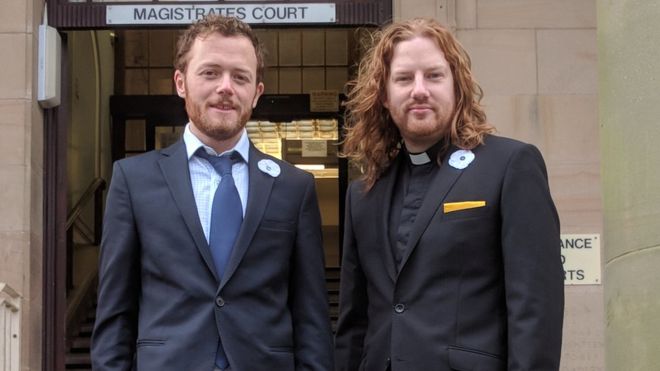 ‘We were about three metres away from the first plane when we got caught,’ says Dan Woodhouse, a  Methodist minister who broke into a BAE Systems airbase this January. Along with fellow peace activist Sam Walton, Woodhouse had hoped to prevent British arms from making their way to Saudi Arabia. The pair was charged with causing £1,000 of criminal damage without a lawful excuse, but were recently acquitted at Burnley Magistrates’ Court. A district judge accepted their argument that they had acted for the greater good.

Woodhouse and Walton, both experienced anti-arms activists, decided to take direct action because, in their view, they had exhausted all efforts to lobby MPs, demonstrate and sign petitions. ‘There’s a point when normal campaigning just doesn’t work because the government doesn’t want to hear it,’ Woodhouse suggests. ‘They just want to sell more weapons to Saudi. In the face of that, all you can do is civil disobedience. Sam and I didn’t want to do this action but we had to because there were no other options. There was nothing left for us to do but to try and physically disarm the planes ourselves.’

Months of planning ensued. Plane-spotting websites helped them work out that British planes were stationed at BAE Warton, and careful research told them that they would be heading to Saudi Arabia in a matter of months. ‘BAE Warton is responsible for 50% of the British planes that go to Saudi,’ argues Woodhouse. From there, he says, the planes would form part of a bombing campaign inflicting on war-torn Yemen.

By the last Sunday of January, Woodhouse and Walton’s plans were in place. They set off early, bound for the BAE site halfway along the Ribble Estuary that spreads from Preston to Blackpool. ‘If we stopped the planes, we saved lives. That was the logic,’ says Woodhouse. If all went to plan, they believed they would disable the best part of £1 billion-worth of planes.

Almost three years of civil war have ravaged Yemen, killing thousands of civilians and leaving millions at risk of malnutrition and disease. Saudi Arabian forces, backing the Yemeni government against the insurgent Houthis, have been accused of orchestrating airstrikes targeting infrastructure and the water supply. Since April, reports suggest that over 700,000 people have suffered from a cholera outbreak.

When they were arrested after just a couple of hours on the base, Woodhouse and Walton freely admitted what they had done and were released on bail. Woodhouse returned to his three congregations who, well aware of his campaigning activities, received the news with a mixture of enthusiastic support, confusion and disapproval.

At this stage, the pair ‘felt pretty confident’ that they would be acquitted. ‘We assumed it would be a jury trial,’ says Woodhouse. ‘When it’s a Quaker and a Methodist minister of good character trying to disarm planes bound for war crimes in Yemen, which the UK government and BAE Systems are complicit in, it tends to be that juries will acquit.’

A few months later, the pair discovered that they would appear in front of a judge, charged with causing criminal damage worth £1,000 without lawful excuse. The charge fell short of the £5,000 threshold that secures a jury trial, which Woodhouse puts down to BAE’s desire to avoid publicity and boost the chances of conviction. After an application for legal aid was refused on the merits of their case, Woodhouse and Walton funded their legal costs with over £12,000 donated through a CrowdJustice campaign.

By the time they arrived at court in late October, though, they feared that they would be found guilty. ‘It was going to be a lot more difficult to argue reasonableness,’ Woodhouse suggests, recalling the events of the trial. ‘The prosecution was saying that damage to a fence couldn’t stop war crimes. By the end of the second day, we weren’t that optimistic.’

At the end of their four-day trial, they were found not guilty. Woodhouse and Walton, a Quaker, had relied on their religious beliefs as a defence, arguing that this gave them a lawful excuse for their actions in combination with their political motives. They remain convinced that they were doing the right thing. ‘It shouldn’t be a first port of call,’ Woodhouse emphasises. ‘This is over a decade of campaigning to stop this, getting nowhere. It was reasonable for us to do £1,000 of criminal damage in order to stop mass devastation within Yemen.’

‘We smashed up part of a door. We cut our way through a fence – carefully, I might add. We absolutely did criminal damage to that base, and a judge said, “you are not guilty of any crime because it was reasonable under the circumstances.”’

Room for protest
Woodhouse and Walton are not the first peace activists to brush up against the law. Over two decades ago, Angie Zelter sabotaged a BAE aeroplane at Warton along with three others, inflicting £1.5 million of damage. The Ploughshare Four were acquitted in 1996 after arguing that they had been trying to prevent genocide in Indonesia. Zelter’s most recent arrest took place this September, after she protested at the Defence and Security Equipment International (DSEI) arms fair.

Mike Schwarz, a partner at Bindmans who acted as the pair’s solicitor, has a long history of representing campaigners, including the UK Uncut protesters arrested in Fortnum & Mason in 2011. He also defended Toby Olditch and Philip Pritchard, who were acquitted after trying to immobilise planes at the start of the Iraq War.

Expressing his concern about the courts’ increased hostility to so-called ‘justification’ defences in cases like these, Schwarz says: ‘The higher reaches of the judicial hierarchy seem less and less inclined to trust jurors, magistrates and local district judges to gauge whether campaigners had a legal “justification” for their actions, and so take this into account when deciding on guilt and innocence.’

‘Dan and Sam’s case was a success in its own right but also bucked a trend among more senior judges, who set legally binding precedents from central London, which have limited the scope for lower courts to consider so-called “justification” defences like those put forward by Dan and Sam.’

Schwarz believes that a healthy democracy should always allow space for protest and dissent. He refers to the words of Lord Justice Hoffman’s judgment in the famous 2006 protest case, R v Jones: ‘civil disobedience on conscientious grounds has a long and honourable tradition in this country. People who break the law to affirm their beliefs in the injustice of a law or government action are sometimes vindicated by history.’

‘Sadly, for some,’ Schwarz comments, ‘the “accommodation” the State makes for protest is increasingly limited to relatively lenient sentences, rather than acceptance of the principle of protest and the causes which lead campaigners to put their necks on the line.’

This article was published on November 10, 2017

Arms sales to Saudi Arabia unlawful, court rules
World’s largest arms fair opens despite week-long protests
'We are not terrorists': Stansted 15 to appeal
Protesters cleared of all charges by jury despite…
Right to trial by jury could be restricted to ease…