A Christian prisoner shows his muscles and fists at Wandsworth prison in London..HMP Wandsworth in South West London was built in 1851 and is one of the largest prisons in Western Europe. It has a capacity of 1456 prisoners.

INTERVIEW: ‘I can see the writing is on the wall.  Prisons are just going downhill, mark my words, that’s why I don’t get involved,’ says Leroy Smith, ex-prisoner, ex-gunman, and author of new autobiography Out of the Box. ‘The government is going in hard. It will go pear-shaped: some screws are going to die, some prisoners are gonna die, and a couple of prisons will burn down. But until such time, it’s just going to spiral down until it blows up.’ 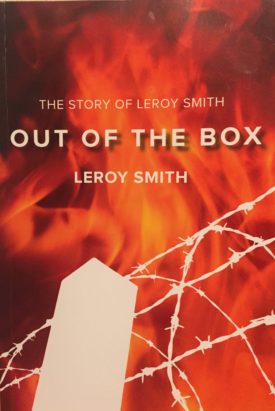 To those who know his name, Smith is ‘that guy who shot two cops’. After spending 20 years in prison for attempted murder, ‘that guy’ has now written a book. Out of the Box provides a rare insight into the reality of life in London’s criminal scene, both within and beyond the walls of Britain’s high security prison estate. I spoke to Smith about his book’s message and who he is trying to reach with it.

‘All academics, lawyers and people who are trying to be lawyers need to read this book and study it to understand where some people are coming from,’ he tells me over the phone. ‘It will serve them well.’

Smith’s mother was murdered when he was two years old and he grew up without his father’s presence. The book is an easy read which reveals a genuine desire to connect with people facing similarly difficult circumstances.

Turning to robbery as a teenager, Smith eventually found a gun in one of the rural houses that he regularly stole from. In one memorable scene, he recalls the power he felt holding the weapon. From that moment on he became a gunman, gaining a reputation in London and beyond as one of a minority of criminals who knew how to handle a firearm and weren’t afraid to do so.

Then in 1993, while ‘at large’ having escaped custody in relation to a different offence, Smith was approached by two police officers outside a Brixton bar. Fearing re-arrest and conviction, he shot and wounded the police officers before fleeing the country. His tumultuous flight was to take him to the United States, where he was finally captured and extradited to face trial in the UK.

In a measured, unemotional fashion, Smith reflects on the fateful altercation in Brixton. The English police, he says in the book, are unlike cops in most other countries, most of whom would be far more willing to comply when they find themselves on the wrong end of a gun. I ask him to explain.

‘I don’t think it’s anything to be admired. It’s stupid,’ he says of police stubbornness. ‘You’ve got to be dumb, but that’s what [the English police] are like. They’ve had such a long run for so long. They just think they’re really hot and special. That’s why when those things happen to police, they can’t believe it. And that’s why they go so ballistic, because they just can’t believe that someone would do that to their uniform.’

Smith doesn’t dwell on his past crimes and seems largely unapologetic. Most will take offence at his attitude, and it’s clear that he doesn’t mind stirring a bit of controversy. There is an apparent conflict that is never resolved in the book: unrepentant cop shooter, on the one hand, and willing mentor for disenfranchised black youth. In a recent interview with the Guardian, Smith said: ‘All I am doing is putting my life story out there in the hope that it prevents anybody else, especially underprivileged black young men, from taking the same path.’

His book offers an unprecedented insight into London’s criminal underworld. Smith charts the highs of a £10,000 per day income, and the power and sex that came with it, as well as the lows of paranoia, violence and high security prison. Criminal lifestyles are often mired in cliché and faux-glamour. Out of the Box tells an alternative, more convincing tale. It is authentic and shocking throughout.

Could his career have followed a less violent trajectory? ‘If life had dealt me another hand, then I could have gone down a different path. If my mum hadn’t been murdered and my dad was about, then things would have been structured from when I was young. My other brothers – one is a solicitor, another is an architect, and one’s a plumber – have nothing to do with crime, you understand? They had mum and dad. They went to private school.’

What makes young people turn to crime? ‘The desire for money,’ he says without hesitation. ‘The system is set up in a way that you don’t feel like anything unless you’ve got money. You’ve got to have designer clothes, a car, a nice girl, people to love, in certain circles you’ll be led believe that you need money to do all that. I no longer believe that. People can love and respect you for who you are, not because they’re scared.’

‘That guy who shot two cops’ has decided to be remembered for something more constructive. Without a shred of self-pity, and with his critical faculties sharp, Leroy Smith has come to tell his story. Out of the Box is at times shocking, at times disarming, and shot through with unresolved tension, even contradiction from start to finish. That said, for anyone concerned with the lived experience of prisoners his disturbing story is not to be overlooked.

Out of the Box is available on Kindle and Paperback