So why all the panic?

So why all the panic?

Contrary to the impression given by much press and media reporting – that the number of employment tribunal claims is spiralling upwards due to a wave of ‘vexatious’ or ‘speculative’ claims – the number of claims actually fell in 2010/11, and appears to be falling further in 2011/12.  Moreover, the headline figure of 236,000 claims in 2009/10 – the figure most commonly cited by ministers as well as journalists – gives a highly misleading impression of the actual workload of the ET system.

The headline figure includes both the number of claims made by individual workers (‘single claims’), and the total number of claimants covered by ‘multiple claims’, in which two or more workers claim against the same employer on the same or very similar grounds. Such multiple claim cases can and often do involve hundreds or even thousands of workers, each one counted as a ‘multiple claim’ in the headline figure, but the ET system may need to determine only one ‘lead’ case.

Indeed, as the following chart shows, the number of multiple claim cases has not varied greatly in recent years, and in 2010/11 was at its lowest level since 2005/06.  The number of single claims was significantly higher in 2008/09 and 2009/10, but as the Government itself has noted (usually in a paragraph buried deep inside a regulatory impact assessment), that is largely if not entirely due to that little hiccup the UK economy had in 2008 and 2009.  In 2010/11, the combined number of single claims and multiple claim cases fell by 15% and, at 66,500, was lower than in each of the two preceding years and only marginally higher than in each of the two years before that. 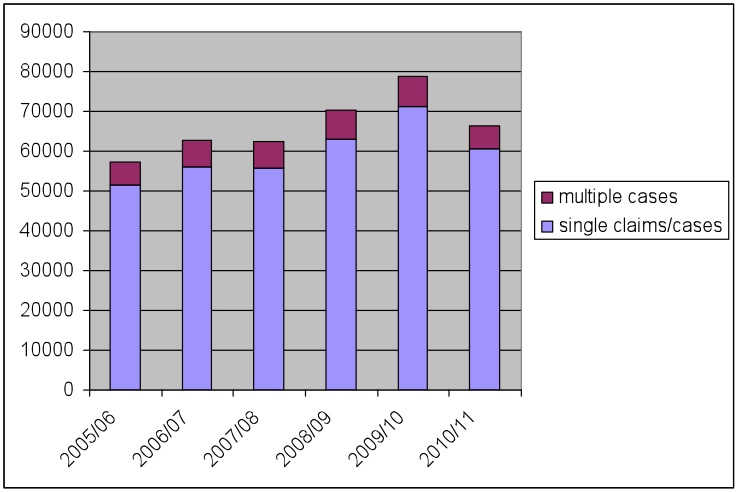 Furthermore, it is difficult to envisage how the ‘spiralling’ number of ‘vexatious’ and ‘speculative’ claims of which the employer bodies complain so loudly could be made as multiple claims, as those making ‘baseless’ claims for purely financial motives presumably act alone.  In other words, one would expect such claims to be single claims. And, as the following chart shows, the number of single claims is not only falling from a peak during the recession, but is lower than it was a decade ago.  So, why Corporal Jones-style panic? 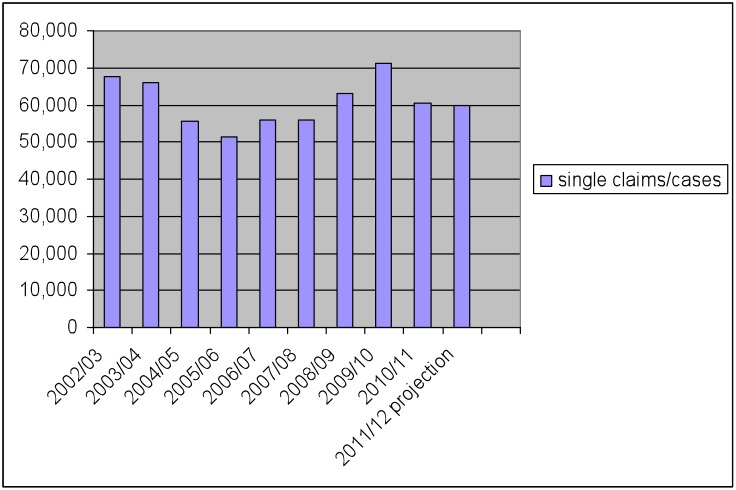 One response to “So why all the panic?”

Reporting of fatal domestic violence 'seriously…
Victims of discrimination denied justice as a result…
'A uniquely reprehensible bill'
Harvey Proctor: 'I speak for the those whose voices…
Equalities watchdog urged to investigate pandemic's…