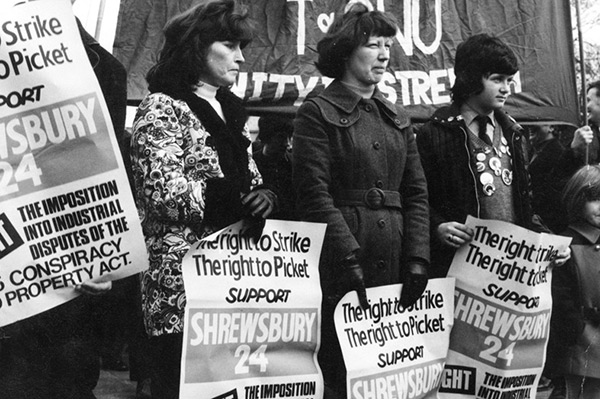 The convictions of a group if trade union activists including the actor Ricky Tomlinson claiming to have been wrongly jailed following an industrial dispute in the 1970s were overturned yesterday after a 48-year campaign to clear their names. The Court of Appeal exonerated members of the Shrewsbury 24 as a result of what their lawyers called ‘wholesale and deliberate destruction’ of evidence.

The leader of the Labour Party Keir Starmer welcomed yesterday’s ruling as ‘a huge victory’. You can read more about the campaign on the Justice Gap here including an interview with Ricky Tomlinson as part of the Justice Gap podcast.

Fifty years ago 24 workers were charged and some imprisoned for standing up for their rights.

My thoughts are with the six men who died since the campaign started.

As reported on the Justice Gap, the Criminal Cases Review Commission (CCRC) rejected the application on behalf of the men known as the ‘Shrewsbury 24’ but was forced to change its mind as a result of being challenged through the courts. It referred eight cases in March 2020. The referral was based on evidence discovered in the National Archives by the campaign’s researcher, Eileen Turnbull.

The Appeal judges overturned the convictions as a result of concerns over a failure in disclosure following a two-day hearing last moth. The men’s lawyers cited new evidence including a note dated 17 September 1973 revealing original statements had been destroyed. It was argued that neither the note nor the fact that statements had been destroyed, was disclosed to the defence at the trial. It was separately argued that a screening of a Granada Television documentary (The Red Under the Bed) which was  highly critical of trade union as the trial drew to an end was prejudicial.

‘If the destruction of the handwritten statements had been revealed to the appellants at the time of the trial, this issue could have been comprehensively investigated with the witnesses when they gave evidence, and the judge would have been able to give appropriate directions,’ the appeal judges said. ‘We have no doubt that if that had happened, the trial process would have ensured fairness to the accused. Self-evidently, that is not what occurred.’

Instead, the Court of Appeal were ‘confronted with a situation in which an unknown number of the first written accounts by eyewitnesses have been destroyed in a case in which the allegations essentially turned on the accuracy and credibility of their testimony’. The appeal judges went on to say that it was ‘correct to infer’ that the descriptions by the witnesses would in many instances have ‘changed and developed as they were shown the photographs and as the police gained greater understanding of what those responsible for the investigation sought to prove’. Such ‘could have been critical’ for the jury.

Terry Renshaw, speaking on behalf of the pickets, said: ‘We never thought that we would see this day, when this miscarriage of justice was overturned. The Court of Appeal has acknowledged that we did not receive a fair trial. The police and the prosecuting authorities used every trick in the book to secure guilty verdicts even if it meant trampling over our rights and manipulating the evidence.’ He paid tribute to Eileen Turnbull for ‘working tirelessly to obtain the crucial evidence that brought about our victory’.

The Public Interest Law Centre represented two of the Shrewsbury 24 Ricky Tomlinson and Arthur Murray. ‘It is important to remember that following their convictions in 1973 they were blacklisted by the building industry,’ commented PILC solicitor Paul Heron. ‘Many of the men could not find work and as a result suffered more punishment. Whilst we understand that the Court was unwilling to consider the wider issues regarding the involvement of the secret state – we are calling for a public inquiry into blacklisting in the industry the role of the building industry bosses and the secret state.’

Bindmans LLP and Rhona Friedman of Commons Law acted for the other members of the Shrewsbury 24. Jamie Potter, head of public law and human rights at Bindmans, said that pickets ‘have had to fight every step of the way to achieve justice more than forty seven years after the police destroyed witness statements. ‘Both the CCRC in their original decision and the CPS have sought to argue that such destruction had an innocent explanation,’ he said. ‘However, the Court of Appeal could “see no basis” for this position.’

‘It is important to note that the statements were destroyed rather than lost,’ PILC lawyers said. ‘We submitted that the firm implication is that they were intentionally destroyed and destroyed in the knowledge that they had been amended “having been destroyed after a fresh statement had been obtained”. A decision therefore was taken to actively dispose of them in such a way that they could not be recovered.’

‘We say this was wholesale and deliberate destruction of evidence that was done to assist the state prosecution,’ the lawyers continued; adding that the surviving statements showed that witness evidence was ‘radically altered’ to ‘favour the prosecution case’.

The ‘Red Under the Bed’ documentary was broadcast on the day that the prosecution closed its case and featured footage of Ricky Tomlinson and fellow picket Des Warren in its opening minutes. According to Public Interest Lawyers, the programme’s narrative ‘concretely but wrongly linked our clients with disruption and violence’. The Court of Appeal heard that the programme was made with the support of a branch of the Foreign and Commonwealth Office called Industrial Research Department ands funded by the security services.

Ricky Tomlinson said it was ‘a sorry day for British justice’. ‘The reality is we should never have been standing in the dock,’ he said. ‘We were brought to trial at the apparent behest of the building industry bosses, the Conservative government, and ably supported by the secret state. This was a political trial not just of me, and the Shrewsbury pickets – but was a trial of the trade union movement.’

‘We have stood firm, and we have been vindicated,’ said Arthur Murray. However, serious questions need to be asked about the role of the building industry bosses in our convictions and the highest office of government who all had a hand in our trial and conviction. Make no mistake our convictions were a political witch-hunt.’

Six more members of the Shrewsbury 24 to have 1970s…
Episode 6: 'It was a political trial - start to finish'
'Things changed forever': posthumous justice for another…
'Prejudical' TV programme renders Shrewsbury 24 convictions…
'Not our finest hour': CCRC finally refers 'Shrewsbury 24'