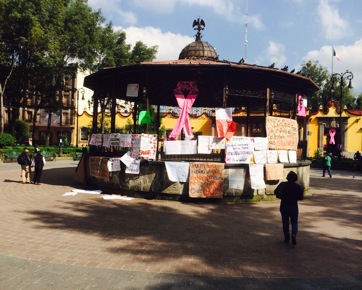 Coyoacan: messages to the people, about the 43 students

Mexico, a country widely regarded as inherently corrupt and poverty stricken, could become the world leader in the assault on corruption itself. The Godess Nike, El Ángel, stands tall in Paeso de la Reforma, Mexico City. Representing victory, she faces downtown, holding out a golden wreath and carrying a broken chain symbolising freedom. At her feet, are four bronze statues symbolising war, law, justice and peace. 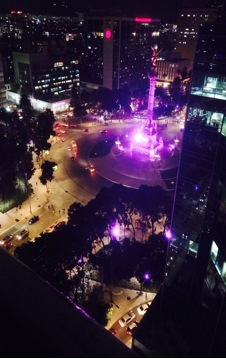 Nike is the Mexican angel of independence, a war already fought and won, yet Nike also stood by the side of Zeus in the war against Typhon, the largest and most fearsome of creatures: whose human upper-half reached as far as the stars and whose hands spread to the points of the compass. His lower-half was made of gigantic viper coils that stretched out constantly, attacking enemies, and fire flashed from his eyes, striking fear into even the great Olympians.

In Mexico, as in ancient Greece, Nike stands side-by-side with those who face the world’s most dangerous beast; this time incarnate as the hyper-violent and all reaching drug cartels. Of course, there is no God, no Zeus, to hurl one hundred lightning bolts and defeat them.

The backdrop to this inevitable war, is a country where half the population are ‘young’, 60% of the population live in poverty, and nearly all crime (93%) goes unreported, let alone unrecorded. According to the an Inspector I spoke to, some 60,000 people are murdered or ‘disappeared’ a year.

Despite this, the economy continues to grow: Mexico is the third biggest car manufacturer in the world. Also, there isn’t a real drug use problem, not in the UK sense.

However, drug trafficking, kidnapping and extortion, organised crime and murder are fuelled by the inability of the US to control its own problems with drug consumption. Mexico has become the unwilling staging post to fuel their demand and, as a result, some towns, entire regions even, exist almost completely under cartel control.

Nowhere is this better illustrated than Iguala, in the region of Guerrero.

Forty three students from Ayotzinapa ‘disappeared’ in Iguala, a series of mass graves have been uncovered – 36 members of the local police force have admitted involvement in the murders and one state governer has resigned.

The night I arrived, thousands of ordinary people, mainly the younger 50% of the population, took to the steps at the base of El Ángel herself, to show their anger, disgust and sadness at what happened in Iguala. The pain is visible everywhere.

Coyoacan: messages about the 43 students

Thankfully, some are already taking a stand. The Policía Federal are fighting a war already. Not just against the cartels – where the difference between other policing styles is underlined by their need for belt-fed machine guns, 50 calibre sniper rifles and Blackhawk helicopters as standard equipment – but against corruption in the police itself.

The first step was the formation of the Assuntos Internos (Internal Affairs) department in 2009. There had never been anything like it and now it attracts recruits of many walks, including some with significant academic credentials. They all share a common passion for change. They are putting Mexican citizens at the heart of their entire policing strategy and, better still, this attitude is spreading, like a positive virus, infecting all of the divisions of the Federales. 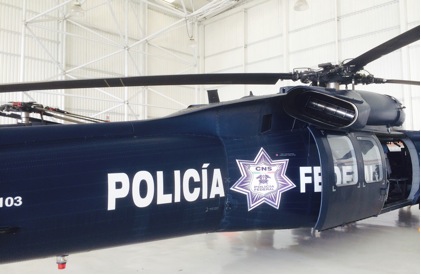 Blackhawk helicopter of the Policia Federal

The department, which now oversees the investigation of public complaints, is now engaged in a police reform programme looking at the structure of the police as a national body. They want to step away from having several thousand municipal police forces – inherently more corruptible by nature – and move to a regional/national model. The barrier they face presently is the Mexican Constitution itself, which gives every community the right to its own police presence. This is not however insurmountable and they are employing help to think around the problems.

They have invested heavily in intelligence led policing and the technology that has resulted, like the Platform Mexico system, is faultless. Their next moves are work on developing whistleblower protections, risk based analytics and creating early warning systems – combining this with covert and overt deployments – so that they can move into corrupted areas more quickly than ever. A new sub department, under the restructing of Internal Affairs itself, is a specific anticorruption command and may be set to be led by a former Deputy Director of Public Prosecutions, who specialised in public corruption cases in the country.

They are also working closely with UNAM, the well respected Mexico City University, to capitalise on – and generate – new types of research in criminology and psychology. They are actively engaging the generation that will take over the reins – and, in doing so, building what they need most: trust.

These are huge leaps and, very shortly, they will be at the forefront of anti-corruption policing worldwide.

In the meantime, the Forces divisions of the Federales have moved into Iguala, to outright replace the defunct police force, and they are on standby, with the resource, to do so elsewhere.

The hunger for change and improvement is not confined to the police but is strong across all sectors of Mexican public service. You can see this in their commitment to working towards better human rights and rehabilitation in the prison system; the better use of technology and intelligence analysis in the security services – working with not only each other but with those from the international arena. They take a particular interest in world events and what they can learn from them, even down to finer problems, such as crime figures.

If the state and the public – half of it being the future of Mexico itself – can all channel their passion together and sustain it, then El Ángel may stand for a different victory in the years that lay ahead: victory over the cartels, freedom from the US drugs market, freedom from the South American supply chain and freedom from the societal corruption that this breeds.

Nike is certainly looking out to Mexico, with her offer of victory over Typhon, so, before the eyes of the world, Mexicans could well become the children of Titans.

Oval four: final conviction overturned
'Taking down statues does not cause us to forget history'
COVID-19 first, crimes against humanity second
UNJUST PODCAST: The story of Winston Trew and the…
Police warned about holding ‘excessive amounts’ of…