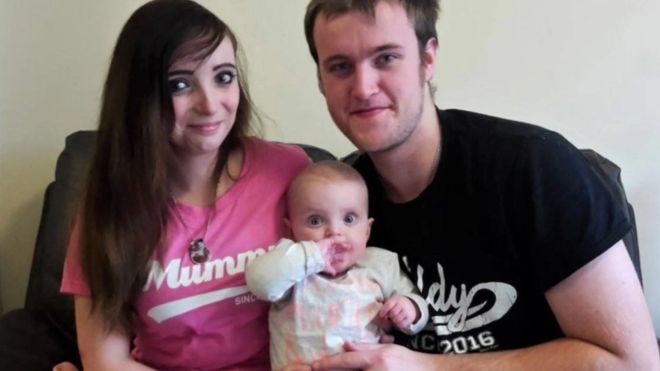 When their five-month-old daughter Effie collapsed in the early hours of August 2016, parents Craig Stillwell and Carla Andrews rushed her to Stoke Mandeville Hospital. They could never have predicted what would happen next.

Things escalated fast. With doctors unable to deduce a natural cause for Effie’s seizure, police and social workers were called. Accused of shaking his baby, it was a matter of hours before Stillwell was arrested. Once she was released from hospital, Effie was placed in foster care and her parents were only allowed to see her in a contact centre for a few hours a week.

Tests for the rare genetic condition Ehlers-Danlos Syndrome (EDS) eventually revealed that Effie suffered from Type IV, which can cause easy bruising and spontaneous bleeds on the brain. Nine months later, as we reported previously, Stillwell has been acquitted and Effie is back home.

Stillwell remains upset with the way he was treated: ‘I think the hospital should have done things a lot better than they did,’ he says. With his severely ill child in a hospital bed, Stillwell was understandably distressed when the finger was pointed at him. In his evidence in court, the policeman claimed that he made the initial arrest because he was worried that the father, who appeared agitated, would try to go to Effie’s bedside and harm his own child. ‘They should give people more of a chance to prove their innocence,’ argues Andrews, ‘rather than straight away branding them as guilty.’

Proponents of so-called Shaken Baby Syndrome (SBS) argue that a ‘triad’ of symptoms – brain swelling, bleeding on the brain, and bleeding in the retina – indicate an inflicted injury and therefore child abuse. When a hospital is suspicious, they act quickly. In the wake of social care disasters like Baby P, staff feel duty-bound to be vigilant. But if their assessment is wrong, the consequences – for the children as much as the parents – are disastrous.

As Effie lay in hospital, neither parent was allowed onto the ward for a week. ‘A nurse takes the view that they’re dealing with child abusers,’ comments William Bache, a senior lawyer at GT Stewart who represented Carla Andrews. ‘They’re judge and jury and executioner all in one. They immediately start to treat the parents like lepers.’

‘Depressingly conventional’
‘We had to seek legal advice straight away,’ recalls Stillwell. Still reeling from Effie’s ill-health and the charges they were facing, the couple were unable to get specialist legal support until Andrews came across Parents Accused, a website set up by Rachel Carter to help those accused of causing non-accidental injuries.

Accused parents are often left with lawyers with little idea of SBS, according to Carter, a partner at Wollen Michelmore who represented Stillwell in court. ‘It’s really common that parents will nip up the road to the nearest solicitor that undertakes “family law”,’ she explains. When Effie’s case came across her desk, she knew who to contact and what to look for.

‘The allegations were depressingly conventional,’ confirms William Bache, who was contacted by Carla Andrews a couple of months after proceedings began, in around October. Bache is best known for representing Angela Cannings, who in 2002 was wrongfully convicted of smothering her two baby sons. Controversial paediatrician Sir Roy Meadow gave evidence against her, but it was later ruled that the children had probably died due to a genetic disorder.

A possible natural explanation for the bleed on Effie’s brain struck both Bache and Carter almost immediately. ‘I’m not a doctor,’ explains Carter, ‘but I’ve dealt with a lot of EDS and genetic issues. With the picture of Effie, alarm bells rang that something wasn’t right.’ Their hunch turned out to be correct, and Effie’s subsequent EDS Type IV diagnosis put paid to the local authority’s case.

In April, after the decisive EDS tests, the local authority withdrew their application and proceedings at Milton Keynes Family Court ended. Judge Venables’ judgment commented on the ‘unimaginable horror’ the couple had had to endure. Stillwell remembers hearing the verdict. ‘It just felt like a mountain of worry had gone,’ he says.

Dr Waney Squier: According to an investigation by the BBC’s Panorama aired, there were more than 100 cases of babies with SBS symptoms in 2015. Pic: BBC

A shaky hypothesis
As William Bache maintained in a letter published in The Times earlier this month, this isn’t an isolated example. It’s one of many. ‘The causes of serious injury or sudden death in young babies remain insufficiently understood,’ he wrote. ‘Yet outdated and ill-researched medical opinion too readily concludes that they arise from abuse.’

The science behind SBS has repeatedly been called into question. In February, a major review by an independent Swedish scientific agency found ‘insufficient scientific evidence’ to support the triad theory. When Bache looks at many of these cases, he is reminded of his experience with other wrongful diagnoses of child abuse like baby-smothering: ‘Nobody had ever dared challenge it and it struck me that this was complete nonsense.’

‘If you examine the scientific origins of Shaken Baby Syndrome it’s similar rubbish,’ Bache says. ‘It’s never been tested and the more research that’s done, the less and less tenable the theory becomes. What I find so utterly frustrating and wrong is that courts make decisions on the basis of a hypothesis. A hypothesis by definition could easily be wrong.’

In court, Bache tends to face obstacles when he tries to introduce expert witnesses who might interpret the evidence differently (as reported in January). ‘I find quite a lot of hostility towards having more than one expert per discipline,’ he comments. Bache argues that financial restrictions make courts reluctant to allow more experts, which means that competing views are less likely to be aired.

The EDS test in Effie’s case gave a conclusive result, but often the diagnosis is less clear-cut. Where the symptoms are equivocal and can be explained in different ways, he suggests, ‘you need experts to offer differing standpoints’. ‘But it’s hard work trying to get the judge to agree, and of course you’ve got to get the funding organised as well. And that’s if you can find an expert, because after the way Dr Squier got treated, they’ve all gone back into their shells.’ In March 2016 Dr Waney Squier, one of the few experts prepared to question the existence of shaken baby syndrome in court, was banned from practising after the General Medical Council determined that she had lied and misled courts. Quier has since been reinstated. (You can read The silencing of Waney Squier here.)

Carter worries that ‘the very best, most experienced and most objective experts are less and less inclined to act in these types of cases. If the courts perceive they have got it wrong, their career is on the line’.

In this case, Bache says that Judge Venables wanted ‘a really thorough exploration of the scientific background’. But there’s no real consistency amongst the judiciary, he argues. ‘I don’t believe that it should be left to the individual discretions of judges because they’re very variable. I think that if parents have been accused of abuse, there should be written into the law a right for those parents to have experts of their own choosing. That would go a long way towards helping.’

‘Never give up’
For Craig Stillwell and Carla Andrews, the court’s decision wasn’t the end of the story. Despite the hospital’s subsequent apology, social workers want to investigate further. Stillwell says that the local authority has issued the couple with a Section 47 order, which gives them the right to assess the family on the basis that there is ‘reasonable cause’ to suspect that the child ‘is suffering, or is likely to suffer, significant harm.’

Stillwell feels like he’s being watched. ‘The social workers really haven’t left us alone,’ he says. ‘They came round twice last week unannounced. They want to do an assessment with us, which we’re happy to do, but we’re not happy with what it involves. They’re questioning our parenting, which wasn’t an issue in court. All we want to do is get on with our lives and look after Effie.’

‘It should not be forgotten that cases like this have the most dire consequences for families,’ says Rachel Carter. ‘There needs to be an awareness that there are conditions that mimic this kind of abuse. Doctors are often told: “If you hear hooves, think horses – not zebras.” That’s unhelpful for cases like this. Whilst we can’t expect hospitals to carry out every test under the sun, there should be a greater willingness to look at alternative explanations.’

Had awareness of other explanations like EDS Type IV been greater, Stillwell and Andrews may have been spared this ordeal. Instead, Stillwell now finds himself offering guidance to other parents who are in the same situation: ‘The only advice I can give is to never give up.’

‘When Effie was going through this, we bought a Chinese one night and they gave us a fortune cookie. And in my fortune cookie it said: “Your kindness will surely be repaid.” I’ve still got that in my wallet to this day. If you know you’re innocent, just keep fighting and it will be repaid when your child comes home.’