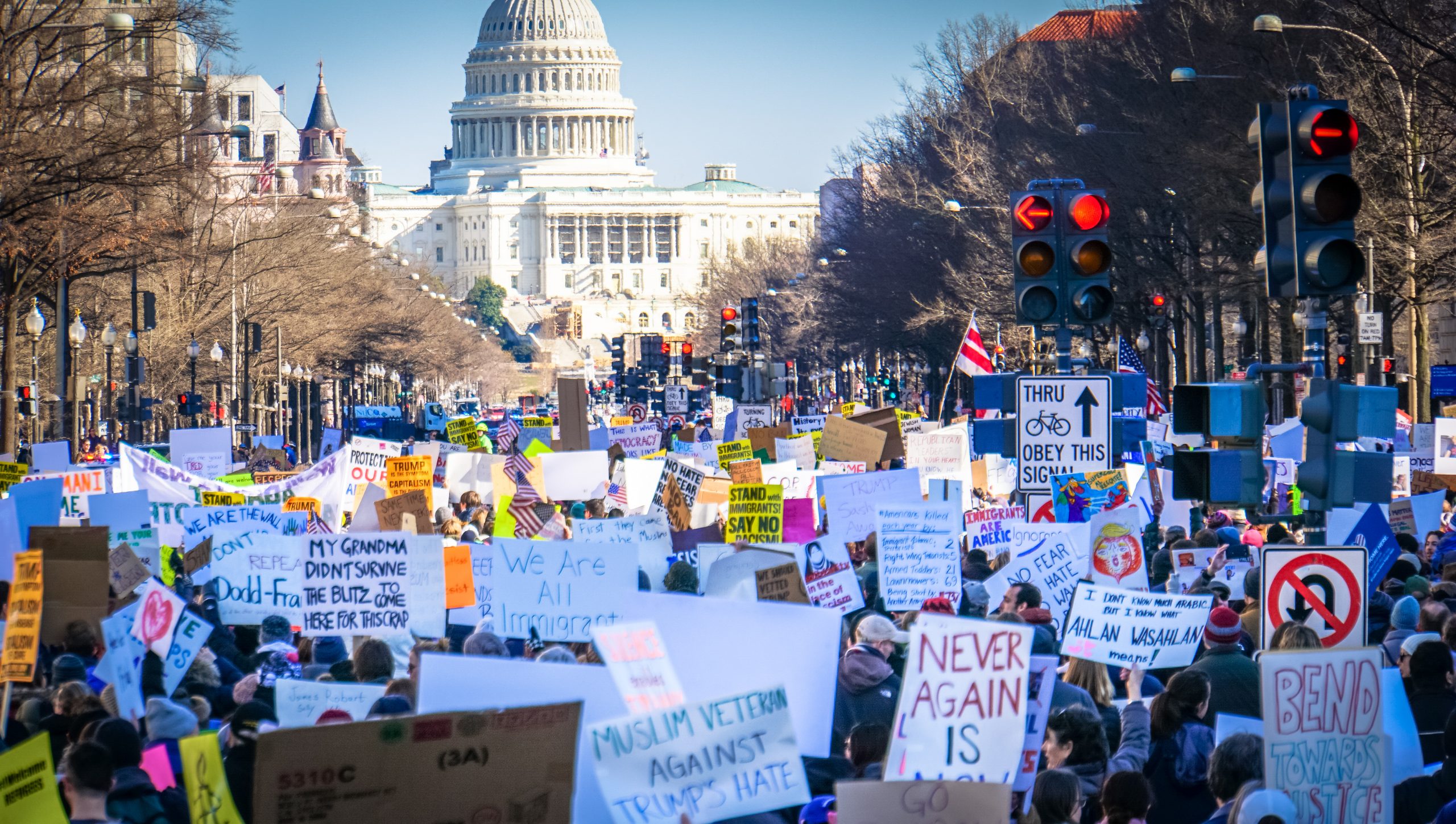 On Holocaust Memorial day 2017, the president of the US signed an executive order banning Syrian refugees indefinitely, suspending all refugee arrivals for four months and blocking entry for nationals of seven Muslim majority countries for three months.

The move, which gives de facto effect to Trump’s campaign promise of ‘a total and complete shutdown of Muslims entering the United States’, has sparked international outrage. Thousands of people mobilised to fill airports in the US in a demonstration of resistance to the ban, while cab drivers called a strike in solidarity and lawyers worked around the clock filing habeas corpus petitions. In the UK, people took to the streets in cities across the country to denounce our Prime Minister’s deplorable failure to condemn the ban or rule out a state visit until it is lifted.

It is right to be outraged at Trump’s Muslim ban. It is vital we continue to respond with outrage to any attempt to normalise it. But in the UK we must also use this political moment to reject the xenophobic moral panic in our own public discourse and to direct outrage at the violence inflicted by our own immigration policies.

Charter flights – planes privately hired by the Home Office to carry out forcible mass deportations – are one of the most invisible incarnations of this violence. Departing from undisclosed locations, the only people on board are those being deported and the private, unaccountable security enforcement personnel ‘escorting’ them. Charter flights are designed to escape inconvenient public scrutiny (such as commercial passengers witnessing use of excessive force); and activists recently organised two weeks of action protesting their use.

In light of the resistance to ‘Muslim Ban’, it is worth drawing parallels between the legal fight against Trump’s executive order and potential challenges to the UK’s own mass deportation policy of charter flights (see report by Corporate Watch).

Due process
In the US, the legal challenge Darweesh v Trump, a class action brought with speed by civil rights groups, argues that Trump’s order violates the due process and equal protection clauses of the American constitution. Twenty-four hours after the ban took effect a Federal Judge had granted a stay with national effect on these grounds, finding ‘a strong likelihood of success in establishing that the detention and/or removal of the petitioners and others similarly situated would violate their rights to due process and equal protection’.

To refuse entry on the basis of religious or national origin, instead of examining the merits of each claim individually, is by its nature a prima facie violation of due process. Darweesh v Trump also highlights issues such as lack of access to counsel, translators or information in detention, which amount to substantive due process violations.

But don’t charter flights preclude due process in similar ways? Scheduled in advance on fixed routines to selected countries, rather than following ‘demand’ arising from individual cases duly processed, by their nature charter flights make ‘seat-filling’ by national origin the imperative. This is illustrated by the practice, deemed ‘inhumane’ by the prisons inspector, of bringing ‘reserves’ of the same nationality to fill seats on charter flights if illness or appeal prevents someone’s removal. Seat-filling is also evidenced by Immigration Control and Enforcement targeting ‘Charter nationals’: on their own admission, as revealed by freedom of information requests; and, according to reports, of intensified raids on homes and workplaces in the run up to a scheduled Charter Flight. All this suggests a subordination of due process to deportation by national origin.

Moreover, the vanishingly short period between notice and removal in most cases, combined with the absence of legal aid following the 2012 LASPO cuts, means challenging deportation decisions is impossible for most. The Home Office justifies this through its ‘deport first, appeal later’ policy recently rolled out for all immigration cases: claiming that having no access to legal challenge before deportation is no violation of effective remedy since out-of-country appeals are possible in theory (despite their near impossibility in practice). As such, there are severe obstacles to substantive due process and effective remedy associated with charter flights. The fact that the High Court recently found thousands of asylum seekers over the course of a decade to have been treated unfairly under the detained fast track system justifies such concerns with procedure. A case challenging ‘deport now, appeal later’ will be considered by the Supreme Court this month.

Darweesh v Trump also raises the particular danger of non-refoulement violations – unlawfully returning people to a context where they are likely to face persecution – when due process of law is compromised. Given the irreversible nature of harm inflicted when a person is returned to a place where they face persecution, European Court of Human Rights case law has emphasised suspension to deportation as a necessary component of the Article 13 right to effective remedy (Jabari v Turkey ¶50; Čonka v. Belgium ¶ 82-85). Yet in the UK, ‘deport now, appeal later’ means this protection gets denied even to people making asylum and human rights claims. This, combined with the questionable procedural safeguards attendant on a seat-filling imperative, makes charter flights particularly conducive to violations of both the right to effective remedy and the right to non-refoulement.

On Tuesday night last week a charter flight deported 100 people to Nigeria and Ghana against their will. One of the passengers due to be on that flight was Oyekunle, a gay man from Nigeria, where LGBTQ people are persecuted. He had never had a Home Office interview for his asylum claim because the correspondence was sent to the wrong address. Thankfully Oyekunle was taken off the flight at the last minute when a barrister filed an injunction on these grounds. This intervention was the result of activists raising awareness of his case, rather than due process. Another man set to be on Tuesday’s charter flight, who had spoken about fearing for his life in the event of removal to Nigeria due to his sexuality, and not having access to a lawyer, is believed to have been on board.

Collective expulsion
One of the biggest legal challenges to Trump’s ban, Sarsour v Trump, was brought by the Council on American-Islamic relations, with Palestinian-American activist Linda Sarsour as lead plaintiff. The complaint highlights that a ‘central purpose of the Muslim Exclusion Order [is] to initiate the mass expulsion of… Muslims lawfully residing in the United States… based solely on their religious beliefs’. Indeed, it has been pointed out that the imprecise wording of the order, banning ’immigrant and non-immigrant entry’ extends the ban to legal permanent residents and others with lawful immigration rights, which makes it impossible to view as anything but the ‘Muslim Exclusion Order’ Sarsour v Trump has termed it.

In other words, Trump’s ban – discriminatory in both intent and effect and in clear violation of international law – is nothing short of a calculated attack on the ethnic and religious composition of the nation.

The ECHR contains an express prohibition of ‘the collective expulsion of [so called] aliens’ (Article 4, Protocol 4). Although it forms part of a Protocol the UK has not yet ratified, ECtHR case law is again instructive on this point. The judgement in Čonka v. Belgium, sets out five factors that indicated to the Court that the expulsion authorities were carrying out was collective within the Convention meaning:

‘… firstly, prior to the applicants’ deportation, the political authorities concerned had announced that there would be operations of that kind and given instructions to the relevant authority for their implementation (see paragraphs 30 and 31 above); secondly, all the aliens concerned had been required to attend the police station at the same time; thirdly, the orders served on them requiring them to leave the territory and for their arrest were couched in identical terms; fourthly, it was very difficult for the aliens to contact a lawyer; lastly, the asylum procedure had not been completed.’

Corporate Watch’s report details how in relation to charter flights from the UK, authorities appear to undertake similar actions on each of these five points. Firstly, UK politicians have made statements announcing charter flights; secondly ‘charter nationals’ are detained for removal around the same time and same place, such as reporting centres; thirdly, removal directions appear fairly identical; fourthly there are substantive obstacles to legal representation – lack of legal aid, lack of information, short notice, detention, and the ‘deport now, appeal later’ policy; lastly, the imperative to fill seats on charter flights can take precedence over duly processing asylum claims, as Oyekunle’s case this week illustrates.

Like aforementioned issues of due process and effective remedy, this challenge to the UK’s charter flights – that they amount to collective expulsion – would argue violation of Article 6 of the Human Rights Act: which prohibits public authorities from acting in way that is incompatible with Convention rights except as a result of primary legislation or where they ‘could not have acted differently’. The ‘special arrangements’ attendant on charter flights do not arise from primary legislation; while – as the plaintiffs will argue of the Muslim ban in Sarsour v Trump – it would be difficult for British authorities to claim they could not act differently on charter flights.

Just as Trump’s executive order amounts to a Muslim ban, charter flights amount to collective expulsions of particular nationalities. Due process is, at the very least, treated by authorities as subordinate to other considerations: such as a thinly veiled attempt to control the ethnic makeup of the nation in a manner that is – in reality – absolutely comparable to Trump’s Muslim ban.

Legal challenge alone cannot defeat policies borne of xenophobic moral panic. But the naked intent underlying such policies is sometimes better exposed when legal justifications are thin on the ground. Here, as in the US, this is a strategy that can lend power to what the political moment demands: a collective refusal to confer legitimacy on any form of institutionalised inhumanity.

Our print magazine is Proof. Contributors include Michael Mansfield QC, Bob Woffinden, David Rose, Eric Allison and Ian Cobain.
Buy Proof Magazine
The latest issue (Why legal aid matters) includes Helena Kennedy QC and Martha Spurrier in conversation, David Conn on the legacy of Hillsborough - plus how to build your own law centre.
Maya is a GDL student at City University, London. Follow her on twitter, @MayaThomasDavis

Government has a 'moral duty' to lift the ban on…
Taking away the soapbox
'We need the courts to put an expansive executive…
‘Unimaginably cruel’: campaigners respond to…
'Inhumane': Priti Patel unveils tougher asylum regime