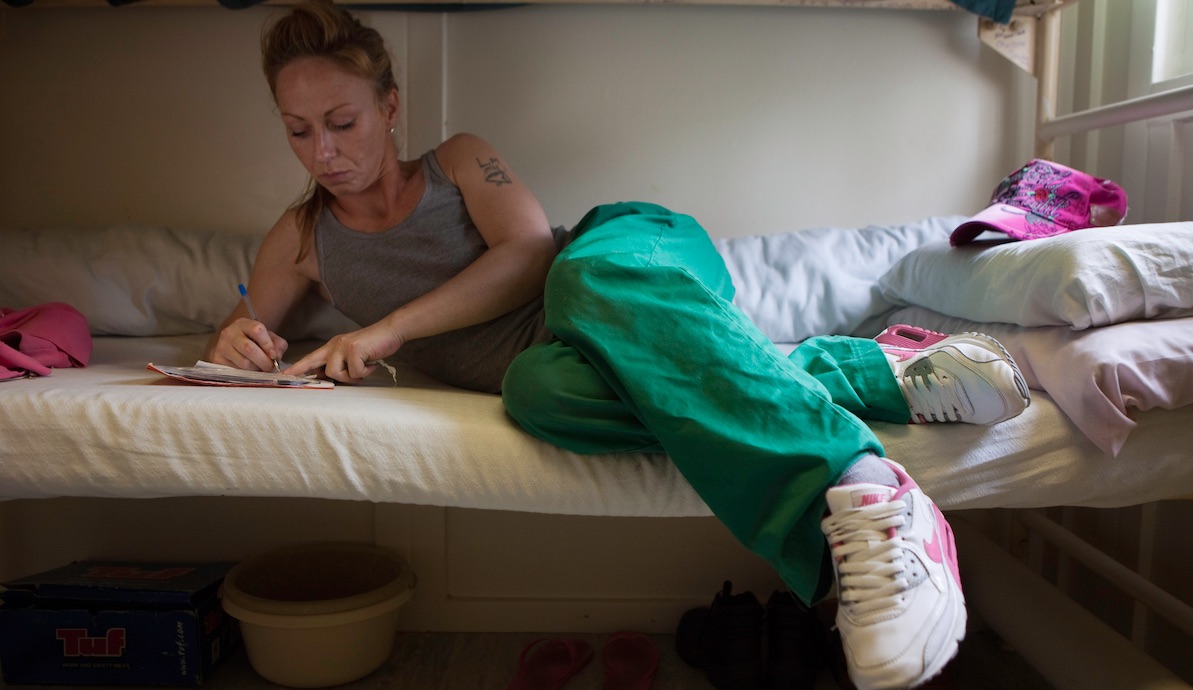 When the Transforming Rehabilitation ‘revolution’ was launched in 2014 the Ministry of Justice (MoJ) stated that it was ‘committed to addressing the factors associated with women’s offending and to taking a different approach where there is a need to differentiate provision for female offenders… . We readily acknowledge that there are often many complex factors associated with women’s offending including domestic violence, sexual abuse, substance misuse and homelessness.’

Fast-forward two years and there is little to justify this early optimism. New Offender Management figures from the MoJ reveal that more women than ever before are now being recalled to prison while on supervision in the community. Between the quarters of October-December 2014 (n= 200) and April-June 2016 (n= 363) the total number of women recalled from licence increased by 81.5%.

These figures are a direct result of the MoJ decision to extend statutory supervision to short sentence prisoners, with the option of recall to custody for those who do not engage. Prior to the Offender Rehabilitation Act 2014, which came into effect on February 1 2015, no woman serving under 12 months was recalled to prison. In the quarter, April – June 2016, 200 women were recalled, the majority of these women were supervised by the 21 new Community Rehabilitation Companies (CRCs) across England and Wales.

Since women are more likely to serve short prison sentences than men they have been disproportionately affected by these changes. The graph below tracks how the total number of men and women recalled from licence has changed since the reforms were introduced. While less pronounced than the rise for women, there has also been a 18.4% increase in the men’s recall population from 4,348 in October-December 2014 to 5,149 April-June 2016. 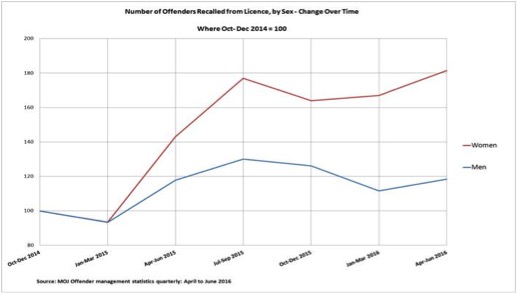 Perhaps the most damning aspect of this story is that it was entirely predictable. During the Transforming Rehabilitation consultation, the Prison Reform Trust (PRT) along with many other organisations raised serious concerns that if the new supervision regime was not introduced with care it would drive up the short sentenced prisoner population.

This is precisely what has happened. Contrary to Section 10 of the Offender Rehabilitation Act 2014, which created the first statutory safeguard for women’s services, recent reports from the Public Accounts Committee and the HM Inspectorate of Probation have raised serious concerns about recall and the negative impact Transforming Rehabilitation is having on women’s services, family life, housing and employment. Protective factors that are all known to reduce re-offending.

In this sense the changes to supervision and recall represent the latest example of ‘net widening’ where ‘administrative changes result in a greater number of individuals being controlled by the criminal justice system’. A measure justified on rehabilitative grounds is now reinforcing the revolving door of prison, breach and recall back into custody with significant cost to the Ministry of Justice as well as local authorities who are already seeking to manage significant reductions in public expenditure.

The Ministry of Justice must act now to reduce the number of women being recalled to prison. As the Justice Secretary notes in the foreword to the recent Prison Reform White Paper, our “prisons are not working”.

Our print magazine is Proof. Contributors include Michael Mansfield QC, Bob Woffinden, David Rose, Eric Allison and Ian Cobain.
Buy Proof Magazine
The latest issue (Why legal aid matters) includes Helena Kennedy QC and Martha Spurrier in conversation, David Conn on the legacy of Hillsborough - plus how to build your own law centre.
Dr Guiney is a senior programme manager at the Prison Reform Trust