The fine line between popular and populist

The fine line between popular and populist 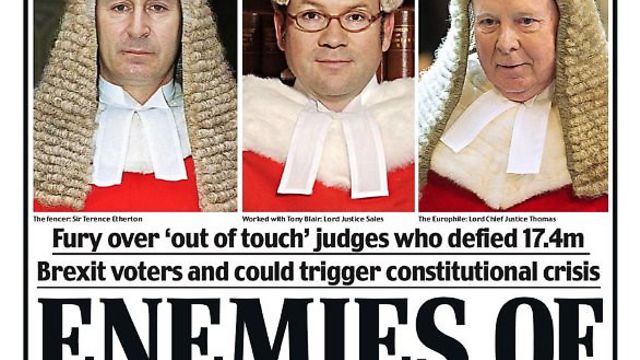 ‘You can’t always get what you want, but if you try sometimes, you might find you get what you need.’  The government might have wanted to listen to the Rolling Stones a few more times before publishing its response yesterday to the Independent Review of Administrative Law’s Faulks Report.

Rather than engaging with the substance of the Report, which upheld the role of the judiciary in a democracy, the government misrepresented its conclusions. Its response cherry-picked the few proposals that limited the authority of the courts before promptly announcing another consultation on judicial review, presumably hoping that it will strike lucky second time around.

Given the judgement reached by the Independent Review and the character of Johnson’s government – which is increasingly unwilling to brook dissent – such a response is hardly a surprise.  While not a celebration of judicial review, the Faulks Report was a firm vindication of the status quo, recommending few substantive changes and endorsing the principle that ‘an effective, independent judicial system is a fundamental prerequisite for effective executive accountability’.

This is not what the government wanted to hear.  Having hand-picked the panel and installed Lord Faulks, a judicial power sceptic, as chair, it was doubtless anticipating an excoriation of the judiciary’s expansionist tendencies, and an assertion that it is solely for the executive and the legislature to decide on ‘moral values [sic] issues’.  Nor was the government alone in this expectation, with many commentators, including myself, expecting (possibly unfairly) the Review to act as an adjunct of the Policy Exchange think tank’s Judicial Power Project, which devotedly defends the right of the government to act free from judicial oversight.

If Downing Street were blessed with an iota of self-awareness, the Review’s conclusions would have made it think again about its fixation on the judiciary, and consider if the executive really should be free to amass ever more unaccountable power. After all, there is at least some part of the government that believes that democratic values are to be celebrated and defended, with Dominic Raab, the Foreign Secretary, bemoaning the fact that ‘democracy is retreat’ across the globe last Wednesday.

Delivering a speech to the US Aspen Security Forum, Raab claimed that the UK needed to ‘be guided by its ‘moral compass’ and that it has an obligation and responsibility to use its ‘clout’ as a ‘force for good in the world’ in trying to stem the rising tide of tyranny.

Admittedly, it may be that the government is simply taking Humpty Dumpty’s approach to the English language, who told Alice in Through the Looking-Glass that a word ‘means just what I choose it to mean- neither more nor less’. After all, Raab was also content to argue that the UK ‘can and should alleviate the worst suffering in the world’ while his Foreign Office near-simultaneously slashed the aid given to the people of Yemen, one of the most devastated populations in the world, and he must also be confident that increasing the UK’s nuclear arsenal will somehow enhance the ‘conditions of peace and stability that underpin’ the current world order.

Raab was right, however, to acknowledge Britain’s global responsibility.  As one of the world’s leading democracies, it is for British governments to illuminate liberal values, not to provide would-be autocrats with manuals on how to turn the lights off on them.  Yet this latter course of action is the one the prime minister and his Cabinet are pursuing.  The debate and vote in the House of Commons on the Police, Crime, Sentencing, and Courts Bill earlier this week was one of the most shamefully illiberal moments in Parliament’s history.

The bill empties the right to protest – a right fundamental to any real democracy – of its substance, essentially granting the Home Secretary and the police the unilateral power to decide if a protest can continue- or if it can go ahead at all.

Even Theresa May, who as Home Secretary was not averse to a draconian policy, warned the government about walking a ‘fine line between being popular and being populist’.

In its report, the review was at pains to emphasise that it is not the role of Parliament to be ‘supine and incapable or unwilling to challenge or enact legislation, particularly of a constitutional character’. Perhaps parliamentarians would have benefited from an advance copy of the Report, as it is difficult to reconcile this dignified view of Parliament with Tuesday’s reality. Rather than challenge the government on its proposals, Conservative MPs lined up to vote for it, with the bill passing the second reading by 96 votes.

If Johnson is able to proceed with legislation that hacks away at a right as integral to a democracy as that of protest, it is difficult to imagine that there is anything this kowtowing House of Commons will not nod through, particularly a bill checking the powers of the courts, which is what the prime minister clearly wants to do.

But before he proceeds down such a path, Johnson needs something to give any such proposals a veneer of legitimacy, and so we have this second consultation.  Judging from the Lord Chancellor’s foreword, Downing Street’s focus is on ousting the judiciary from reviewing certain matters, erecting a fence around some executive decisions and adorning it with a large sign saying ‘JUDGES KEEP OUT’.

This was not something the Faulks Report endorsed, finding that it would be a ‘significant disadvantage’ if Parliament and ‘in some circumstances possibly the executive’ was ‘easily able to oust judicial review’.  While they were willing to accept that some changes to the operation of judicial review may be reasonable, advocating reform of the Cart judicial review system that operates in the immigration tribunals, the Report drew the line well before any wholesale reform.

For anyone still in any doubt as to whether judges are ‘enemies of the people’, the conclusions of the review have made it abundantly clear that they are not, but instead a vital cog in Britain’s democracy. Inevitably, Johnson’s government refuses to accept the reality of this.  Rather than take the opportunity to enact some moderate reforms of judicial review and to claim a victory, it has doubled down, claiming that the review ‘identified a growing tendency’ for the courts to assert their authority over the governance of the nation, and asserting its determination to put judges firmly back in their box.

This is something Parliament will be all too willing to assist in. The real question is whether the Supreme Court will simply watch Britain be submerged by tyranny’s rising tide, or if the justices will try and hold it back.