‘Taking down statues does not cause us to forget history’

‘Taking down statues does not cause us to forget history’ 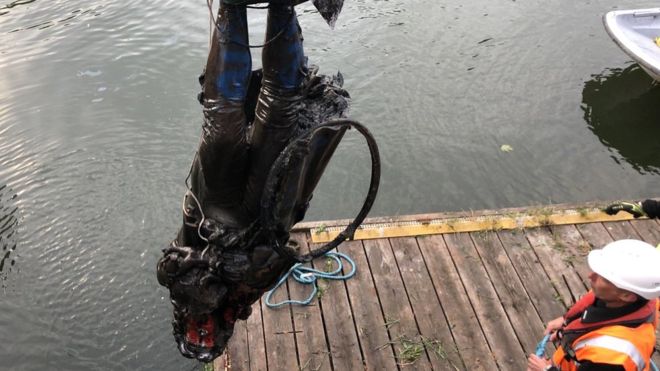 In American jurisprudence, the ‘fruit of the poisoned tree’ is the principle that evidence which has been acquired unlawfully, regardless of how valuable, cannot be used in court. The original sin taints everything that comes from it. This is a helpful metaphor for how to consider Edward Colston. As many have recently learnt, he was a noted philanthropist, whose money has done, and continues to do, much good. All of this good, however, unequivocally comes from the heinous sin of slavery. It is irrevocably tainted.

Attempts to qualify Colston’s legacy, such as through a plaque acknowledging his culpability in the slave trade, came to nought. The democratic means of clarifying history and recognising wrong failed, in no small part due to the intervention of societies like the ‘Merchant Venturers’, who were inexcusably determined to ensure that the people of Bristol were left ignorant of Colston’s history as a slaver. Dragging him from his plinth and dumping him in the river was no more than he-  and his modern-day defenders – deserved.

Statues are not mere decorations, pleasant distractions from the monotony of the high street. Nor are they a record of our history – indeed, as Robert Saunders has noted, they curate it. They demonstrate our values and principles as a society. It is no little thing to fund and commission a statue – who we carve in marble is as revealing as who we do not. Cecil Rhodes looms over Oxford High Street, his presence there dictated by the terms of his bequest. Much like Colston, this bequest – and all the other creditable causes that Rhodes funded and founded – was gained inhumanely, through oppression and brutality. That Rhodes Scholarships are now awarded to black students from Africa does not absolve Rhodes of the pain and suffering that he inflicted upon the African peoples.

Colston’s dunking in Bristol Harbour has reinvigorated calls for other statues to be de-plinthed, as a way of our modern society atoning for the sins of our forefathers. The ‘Rhodes Must Fall’ campaign has resurged, with the netting intended to protect Rhodes from desecration from pigeons now serving to protect him from the even greater ignominy of crashing to Oxford’s High Street.

For these supporting a modern-day Reformation, such destruction is necessary for us to become a more equal and just society. It is no use proclaiming that black lives matter when slavers gaze down on passersby from every plinth. Such advocates of purity should, however, consider whether such actions truly move us towards a more just society, or are a superficial balm for those who are more interested in showing solidarity than in achieving equality.

Few, if any, historical figures have lived a Christ-like life. Even those unequivocally celebrated today, like Gandhi or Martin Luther King Jr., held unacceptable views. Part of the complexity of humanity is that people can do incredible good while also inflicting incredible harm. Debating their legacy may be a worthwhile academic debate, but this debate must be put in context. Societies all around the world are recognising the need for greater equality, with marginalised groups still facing discrimination. Is debating statues where this energy should go?

Focusing on the legacy of statues sucks oxygen away from the present, and funnels it towards the past. Greater justice cannot be achieved for those who struggled under the yoke of slavery, or who were massacred for their beliefs. What can be achieved is greater liberty and equality for their descendants who are living today. This is best achieved when society acts as a unified force.

Few people in Britain condone treating people differently because of the colour of their skin. We can debate whether we live in a racist society, but we do not live in a society of racists. However, if we pursue this persecution of statues, the support for equality will be fractured, creating new cleavages in the movement. People who justifiably want to see Nelson recognised for his victory at Trafalgar, who praise King for his relentless pursuit of racial equality, who admire the fact that Britain abolished slavery during Victoria’s reign will fall on one side, and those who want to see their statues dismantled on the other. By adopting an antagonistic stance, those who are most ardent in their desire for reform push moderates, and those who may be sympathetic to the greater cause, away.

It is no use saying that such wants reflect the inadequacies of our education system, and that people would not want to celebrate such figures if they knew their true histories. There may be a need to ensure that our teaching, for instance, of the British Empire is more nuanced, but this will not extinguish the pride that people have in Great Britain. Such pride is normal. At times, this pride is excessive or unwarranted- the Brexiters’ constant analogising with World War II and the suggestions of creating Empire 2.0 are ahistorical and frustrating- but it does not mean that the British people should be reduced to viewing their past with unalloyed shame.

Rather than commentators discussing whether or not Winston Churchill deserves a statue on Whitehall, the focus could have been on the real harms being done today. The government could have been encouraged to remedy the injustice that is the UK continuing indefinite immigration detention- the only country in Europe to still do so. The time could have been spent discussing how we can redress systemic racism in the police force. The pressure could have been put upon Johnson to implement the ‘Windrush Lessons Learned Review’. All of these proposals could have launched meaningful and real change for those communities that suffer discrimination today.

Obviously, even these proposals will be met with resistance from some quarters. But there is less room for debate and division over issues like the fact that the proportion of BAME children offending for the first time has risen significantly, or that BAME adults make up 25% of the prison population, despite comprising only 14% of society. Reports like the 2017 Lammy Review make clear that there is very real injustice in society, and that steps must be taken to remedy it. Within these projects there is more to unify sensible, moderate people than there is to divide them. For the Black Lives Matter movement, the focus should be on winning the argument on substance, rather than picking fights over symbolism.

The destruction of statues has, for some, a visceral thrill. It gives the satisfaction of seeing something tangible done, a physical strike against injustice. We should be wary, however, of this rush of endorphins distracting – or even detracting – from real change that is needed. The Bristol police were right not to intervene in the desecration of Colston’s statue, and prosecutions- even as the Home Secretary interferes in the legal process to call for them- would be a mistake. But the symbolism of one act should not become the focus of society.