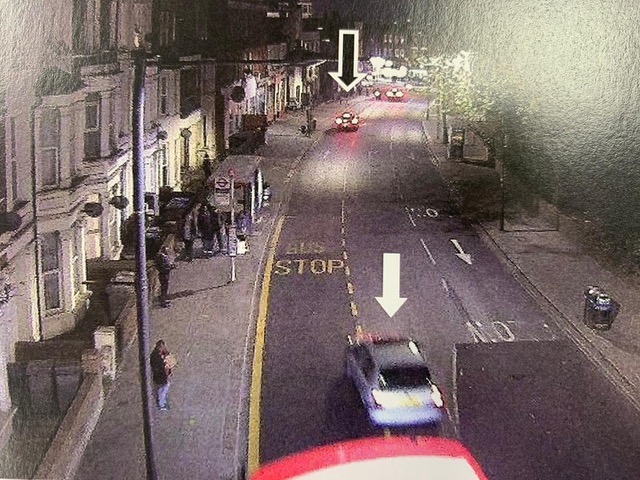 Under ‘joint enterprise’ a person who did not strike the fatal blow or pull the trigger can be convicted of murder. Five years ago the Supreme Court recognised that the controversial law had taken ‘a wrong turn’ but have the courts changed their approach? Fran Robertson and Melanie McFadyean report on a disturbing recent case. The unedited version of this article appears in the Justice Gap’s Proof magazine issue 5.

On the evening of April 23rd,  2019,  Meshach Williams was walking along Harlesden High Street with a friend when a man jumped out of a VW Passat and stabbed him before fleeing in the waiting car, which sped away followed by a second car. It was an horrific and seemingly motiveless attack. Meshach Williams, who was just 21, died later that night.

In January 2020, the man accused of stabbing Williams, 23 year old Emmanuel Kamara, was cleared by an Old Bailey jury.  But two others, not accused of the stabbing itself, were found guilty of his murder. They were Mikel Mulqueen, the driver of the VW Passat from which the stabber emerged, and Dominic Calder who was driving the car behind. They were 18 at the time of the murder and both were sentenced to life imprisonment with a minimum of 20 years each.

At sentencing it was made clear that they were being convicted under Joint Enterprise, the legal doctrine that allows secondary parties, those that are judged to have assisted or encouraged the principal offender, to be held as responsible as the person that carried out the act.

In December last year there was a second trial connected to the murder. In Court 14 of the Old Bailey, two more young men stood accused of killing Meshach Williams. One was a 17-year-old who can’t be named because of reporting restrictions; the other was 18-year-old Tjani Williams-Campbell. They were 16 at the time of the murder.  Both boys were, by their own admission, small time drug dealers who had left school without qualifications. Neither had any record for violent crime.

At this trial, the jury heard that the accused were passengers in the second car. Despite neither young man getting out of the car, the prosecution argued that they were present at the scene, were there as back up and intended that the stabber would cause Meshach Williams serious harm. This meant that under the doctrine of Joint Enterprise both could be found guilty of murder as secondary parties. 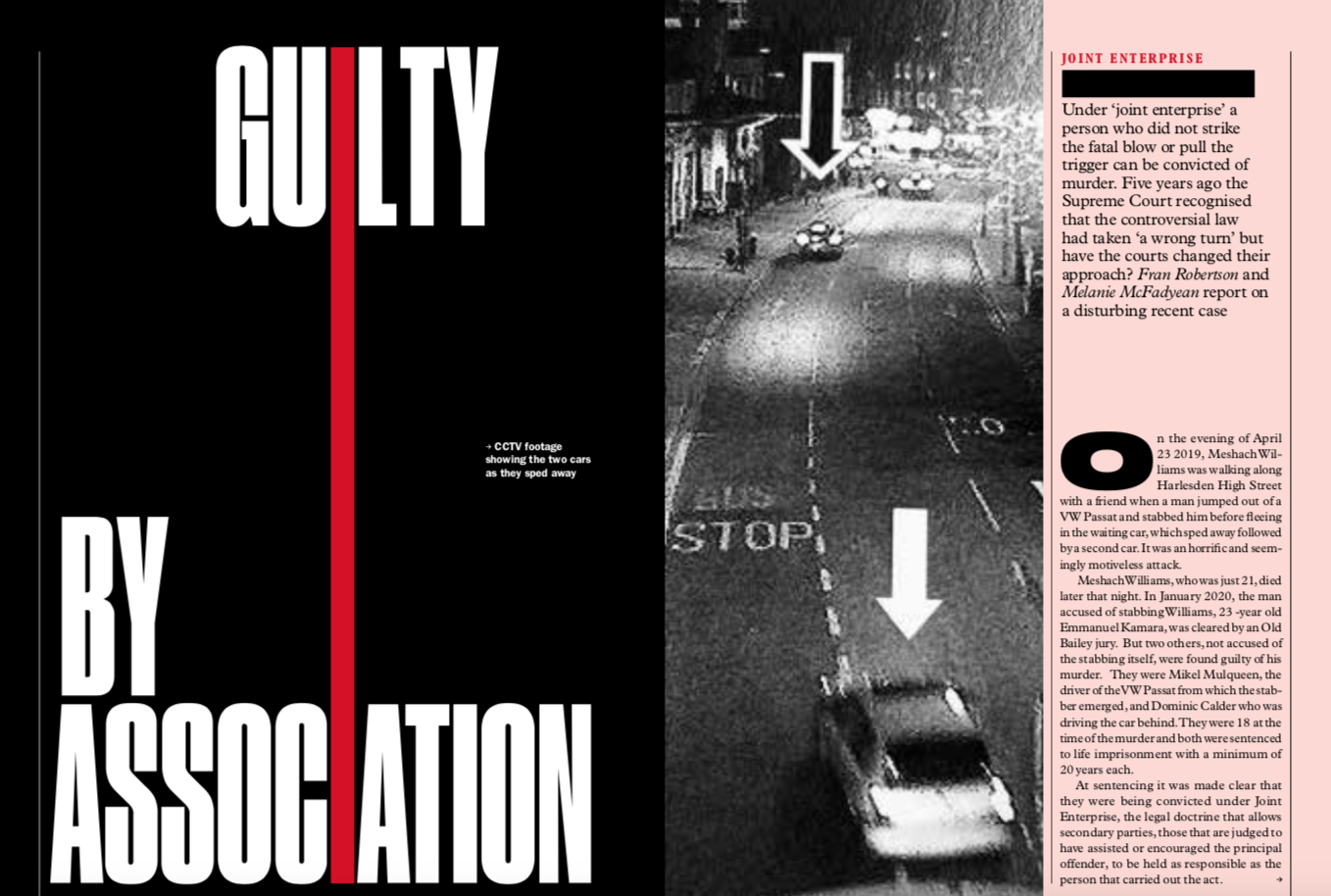 There was a surreal quality to the proceedings. Emmanuel Kamara, although acquitted at the first trial, was referred to  as the stabber throughout this second trial by the prosecution and the defence. Kamara seemed to have escaped conviction because his mobile phone had been left at his house, which meant there was no cell site evidence to link him to the scene. At any rate the younger boys appeared to hardly know him. They were present at the scene because they were friends of Mulqueen and Calder, the boys driving the cars.

The evidence presented by the prosecution consisted of CCTV footage that showed Calder, Mulqueen, the unnamed 17 year old and Tjani Williams-Campbell spending  most of  the day together, hanging around the streets of Harlesden, riding bikes and smoking and selling weed. The unnamed boy was seen to be walking on crutches, the consequence of a football injury a couple of weeks earlier.  The footage went on to show the events leading up to the murder, the cars driving around Harlesden and the moment of the stabbing.

Very little evidence was produced that was specific to either of the younger defendants, other than telephone cell site evidence which showed that Williams-Campbell’s phone was used to call Mikel Mulqueen who was driving the car in front.

None of this evidence was disputed. The boys admitted to being in the car – but insisted that they were there as passengers, and that they didn’t know what was going to happen. Their defence teams argued that no evidence was produced to show they were part of a plan or that either boy had any reason to want to be part of an attack on Meshach Williams.  Beyond their presence in the car, it was the defence’s position that there was no evidence to back up a charge of murder.

This, however, is where the law of Joint Enterprise comes in. 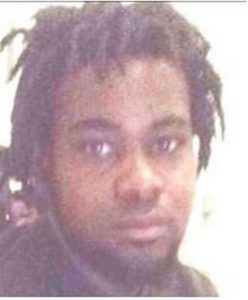 The law around secondary parties in murder cases has been contentious for many years. Earlier this year the All Party Parliamentary Group on Miscarriages of Justice called for an ‘urgent’ review of the law. This follows two highly critical reports by the House of Commons’ justice committee which in 2014 warned ministers of the ‘danger’ in ‘justifying’ joint enterprise on the basis that it ‘sends a signal or delivers a wider social message’ rather than finding people guilty in accordance with the law.

The law around secondary parties in murder cases has been contentious for many years.  In 2015 we made a documentary film for the BBC which showed how Joint Enterprise can allow for the prosecution of murder even where there is no evidence of active involvement. One of the cases we looked at was of 15 year old Joseph Appiah. He was convicted of murder even though the evidence showed that he was 200 metres away at the time of the stabbing.

At the time we were making the documentary, there was growing concern in legal circles that the doctrine was being used too widely and that too many people, mainly young, and often from BAME backgrounds, were being convicted of murder for peripheral involvement in the crime.

In 2016, a groundswell of concern led to a hearing at the Supreme Court in the case of R v Jogee.  The judges ruled that the law had indeed taken a wrong turn. Until Jogee, secondary parties could be found guilty if it could be proved that they “‘foresaw”’ the possibility that the crime would take place. The change in the law meant that the prosecution would need to prove that the defendant intended for the crime to happen. Foresight on its own is no longer sufficient to secure a conviction but can still be used as evidence of intention.

The thorny issue of presence however was not touched upon in the Supreme Court ruling and continues to loom large in Joint Enterprise trials.  Although it is long established that ‘mere presence’ is not enough to secure a conviction, presence at the scene is easily conflated with encouragement.  In these circumstances, convictions can be based on conjecture of what a person may or may not know or may intend.

Barrister Andy Hall QC, who has defended many Joint Enterprise cases, told us this reliance on presence is ‘the doorway to the life sentence for most of these kids, because how do you prove that you weren’t going to assist should the need arise?’

Once a young person is in the dock charged with Joint Enterprise murder they face an uphill struggle.  Often it’s difficult for them to give evidence because it would mean incriminating others and the law of the streets means they can’t be seen to be a grass.  This was the situation for Calder and Mulqueen at the first trial when neither gave evidence.

In the absence of the defendant’s testimony, the prosecution are able to weave narratives, often involving gangs, drugs, drill music and videos that build up a picture of guilt which encourages juries to make decisions in the absence of supporting evidence.

Back at Court 14, after a two-week trial, the jury retired.  Following eight days of deliberations, the jury acquitted the 17 year old, but convicted Tjani Williams-Campbell of manslaughter on a 10-2 majority verdict.  Both young men had given evidence at trial and it was possible to see why the jury might have found Williams-Campbell more culpable. It was his phone that had been used to call Mikel Mulqueen, the driver of the first car out of which the stabber emerged. But should this have led to a conviction of manslaughter?  Or in the case of Dominic Calder – the 18-year-old driver of the second car – should he be judged as culpable as the actual stabber, not yet bought to justice.

Tjani Williams-Campbell was given a sentence of nine years and four months. The unnamed 17 year old who was acquitted, had spent a year on remand, locked up in a youth offenders institute on the flimsiest evidence, charged with a murder that he played no part in.

It is not possible to say how many people have been convicted of Joint Enterprise murder.  Despite a recommendation by House of Commons’ Justice Committee in 2014 that regular statistics be collected, a recent FOI response from the Home Office stated that there are still ‘no means to specifically capture data on whether the prosecution have relied on the doctrine of joint enterprise in presenting their case’.

But anecdotally, it is being used more than ever. According to Anand Beharrylal ‘in the vast majority of homicide cases that I do, there is always an element of Joint Enterprise. This is just one case.  – but consider how many others there are where people are hanging around together and one does something stupid and the net is then cast to catch all of those present at the time?’

We followed this case to try to understand how Joint Enterprise is still being used. There’s a widespread belief that since Jogee  the problems associated with it have gone away.  Some of the lawyers that we have spoken to argue that the law is now working as it should and that it is much harder to get a conviction. But this case suggests that there are still serious problems with the way that it is being applied.  Culpability continues to be stretched to reach those on the periphery of a crime – and unknown numbers of young men continue to be convicted of murder, despite no evidence of active involvement and sentenced to longer terms in prison than they have been alive.

Fran is a documentary maker and founder of Two Step Films; and Melanie is a freelance journalist and lecturer at City, University London

Our print magazine is Proof. Contributors include Michael Mansfield QC, Bob Woffinden, David Rose, Eric Allison and Ian Cobain.
Buy Proof Magazine
The latest issue (Why legal aid matters) includes Helena Kennedy QC and Martha Spurrier in conversation, David Conn on the legacy of Hillsborough - plus how to build your own law centre.
Fran is a documentary maker and founder of Two Step Films; and Melanie is a freelance journalist and lecturer at City, University London

One response to “Still guilty by association?”

'I'm the only person to have my conviction quashed.…
Ken Loach: 'It's what happens when you leave the…
Half of women convicted under joint enterprise not…
Family of Jordan Towers vow to fight on after failed appeal
Policing Bill risks entrenching 'failed and unjust'…