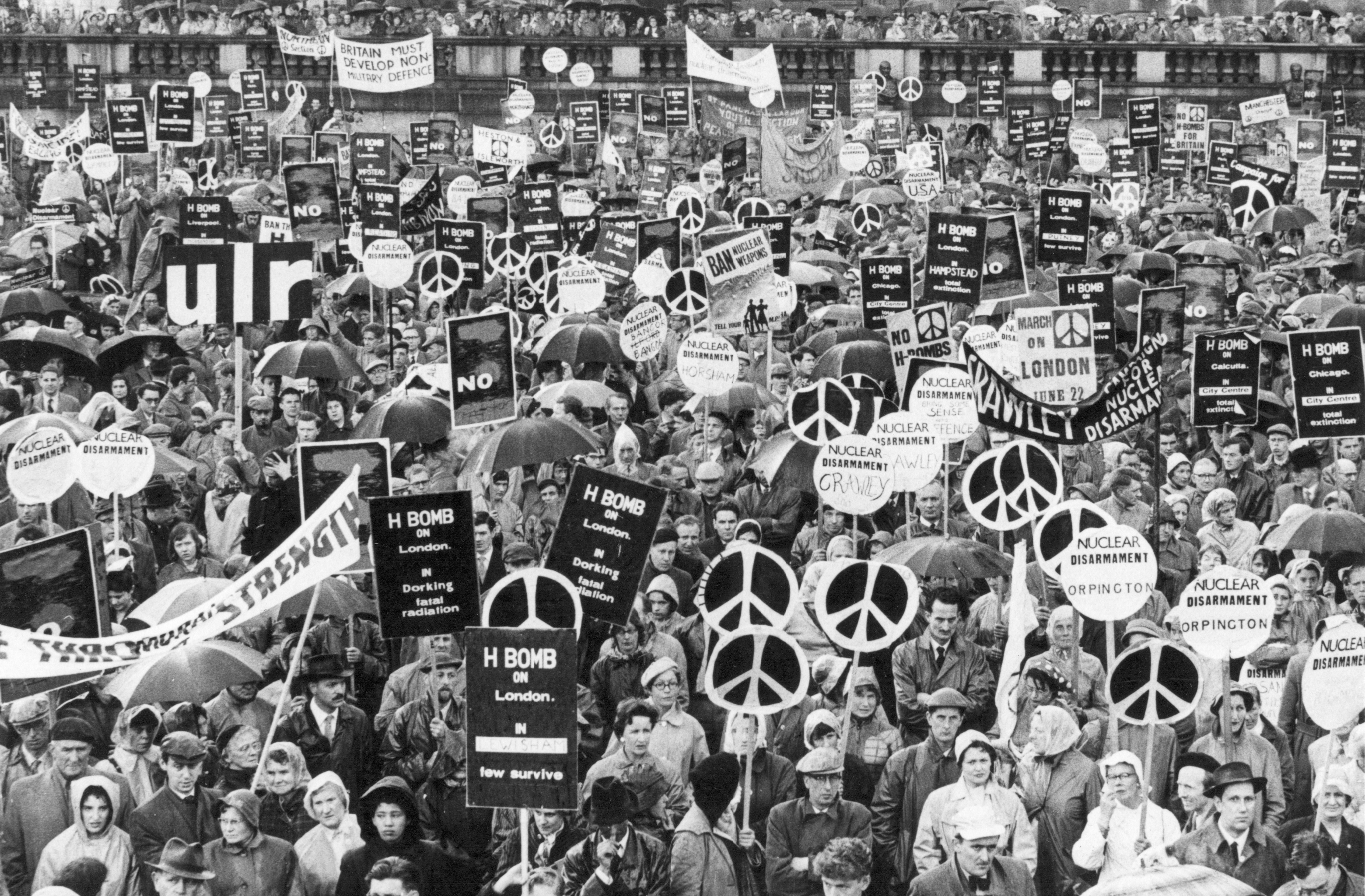 It was recently announced that the Campaign for Nuclear Disarmament (CND) will feature as a core participant in the second tranche of the Undercover Policing Inquiry (UCPI).The Public Interest Law Centre (PILC) will act as CND’s appointed legal representative. Here PILC’s Saskia O’Hara examines how one of the world’s most influential peace organisations became a target for state infiltration—and asks whether the UCPI will finally uncover the truth about the extent of police spying on CND.

In October 1952, the British state successfully tested its first atomic bomb, becoming the third country in the world after the USA and the Soviet Union to develop nuclear weapons. Progressives in Britain, who had witnessed the horror of Hiroshima and Nagasaki, were spurred into action. In the late 1950s the New Statesman published an editorial outlining the need for a mass movement against nuclear weapons.

CND was born in February 1958. The five thousand people who attended its first meeting resolved that Britain must ‘renounce unconditionally’ its nuclear weapons and work towards a general disarmament convention. Through a wave of protests and demonstrations, the campaign succeeded in building a globally recognised movement for nuclear disarmament. CND and its famous peace symbol became part of the fabric of UK society.

It has long been known that in the 1980s, when CND was at the height of its influence, the campaign became the target of the Special Demonstration Squad (SDS) of the Metropolitan Police. However, initial disclosure ahead of Tranche 2 of the UCPI suggests the level of infiltration to have been far greater than was previously thought.

In 1983 CND organised an anti-nuclear protest in London that was attended by over 200,000 people. As Joan Ruddock, then-chair of the organisation, said later: ‘The demonstration put paid to the notion that the peace movement is on its last legs.’ In the same year, CND organised an estimated 80,000 people to form a human chain stretching 14 miles across Berkshire’s ‘nuclear valley’.

Sizable numbers of people attended CND demonstrations throughout the 1980s. Yet Special Branch reports on the demos repeatedly emphasised the low risk of public disorder. Of the protest against nuclear missiles in London, police files state that ‘the vast majority of the 200,000 or so persons attending this event were pacifists with no overt leanings to extremist, subversive or political groups [sic]’.

Why, if Special Branch recognised the majority of CND activists as ‘pacifists’, was the campaign infiltrated? This is the first of many questions the UCPI will need to answer.

Questions for the inquiry
So far the UCPI has identified two undercover police officers who targeted CND. Between 1981 and 1984, ‘Timothy Spence’ (HN88) is understood to have infiltrated CND in east London. The same officer is also believed to have infiltrated the Stoke Newington and Hackney Defence Campaign and the Hackney Campaign Against the Police Bill.

Little is publicly known about the true identity or spying activities of these two officers. We await further disclosure from the Inquiry—but we are also appealing to the public, and especially veterans of the peace movement, for more information about ‘John Kerry’ and ‘Timothy Spence’

Will the UCPI uncover the truth?
In Tranche 1 of the UCPI, PILC succeeded in demonstrating that police infiltration of protest movements and campaign groups between 1968 and 1982 was not passive. For instance, UCPI disclosures have revealed that an undercover officer actually led the Troops Out Movement in the 1970s, contributing—in our view—to the movement being derailed.

Official documents and witness statements from this period reveal a pattern of undercover officers infiltrating campaigning groups as a means of building up their profile in order to subsequently target other, sometimes more radical, organisations.

It is in this context that the state turned its attention to the peace movement and CND. Was this another case of police spies leapfrogging their way through left-wing organisations? Did undercover officers continue to seek positions of power and leadership in progressive groups during the 1980s?

We are determined to uncover the truth about the British state’s infiltration of CND. We do so on behalf of our clients, to honour truth and history, and, importantly, with an eye to the future. Earlier this year Boris Johnson announced an end to thirty years of gradual disarmament, and the government has recently given itself the power to increase its Trident nuclear warhead stockpile by more than forty percent.

The UK still urgently needs a peace movement. Through the UCPI, we hope to equip that movement with knowledge of the past that could inform the next phase of its struggle.

If you have any information relating to the activities of ‘Timothy Spence’ or ‘John Kerry’, please contact paul.heron@pilc.org.uk so that this information can be brought before the Inquiry.

Saskia is a paralegal at the Public Interest Law Centre

Our print magazine is Proof. Contributors include Michael Mansfield QC, Bob Woffinden, David Rose, Eric Allison and Ian Cobain.
Buy Proof Magazine
The latest issue (Why legal aid matters) includes Helena Kennedy QC and Martha Spurrier in conversation, David Conn on the legacy of Hillsborough - plus how to build your own law centre.
Saskia is a paralegal at the Public Interest Law Centre

'Little faith' in spy cops inquiry getting to truth
Episode 2: 'This isn't spying on terrorists. This is…
Hostile Environment policies have put migrants’ lives at…
Episode 1: ‘A mother died - and a campaigner was born’
Spycops inquiry: ‘An establishment cover up taking place…