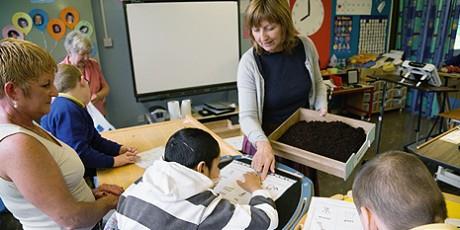 A generation of children with special educational needs and disabilities have been let down by the government’s piecemeal and reactive approach to supporting them and failures to implement the 2014 reforms that should have led to transformative change, MPs say in new report.

‘We are confident that the 2014 reforms were the right ones,’ the education select committee says, following an 18-month inquiry into the implementation of the reforms introduced by the Children and Families Act 2014. ‘We believe that if the challenges within the system – including finance – are addressed, local authorities will be able to discharge their duties sufficiently’ and the reforms could ‘transform’ the educational experiences of children and young people with special educational needs and disabilities (SEND).

‘A generation of children and young people with special educational needs and disabilities is failing to receive the support it deserves, with poorly implemented legislation leaving families facing a nightmare of bureaucracy, buck-passing and confusion.’
Education Committee

According to the Committee, over the past five years, ‘poor administration and a challenging funding environment’ have led to poor implementation of the reforms which has resulted in ‘confusion and at times unlawful practice, bureaucratic nightmares, buck-passing and a lack of accountability, strained resources and adversarial experiences’.

Some 700 written submissions as well as oral submissions given during 12 oral evidence sessions were received by the Committee during the course of its inquiry. Parents described their experiences of the current SEND system, which included children being unsupported, unable to attend school, isolated, bullied and ostracised and suffering psychological distress and serious mental health problems as a result. They also described having to reduce their work hours, or give up their jobs altogether, fighting on their own to ensure local authorities and schools engaged with them and supported their children and the impact on their own mental health and that of other family members.

A mother of a child diagnosed with ADHD described the effects of school exclusion on him after his school failed to comply with the SEND code of practice: ‘He was suicidal for many months and self-harmed. I had to give up my job for 12 months to care for him as it was not safe for him to be left alone. As a parent, it is unimaginably devastating to see your child in so much emotional pain. My son received very little education throughout year 9 and 10 and had virtually no social contact with people his own age. I feel that part of his childhood has been taken from him and the impact on the family, including his two siblings, has been huge.’

The Committee’s report stresses the ‘enormous pressures’ faced by local authorities and schools in funding the transformative change the reforms were intended to achieve and the ‘tension between the child’s needs and the provision available’.

Councillor Anntoinette Bramble, Chair of the Children and Young People’s Board at the Local Government Association (LGA), told the Committee that ‘the LGA did a survey with Isos and there is a £472 million SEND shortfall’. The Committee says the ‘significant funding shortfall is a serious contributory factor to the failure on the part of all involved to deliver on the SEND reforms and meet children’s needs’.

The inquiry also found that serious errors made by the Department for Education in its administration of money intended for change means local authorities have been allowed to spend their implementation grant with little or no oversight or safeguards and money meant for ‘systematic change’ has instead been spent on ‘business as usual and maintaining the status quo’.

The Committee acknowledges that the Government has recently announced extra funding for SEND but warns that any additional money will be ‘wasted and make little difference’ unless we see a ‘cultural change’.

‘Of course, extra funding for SEND announced in the spending round is welcome,’ Robert Halfon MP, chair of the Committee, said. ‘But the truth is that more cash will fail to make a difference to children with special educational needs unless there is a radical change of approach throughout the system.’

The absence of a rigorous inspection regime and an unwillingness to grapple with unlawful practice has led to ‘chaos’ for the past five years. ‘We are concerned that the Department has left it to local authorities, inspectorates, parents and the courts to operate and police the system. There is a clear need for the Department to be more proactive in its oversight of the way in which the system is operating,’ the Committee says.

Halfon said: ‘Many parents face a titanic struggle just to try and ensure their child gets access to the right support. Families are often forced to wade through a treacle of bureaucracy, in a system which breeds conflict and despair as parents try to navigate a postcode lottery of provision. A lack of accountability plagues the system as local authorities, social care and health providers too frequently seek to pass the buck rather than take responsibility for providing support.’

‘The Department for Education, and the country as a whole, is also not ambitious enough for its young people with SEND,’ the Committee warns. ‘A lack of focus by the Department on quality post-16 provision and opportunities for young people with SEND perpetuates this lack of ambition and impacts on the routes that young people are taking post-16.’ The inquiry found that many eagerly anticipated initiatives, such as supported internships and apprenticeships, are ‘limited, lacking in sufficient support and not living up to their ambition and name’.

The Committee calls for ‘a more rigorous inspection framework for local authorities with clear consequences for failure, a greater focus on SEND in school inspections, a direct line for parents and schools to appeal directly to the Department for Education where local authorities appear not to be complying with the law, powers for the Local Government and Social Care Ombudsman to investigate complaints about schools and the development of more employment and training opportunities for post-16 young people’.

‘We need to end this major social injustice,’ Halfon added. ‘The Department for Education cannot continue with a piecemeal and reactive approach to supporting children with SEND. Rather than making do with sticking plasters, what is needed is a transformation, a more strategic oversight and fundamental change to ensure a generation of children is no longer let down.’

'Making do with sticking plasters when we need…
Hackney Council to pay £26,000 for failing to secure…
MPs call for resumption of visits to prisons and a review of…
MPs 'shocked and appalled' at conditions at privately-run…
Average custodial sentence for children's offences increased…