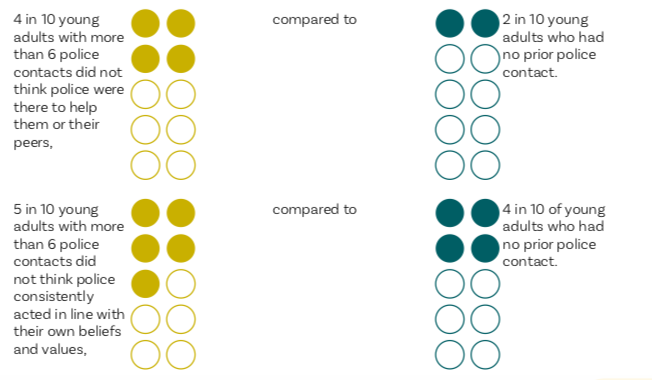 Seven out of 10 young adults think that the police were treat them differently if they come from a deprived area or if they are a person of colour, according to a new study conducted by a leading criminal justice charity in the UK calling for police to divert young adults into support and reduce the number of arrests for low-level crimes.

The report, released by UK charity Revolving Doors Agency, found that over half of young adults did not think that the police consistently act in line their own beliefs and values (54%) or would act compassionately towards them (53%). The problem was found to be exacerbated for young adults with mental health needs, disabilities or long-term health conditions.

The survey of 689 young people (aged between 18 and 25 years) suggested that police should develop a common definition of vulnerabilities and train police to identify them, citing ‘low maturity, poverty, structural inequalities, mental health conditions, disabilities and neurodiverse conditions’ as examples.

Calling on police leaders to engage with young adults locally and nationally, it was suggested that a lack of understanding of vulnerability could lead ‘to a new generation who enter adult life with both reduced life chances and negative perceptions of the police’,

The report has received support from Police and Crime Commissioners across the country. David Jamieson, West Midlands Police and Crime Commissioner, commented: ‘Diversionary activity is not only more effective in reducing crime than short sentences, but it is also much more cost effective and can save the taxpayer a significant amount of money. We should be investing in tackling the root causes of crime instead of picking up the pieces later down the line.’

Julia Mulligan, North Yorkshire Police, Fire and Crime Commissioner, said: ‘The traditional approach of sending people to court for minor offences simply does not work and often makes things worse. We need to be helping those who offend to reform and address underlying trauma’.

The report comes only a week after one thousand young, black men were removed from a gangs’ database used by the Met police, after a review found that they posed no or little risk of committing violence. Highlighted in the report were statistics that Black young men are twice as likely to be arrested, and more likely to be held in custody on remand, for relatively low-level and non-violent offences. It was further emphasized that Black young adults are overrepresented in referrals from the criminal justice system, particularly through the use of restrictive interventions and detentions under the Mental Health Act.

Chief Executive of Revolving Doors, Pavan Dhaliwal, said in a statement released after the report: ‘The pandemic has brought into sharp focus the need to tackle the underlying causes that lead to young people falling into the system, namely, poverty, trauma and inequality. Now is the time to rethink our approach.’