Sharp falls in government spending on justice is ‘out of step’ with cutbacks to other public services, according to a new report  by the Bar Council. In the decade between 2008 and 2018, overall government spending has increased by 13% even as funding for the Ministry of Justice has been slashed by 27%.

Investment in justice has lagged well behind other areas of the public sector, with funding for education falling by just 5% and spending on healthcare rising by 25% over the same period. The report argues that ‘an under-resourced justice system imposes costs on society and damages economic welfare’. 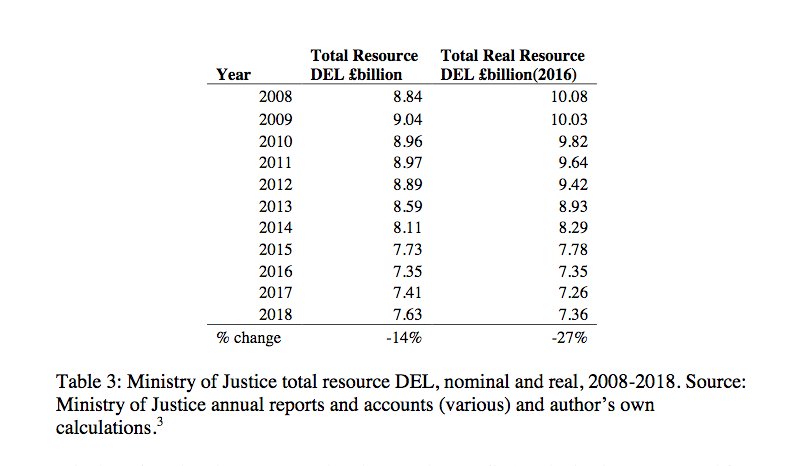 Professor Martin Chalkley, who produced the research, argues that the data challenge the view that swingeing cuts to justice are solely austerity-induced, suggesting that factors other than the aftermath of the financial crisis may be at play.

‘In the last 10 years, the size of the economic “cake” available for public spending has in fact grown,’ said Professor Chalkley, who is a professor of economics at the University of York. ‘Cuts to justice are clearly way out of step with what happened in other areas of public spending.’

Andrew Walker QC, Chair of the Bar, commented: ‘For a system that is fundamental to a healthy democracy, society and economy, this scandalous. The state is failing in its fundamental duty to provide justice for its citizens.’ Adding that the budget had been ‘vastly over-cut’, Walker suggested that the general public was now ‘feeling the effects’.

Legal aid funding has plummeted since 2008, falling by 32% – and, as the report maintains, there is ‘no reason to suppose that demand for justice […] has declined over the last 10 years. To the contrary, increasing poverty and stagnant wages might be associated with increasing demands’.

Of particular concern was the reduction in the Crown Prosecution Service’s budget, which now makes up just 0.05% of overall public spending. The CPS has suffered a 34% decline in funding over the past decade. Over the same period, the number of defendants prosecuted by the CPS has reduced by roughly 20%, resulting in a significant fall in the money available for each prosecution.

‘With less money spent per prosecution,’ said Walker, ‘both the victims of crime and the innocent who are prosecuted are being let down. The government is gambling with public safety and the rights of individuals, so it can scrimp on what is already a relatively tiny budget. As disclosure and prosecution failings showed this year, such cuts carry enormous risks.’

In its conclusion, the report identifies the ‘fundamental question’ as whether it is desirable to ‘reduce the public funding support for the justice system and access. If it is not,’ it continues, ‘then there must be acknowledgement of the fact that the cuts to justice are savage and need to be addressed.’