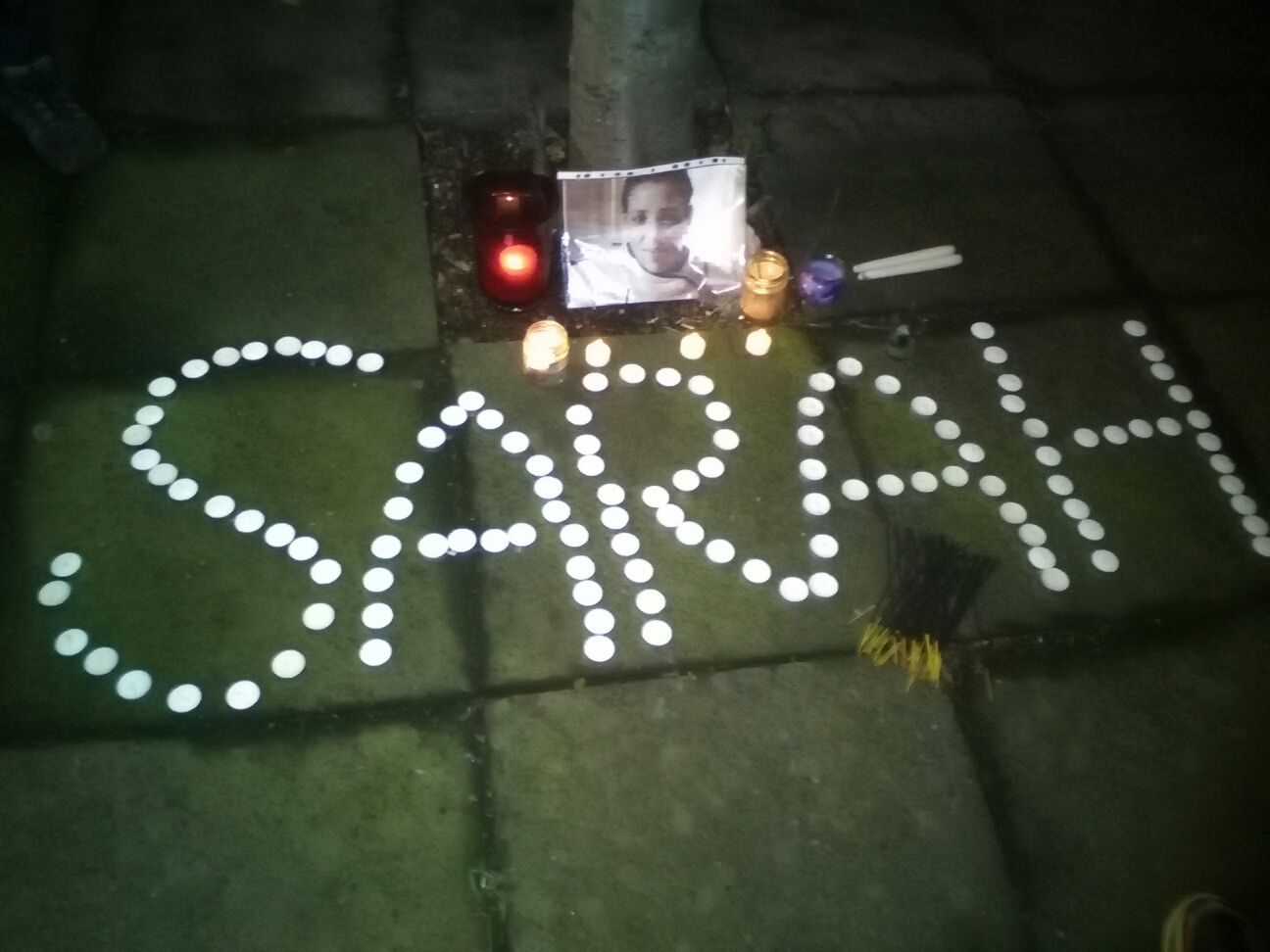 From Monday’s vigil outside Holloway Prison

Sarah Reed was a black woman who died last month in Holloway Prison in suspicious circumstances. She was just 31 years of age and in her short life she experienced terrible tragedy, instead of receiving support and understanding, she was failed repeatedly by the authorities that ought to have demonstrated a duty of care for Sarah and protected her from harm and danger.

In 2003 Sarah’s baby died, following an illness, she and her partner had to transport their deceased baby from the hospital to the undertakers in a taxi.

The loss and the events after caused Sarah to suffer with depression and impacted on her mental health over the coming years. During this period she was detained under Section 3 of the Mental Health Act and while in the Maudsley Hospital reported to her family that she had been the victim of sexual assault and attempted rape.

When she defended herself from her attacker the hospital staff called the police, not on her attacker but on Sarah and she was arrested. Instead of her being in a safe place where she could heal and get better, the assault on her exacerbated her existing mental health, resulting in her being placed in the hands of an institutionally racist institution, the Met Police.

Sarah’s family believe that she was deliberately targeted by the police because she had previously challenged a racist police officer who violently and physically assaulted and abused her, leading to that police officer losing his job.

Questions must also be asked as to why the hospital who knew her history and how mentally unwell she was called the police, knowing that she would be traumatised, given her past experience with them.

Sarah was accused of shoplifting and police were called. PC Kiddie can be seen in video footage here, pulling Sarah’s hair, dragging her to ground and punching her repeatedly before placing handcuffs on her (here). PC Kiddie was subsequently sacked in 2014.

But this was no consolation for Sarah.

Magistrates remanded Sarah to prison, still very ill, fragile and suffering with her mental health. As if a mentally ill woman going to prison was not bad enough, Sarah was not given any medication which would have made things much worse for her. Given that the vast majority of women who are incarcerated during remand, subsequently do not receive a custodial sentence, there was no reason for magistrates to place her in prison and she should not have been given her mental health.

Duty of care
On January 11, Sarah’s family received a phone call informing them that Sarah, whilst lying on her bed, had strangled herself to death, which should be physically impossible to do. The family were told to come to the prison immediately but when they arrived the prison refused to allow them to see Sarah’s body. 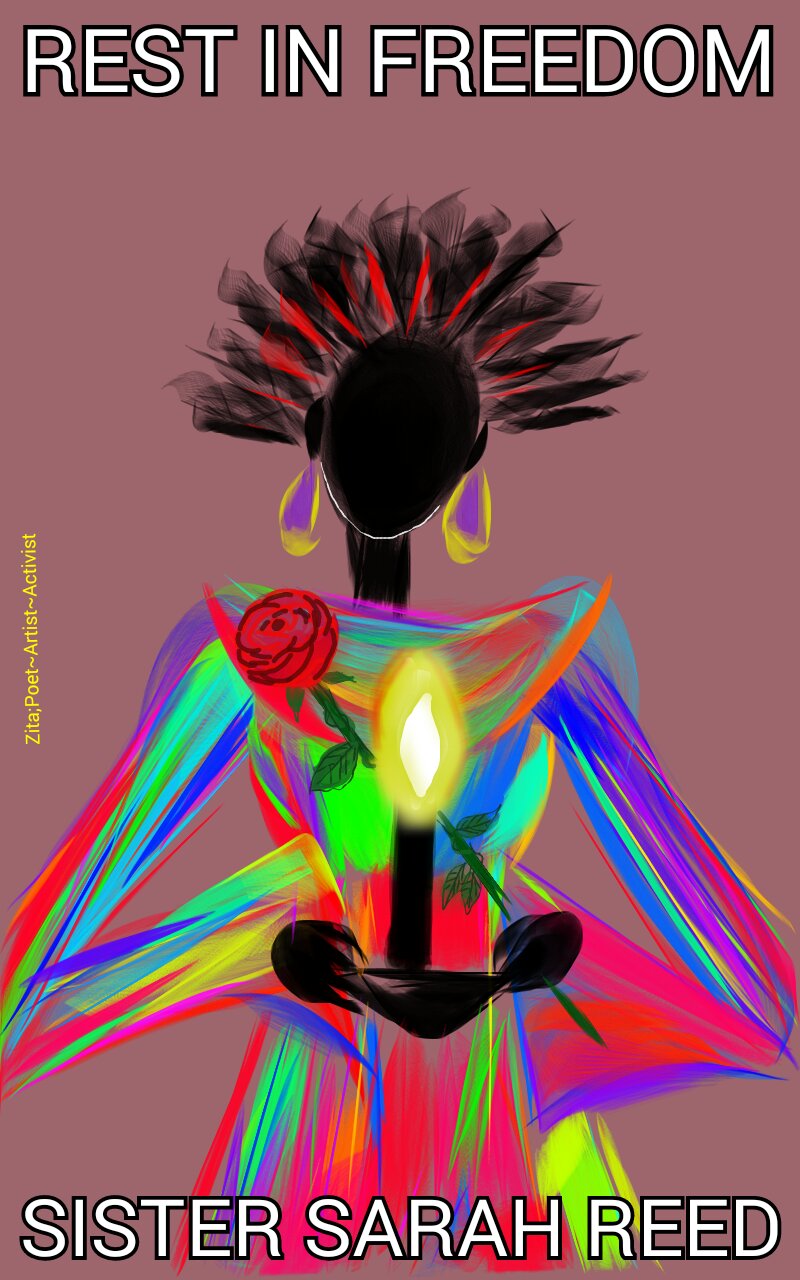 ‘Rest in freedom’ by Zita Holbourne

Sarah Reed was the victim of British institutions that failed in their duty of care towards her, she was failed by hospitals, by the Met Police, by the judicial system, the mental health system, by the courts and by the prison. She was a young woman who had been served a sad and tragic blow in losing her new born baby – what she needed was nurturing, support, care, understanding and healing, instead she was subjected to a catalogue of failures and neglect by institutions that had a duty of care towards her, who should have protected her from further harm, pain and suffering, but instead they subjected her to torture and made her mental health worse, ultimately leading to her death.

There are many questions that must be answered from the hospitals, to the police, the courts and the prison. The inquest into Sarah’s death will need to uncover the truth.

Sarah was a vulnerable woman, she needed care not punishment. Sadly, her story is not an isolated one.

Black women are treated like second class citizens, experience double discrimination, are negatively stereotyped as aggressive and threatening when they stand up for their rights or speak out about injustice, they are the group hardest hit by job cuts, more likely to work in part time, casual and temporary jobs, experience a double pay gap and austerity is amplifying race and sex discrimination. This leads to deepening poverty and as vital and specialist services cease to exist due to cuts, there is less or no support when they need it. It’s no wonder that they would suffer with depression and mental health issues.

The media play a part in negatively stereotyping black women. In Sarah’s case there was no media coverage or public outcry following her death. It took my co-chair, Lee Jasper to make sure people heard about Sarah’s story through social media effectively shaming the mainstream media into covering and then only week’s later.

On Monday night a vigil took place outside Holloway Prison to coincide with the day that Sarah was laid to rest by her family, with the funeral service taking place in the church her grandfather founded in London. There was a large presence by black women who spoke about their own encounters with the police, mental health service and judicial system, echoing the experiences Sarah had in her short life.

At the vigil, the national press were noticeably absent. One more sign that the lives of Black women are considered cheap.

Sarah’s life mattered.  She was a black woman, a mother (she leaves a daughter behind), a daughter, she was a human being. What happened to the humanity of those who failed her? We need to know.

A community campaign has been set up on Facebook to give solidarity and support to the family going forward (here). On Twitter we are using the hashtags #SarahReed #SayHerName #BlackLivesMatter

Luke Naish: 'a totally unacceptable loss of life that could…
One in three police forces refer allegations of sexual…
Sarah Everard inquiry will lack power and be a ‘disservice’…
Prisoners miss more than four out of 10 outpatient…
Met 'acted appropriately' at Sarah Everard vigil, claims…