Ricky Tomlinson: ‘The judge was a gobshite. He didn’t have a clue…’

Ricky Tomlinson: ‘The judge was a gobshite. He didn’t have a clue…’ 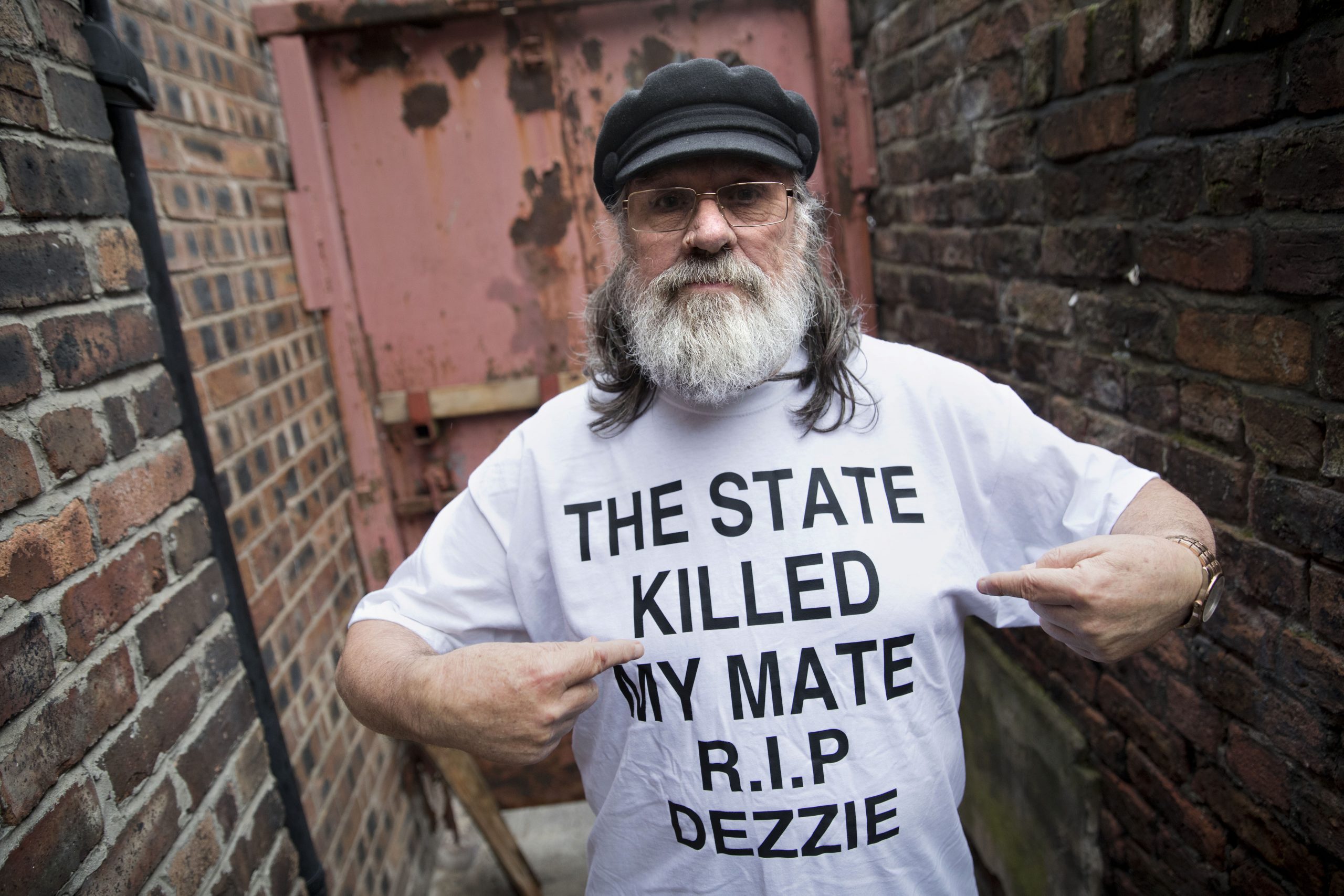 ‘The trial was a cock-up from start to finish. It was politically motivated,’ reflects Ricky Tomlinson, the veteran actor, star of Royle Family but, for the purposes of this interview, one of the surviving members of the Shrewsbury 24. Photos of Ricky Tomlinson by Jess Hurd.

Tomlinson remains outraged about a criminal trial that took place almost 45 years ago. In 1973 he together with six others were charged under arcane legislation (Conspiracy Act 1875) for offences relating to intimidation and damage to property for picketing during the first nationwide industrial action by the building trade. Tomlinson and his friend Des (Dezzie) Warren received two and three years respectively. The builders always insisted that they were framed by the Heath government to send out a message to other union activists contemplating industrial action.

Hillsborough, Orgreave, Shrewsbury
The parallels with Hillsborough and indeed Orgreave have become shocking clear – see here. There is evidence that some of the original statements were destroyed as part of a deliberate policy.

‘We got reports from two police chiefs where the picketing took place saying that there’s no charges to answer – they were overruled by the powers that be,’ Tomlinson continues.

Despite heavy policing on the day – Tomlinson recalls 60 to 80 police officers – there were no arrests, no cautions and no names or addresses were taken. Almost four months later, 271 criminal charges were laid.

The trial itself is mired in suggestions of outrageous state interference. ‘The judge was a gobshite. He didn’t have a clue. He wasn’t a criminal judge – he was an ecclesiastical barrister who had been sort-of elevated to take over the trial,’ the actor says.

Tomlinson recalls his brothers being pulled out of the public gallery and interrogated. ‘When I got sentenced the foreman of the jury and a fellow juror jumped up and started boxing. The two of them had been persuaded to change their minds because they thought we were only getting fined fifty quid.’ Apparently, the foreman later explained that a court official had incorrectly informed him of the likely outcome when the jury was deadlocked.

Lord Widgery, Lord Chief Justice, dismissed the appeal, saying: ‘The deterrent effect of the original sentence has contributed to a period of relative peace.’

While in prison Warren and Tomlinson were deliberately uncooperative. ‘We wouldn’t work and we wouldn’t just soldier on. All the time I was in prison I would not shut my own cell door. I’d never ring the bell. I wanted nothing off them. That’s why we spent so much time in solitary confinement and the segregation unit.’ Tomlinson even refused to leave prison on his release date until friends persuaded him that there might be repercussions for Warren who was still serving his sentence.

Whipping boys
It is a stubbornness that characterises Tomlinson’s campaign. He was not only a thorn in the government’s side, but he has also clashed with apparent allies. He feels badly let down by the trade union movement, who refused to fund his trial and removed him from the TUC conference after his release from prison. He calls GMB general secretary Paul Kenny ‘a shithouse’ for accepting a knighthood. He was badly let down by Amnesty International, who originally supported him and Warren as prisoners of conscience but subsequently ‘unadopted’ them. The group eventually conceded that they had been ‘leaned on’ by the government. They released a statement in May 2016:

‘It is clear that the UK government sought to influence Amnesty International’s decision to take up the case. Forty years on, it is impossible to state conclusively that the pressure unduly influenced Amnesty International’s internal decision making process; however, we acknowledge that the organization at the time did not act in a manner that would meet research and casework standards to which we adhere today.’

Since his release Tomlinson has been active in trying to uncover the truth about the Shrewsbury prosecutions. He is working with Des Warren’s son Andy.

So why does he think were they were made an example of? ‘It wasn’t done particularly to hurt the building workers. We were the whipping boys for the miners. We were before Hillsborough, before Orgreave. We were the starting point. They got away with it with us.’

Tomlinson is convinced that one of his co-defendants was a police informer. ‘It came out during the trial that our telephones were tapped. Nothing was done about it.’

The actor is following the progress of the Pitchford Inquiry into undercover policing. The case is till under review by the miscarriage of justice watchdog the Criminal Cases Review Commission.

‘I’ve got no faith in the judicial system whatsoever. It’s more important to me that the public finds out what has been done to us. It’s an uphill struggle but we won’t give in.’ 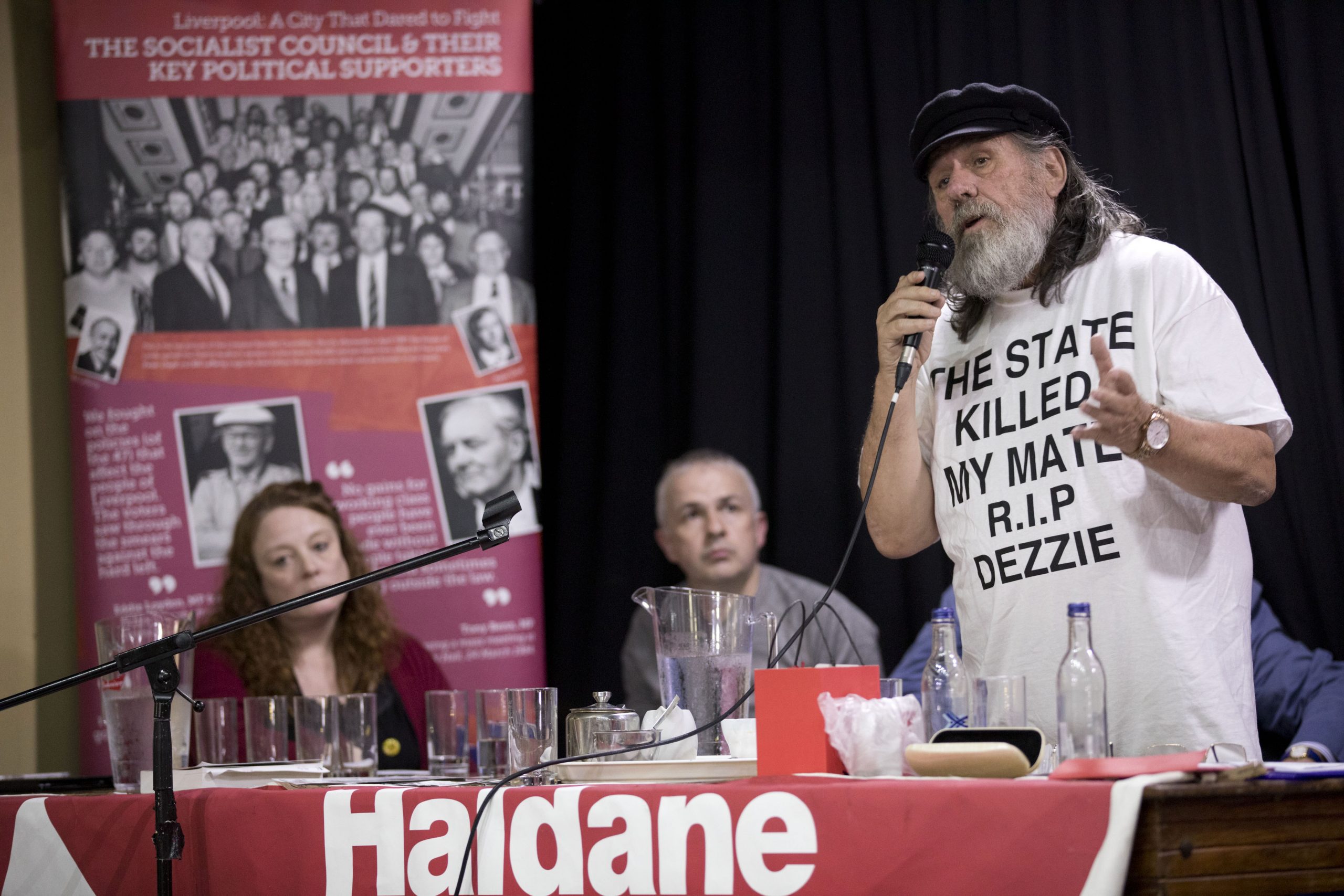 Kicking up a fuss
Tomlinson is adamant that the government is responsible for Des Warren’s death. ‘He went into prison a fine, big, strapping man,’ he says. ‘He was a steel fixer by trade and he came out of prison and never worked again. And the last time I was with him, he was strapped to a wheelchair and couldn’t hold his head up.’ Tomlinson says the medication Warren received in prison led to the Parkinson’s disease that killed him. ‘If [the government] thinks that’s wrong, well come and arrest me: prove that you never.’

With that in mind, Ricky Tomlinson is conscious that the campaign needs to move quickly. ‘Five of the lads are dead including Dessie – two died in their 90s – and so we haven’t got a lot of time. They’ve got no fucking intention of releasing the papers that will throw a light on this.’

When Tomlinson spoke to the Haldane Society at the Labour Party conference fringe event it was his 77th birthday. His energy was extraordinary, charging around the country gathering evidence, talking to people, tracking down documents and organising support.

‘Anyone at all who’s got any information – anyone who took part in the strike, whether they were for us or against us, if they want to get in touch through my solicitors [Public Interest Law Unit],’ he says. ‘They’re waiting for me to snuff it because I’m still here kicking up a fuss.’
A version of this article will feature in the next issue of Socialist Lawyer here

Nick Bano is a barrister at 1MCB Chambers. He practises in housing & community care, criminal defence and employment law. He is the editor of Socialist Lawyer magazine

Our print magazine is Proof. Contributors include Michael Mansfield QC, Bob Woffinden, David Rose, Eric Allison and Ian Cobain.
Buy Proof Magazine
The latest issue (Why legal aid matters) includes Helena Kennedy QC and Martha Spurrier in conversation, David Conn on the legacy of Hillsborough - plus how to build your own law centre.
Nick Bano is a barrister at 1MCB Chambers. He practises in housing & community care, criminal defence and employment law. He is the editor of Socialist Lawyer magazine

Six more members of the Shrewsbury 24 to have 1970s…
Episode 6: 'It was a political trial - start to finish'
'Not our finest hour': CCRC finally refers 'Shrewsbury 24'
'Prejudical' TV programme renders Shrewsbury 24 convictions…
'It is taken 47 years to recognise what happened. If this…