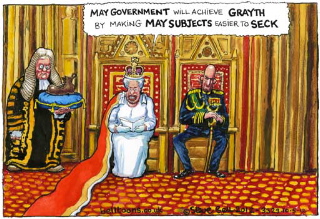 There was much pomp and ceremony at Westminster as the Queen set out her Government’s legislative programme for the forthcoming parliamentary session earlier this month.  As expected, the Queen’s Speech included an Enterprise and Regulatory Reform Bill, which – according to the BIS press release issued the same day – will, amongst other things: ‘Overhaul the employment tribunal system, and transform the dispute resolution landscape.’

Clearly, that leaves quite a lot of wiggle room for actual, specific measures, and naturally in the days immediately before the speech the press were busy speculating about what these specific measures might be. The somewhat ill-informed political editor of the Daily Telegraph, for example, predicted that the Bill would allow employment judges to consider unfair dismissal claims alone, without lay members. However, as any fool knows, regulations implementing that particular change came into force over a month ago.

Wiser (or, at least, better informed) commentators were predicting a specified period for Acas to offer early conciliation before any ET claim fully enters the ET system, and financial penalties for employers found by an ET to have acted maliciously. But then Vince Cable had given them a bit of a clue, by announcing these measures last November.

The most excited commentators, however, were those predicting that the Bill will implement the highly controversial proposal, first made last year in a report by the financier Adrian Beecroft, to abolish legal protection against unfair dismissal for those employed by small firms. Vince Cable appeared to have kicked this particularly odious proposal into Whitehall’s long grass, but clearly some in the Conservative part of the Coalition have not yet given up on the idea.

Will it make it into the Bill? Well, time will tell, and we may not have long to wait: there are reports that the Bill could be published as early as tomorrow.  And, today, Vince Cable has come out fighting, dismissing the Beecroft proposal as ‘complete nonsense’ and those advocating it as ‘zealots’. But I don’t think I could write any words that would convey the idiocy of any such a move more powerfully than this fabulous cartoon by the great Steve Bell, which appeared originally in the Guardian on 10 May, the day after the Queen’s Speech.

'Unnecessary and counterproductive': Human rights…
Queen's speech: Government to 'slam door shut on refugees'
Law to protect victims of domestic violence dropped as a…
Unconservative, constitutionally reckless but (probably) not…
Free speech and the culture wars