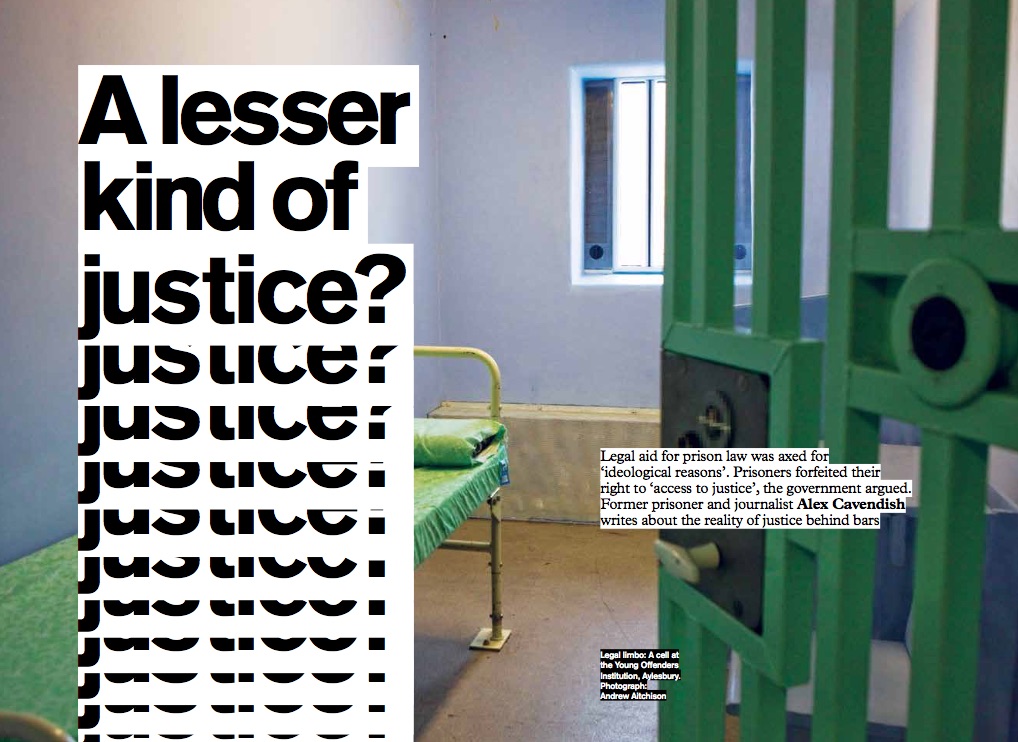 A lesser kind of justice: From Proof magazine, issue 3. All photos by Andy Aitchison

When people are asked for their views on ‘justice’ they very often respond based on their own experiences of crime and punishment. Alex Cavendish on the reality of justice behind bars

They can have very strong reactions to situations in which those in positions of power or authority appear to be acting unjustly, hence the popularity of online petitions demanding that certain decisions by government departments or agencies are reversed.

As early years research has demonstrated repeatedly, concepts such as ‘fairness’ are well appreciated, even by very young children. And how many parents or carers are all too familiar with the refrain: ‘It’s not fair!’

Yet in certain circumstances there also seems to be an absence of popular support for those basic principles of justice and fairness. In the case of those held in custody, for example, normal rules of fairness often seem to have been suspended. Prisons are places where retribution is dished out, rather than where ideas of justice and fairness are reinforced.

Prisoners are defined as vulnerable because of their lack of personal freedom and autonomy. Inmates in our prisons are often subject to the whim of individual members of staff and managers or of local interpretations of Prison Service Orders (PSOs) and Prison Service Instructions (PSIs).

What one officer refuses, another may permit amid the myriad of pettifogging rules and regulations that no single person can ever really fully remember. And everything in jail is about bureaucracy and form-filling.

Given that around half the adult male prison population has a standard of literacy at or below the level expected of an 11 year old, this in itself tends to exclude many prisoners from accessing justice.

Legal limbo
Being held on remand awaiting trial is a particular kind of limbo. Being unconvicted, yet treated in almost every respect as a convicted prisoner, is an experience that at any time around 10,000 people in England and Wales are having.

Strict limits on the timing and frequency of visits from legal representatives, as well as often very limited access to case papers, recorded interviews and prosecution evidence, means that many remanded prisoners play little or no effective role in preparing their own defence.

It could be argued that simply by the fact of having been remanded, the ability of any defendant to effectively defend themselves has been compromised. As our crisis-hit prisons have reduced so-called association time, so inmates have found that their opportunities to use payphones on the wing to telephone their solicitors have been severely reduced. Access to a phone for 10 minutes outside office hours (usually in the evening or at weekends) leaves little chance for prisoners to maintain contact with their legal team.

For a minority of people in prison their first struggle will be to appeal against either sentence or conviction. Playing a meaningful part in the preparation of any appeal is subject to similar limitations to those faced by people held on pre-trial remand. Access to legal books in the prison library may be limited to as little as 20 minutes a week due to severe staff shortages.

In theory prisoners who are on remand or on appeal are supposed to have access to non-net- worked laptop computers. In reality, as most prisoners will confirm, such facilities exist only on paper. As a prisoner who was on appeal during my entire two years in custody, I never once managed to access a computer for legal work. Everything had to be handwritten and sent by post – a virtually impossible task for the functionally illiterate inmate.

Aside from preparing for court cases, the life of the average prisoner also involves a struggle for access to justice at a much more mundane level. Every aspect of life behind bars is regulated by the PSOs and PSIs issued by the soon to be abolished National Offender Management Service (NOMS). These dictate what are and aren’t disciplinary offences, what rights and privileges inmates may be granted and even what clothing can be worn or books read.

The regulatory framework is so complex that most prison staff will readily admit that they have never actually read the majority of PSOs or PSIs, let alone the copious local ‘notices to staff ’ an notices to prisoners’ that every senior management team issues on a regular basis. The overall consequence of having thousands of pages of rules is that the vast majority of inmates, and most staff members, live their daily lives oblivious of these until a prisoner has actually committed what is considered to be a disciplinary offence.

Ignorance of the rules, however, is never accepted as an excuse. In lieu of easily accessible rules and regulations, many prisoners simply rely on word of mouth and local custom for guidelines about how to behave. Some offences are obvious crimes – such as assault or theft – however others may seem bizarre, such as it being a disciplinary offence for prisoners to lend or borrow any item amongst themselves. In theory this is to prevent bullying, but in practice the rule is routinely ignored until there is a cell search when the unauthorised item is found.

Any disciplinary offence in prison can result in a charge (known as a ‘nicking’). This leads to a formal hearing before a governor, yet the rules and procedures of these ‘mini-trials’ would be alien to anyone from the world outside.

Since former Lord Chancellor and Justice Secretary Chris Grayling scrapped legal aid for prisoners in December 2013, inmates facing internal disciplinary hearings have been mostly reliant on telephone advice from specialist charities such as the Prisoners’ Advice Service. These cuts were entirely politically motivated, or as Grayling himself remarked ‘ideological’.

The Ministry of Justice was determined to appear ‘tough’ on prisoners following a series of tabloid media articles slamming legal action by prisoners asserting legal rights or claiming compensation.

The result of such ‘ideological’ restrictions is that most prisoners, even those who are illiterate, with learning difficulties or suffering from mental illness, have no right to legal representation. Internal disciplinary hearings can be adjourned at the indi- vidual’s request for what is called ‘legal advice’, but in most cases this just means asking mates on the wing or one of the many inmate ‘legal experts’ who have been through the system themselves a fair few times. It’s the legal equivalent of ‘phoning a friend’.

Prisoners on a charge can request a ‘McKenzie Friend’ (usually this means someone who helps an unrepresented litigant in court and, in this con- text, means another inmate) to accompany them to the hearing to assist with their case, although this may or may not be granted at the governor’s discretion. Normal rules of evidence rarely apply and the presenting member of staff serves as both investigating officer and prosecutor. Needless to say, there is no defence counsel and no jury. Access to justice depends entirely on the sense of fairness and decency of the individual governor grade presiding over the hearing.

I served as a volunteer McKenzie Friend (i.e., a person without legal training who helps someone before a court or tribunal) at several establishments and in most of these cases the charges were dropped, either because the wrong disciplinary rules had been cited or correct procedures had not been followed. In a couple of cases the charge was found not proven when it became evident that the reporting officer had been less than honest about what he claimed to have witnessed.

These successes are not without risk. Effective McKenzie Friends easily become the target for members of staff who feel that their authority is being undermined.

Perhaps unsurprisingly, the vast majority of disciplinary cases are upheld. The role of the individual prisoner is essentially limited to offering mitigation, if any. Sanctions range from confinement to your cell for a number of days or weeks, as well as loss of specific privileges (access to gym or canteen) or withholding of prison wages for a set period. An appeal is possible, although so slow is the prison bureaucracy that the punishment has usually been served in full long before any appeal on paper has even been considered. There is no compensation for ‘wrongful convictions’, although the black mark can be expunged from the prisoner’s record.

More serious offences are likely to be remitted to an outside adjudicator – a judge – to be heard in a rather more formal setting. Such hearings can result in extra days being added to a prisoner’s sentence and in these specific cases it is possible to make an application for legal aid as the adjudication can materially change the terms of a custodial sentence. However, finding a solicitor willing to represent the defendant can be a tall order. In many cases, guilty or innocent, the inmate faces the court alone.

It is perhaps ironic that a justice system which arguably overuses custodial sentences (the UK imprisons a higher proportion of its citizens than any other country in Europe) seems institutionally designed to deny access to justice for prisoners once they are confined behind the high walls. It is undeniable that inmates who have literacy problems, learning difficulties or mental health issues are doubly disadvantaged when they are confined in a bureaucratic environment where vast books of rules and the written word serve to exclude any but the most fluent and well educated.

Justice in 21st century Britain seems to have become a fluid concept. We all know what it is and demand it for ourselves, yet in practice justice is often denied to the many – especially the poor and vulnerable – yet is sold at an unconscionable price to the few.