Proof magazine: The dark corners of our justice system

Proof magazine: The dark corners of our justice system

Prisoners return from their jobs to their wings for lunch at Wandsworth prison..HMP Wandsworth in South West London was built in 1851 and is one of the largest prisons in Western Europe. It has a capacity of 1456 prisoners.

The dark corners of our justice system

A prison officer checking on a cell at HMP Wandsworth. Pic by Andy Aitchison

Eric Allison is the Guardian’s prisons correspondent. In an article which appears in Proof magazine, issue 2 he explains why the Ministry of Justice won’t let him do his job. You can order the magazine here.

It may be thought that here in the UK, we have nothing to learn from the American penal system. After all, the ‘land of the free’ locks up more of its citizens than any country on earth and though it only accounts for just over four per cent of the world’s population, it locks up some 22% of the world’s prisoners. And convicts in America suffer appalling conditions, with many thousands entombed in solitary confinement for years, decades even.

However, there is one aspect of the US prison system the UK would do well to copy: the access it provides to the media. A thought occurred to me recently. I have been in many jails in England and Wales, both as a prisoner and since picking up the pen for the Guardian 13 years ago.

In my previous existence, I was regarded as a troublesome prisoner by my keepers and was moved around the system frequently. But I reckon I have seen the inside of more American jails than those in the UK’s system. Yet I have never set foot in America and never felt the urge to do so. 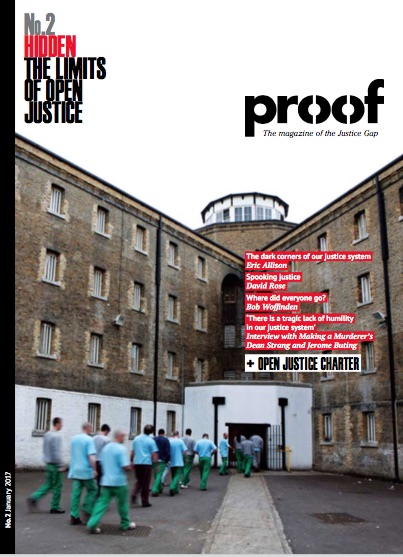 The envy of the world?
My knowledge of life in US slammers stems from the willingness of the prisons there to allow television documentary-makers to go behind bars seemingly at will. I have seen death row in several prisons, the obscene conditions in the Supermax facilities and the bedlam of county jails, the ‘front doors’ to the US penal system.

But here in the UK – where it used to be commonly asserted that British Justice was the envy of the world – television viewers are rarely allowed to see what goes on in our jails and journalistic access to prisons, though improved under Michael Gove’s recent tenure as Justice Secretary, is still severely restricted.

Does it matter, do we need to know? Absolutely. By and large, we know what goes on in most of our institutions. We can visit schools, hospitals, et al but our prisons remain largely out of the public eye. And it matters, because how we treat prisoners will have a marked effect on how they treat us, when they are set free.

When prisoners suffer abuse, beyond the abusive conditions so many are held in, they suffer it in dark corners, the only places where abuse flourishes. We should be shining a light on these places, only then can we guarantee our jails are abuse free.

Earlier this year, I was involved in the making of the Panorama programme which exposed the alleged abuse of children at the G4S run Medway Secure Training Centre (STC) Kent. A Guardian investigation in February this year revealed that the government and the Youth Justice Board, who oversee the detention of children, had been warned of the abuse by whistleblowers many years before, but no action was taken to investigate the serious allegations made.

I had been on Medway’s case for some six years before we ran the story. I had spoken to many children who had been detained there and the stories of abuse they had suffered, or witnessed, rang true. It was clear to me that the STC was not fit for purpose.

But we could not stand the story up, because we only had the words of the children and nobody listens to kids. Panorama sent an undercover reporter to Medway working as a guard. He had a hidden camera and recorded some disturbing footage; he shone a light, if you like. Only then was action taken.

I spoke at length with two former residents of Medway who both suffered appalling abuse there. They complained, many times, but nobody listened. Perhaps the most shocking revelation they made was that, though both spent long periods at Medway, they never once met the then director of the facility. It appears he did not meet the children placed in his care.

Shining a light?
Had journalists been allowed access to Medway and other prisons, it is unlikely the abuse would have continued for as long as it did. But no lights were shining on these dark corners of the system.

A stark contrast then to visit Spain and look at their juvenile detention system, as I did with a colleague, Simon Hattenstone in 2014. Since 1992, virtually all of the children’s prisons in Spain have been run by a not for profit charity Diagrama (Tough love: is this a model prison for children? November 7, 2014).

We visited two youth prisons, dubbed ‘re-educational centres’ and one secure children’s home, all run by Diagrama. In all three places, we were given absolute access. We chose the children we wanted to speak to and talked to them out of earshot of the staff. Diagrama offered to supply us with an interpreter, but did not object when we asked to take our own. There were no dark corners.

Compared to youth detention in the UK, Spain are light years ahead. Perhaps the most telling statistic that emerged from our visit is this: Diagrama has not had a single suicide in any of the centres it has run since 1992. At the time we wrote about Spain, 33 children under 18 had died in custody, in England and Wales and all but two had killed themselves.

I have a long list of prisoner sources across the spectrum of jails in this country. As a result, I have a blacklist of a dozen or so prisons and Young Offender Institutions, from where I receive regular accounts of abuse by staff. Can I report on it? No, because, at the moment, I only have the word of prisoners and, like the children abused in STCs, nobody listens to prisoners.

I am equally certain that prisoners are being abused in the jails on my blacklist. In February, David Cameron gave a speech in which he endorsed the reforms planned by the then justice minister, Michael Gove. He spoke of prisons, closed off by high walls and barbed wire and said it would be easy to adopt an ‘out of sight. out of mind attitude’.

David Cameron said he wanted there to be no ‘no-go areas’ in the system. In fact, the whole of the penal estate in England and Wales is a no-go area. Yes, cameras are allowed in occasionally, but always on Ministry of Justice (MoJ) terms. And I repeat, under Michael Gove’s stewardship, media access improved.

For example, in May,Wandsworth, one of the most troubled jails in the country, opened it’s doors to the BBC. It was a brave move; the cameras showed a prison in meltdown; violent incidents an everyday occurrence, more and more prisoners suffering mental health problems and drugs freely available. Granting access was a calculated move by the MoJ; brought on , I was told, to counter the ‘Holiday Camp’ bunkum, regularly dispensed by the tabloids. It did that all right, shining a light on the violence (up 31% according to figures published in July), the squalor and the tension.

Wandsworth, although once synonymous with prisoner abuse by staff, is not on my blacklist of jails, those where the evidence of abuse is consistently strong. Why can’t I – and other journalists – demand admission? Let us see the segregation units, the prisons within prisons, where abuse, if it exists, usually occurs. And the Close Supervision Centres, where those prisoners deemed to be the most disruptive in the system are housed. These are the darkest of dark corners and the source of so many disturbing reports.

The MoJ always deny reports of abuse, but I repeat, I have evidence. I am the prisons correspondent for a respected national newspaper. Let me do my job. If the system has nothing to hide, it has nothing to fear from a shining light.

Eric is the Guardian's prison correspondent

Our print magazine is Proof. Contributors include Michael Mansfield QC, Bob Woffinden, David Rose, Eric Allison and Ian Cobain.
Buy Proof Magazine
The latest issue (Why legal aid matters) includes Helena Kennedy QC and Martha Spurrier in conversation, David Conn on the legacy of Hillsborough - plus how to build your own law centre.
Eric is the Guardian's prison correspondent