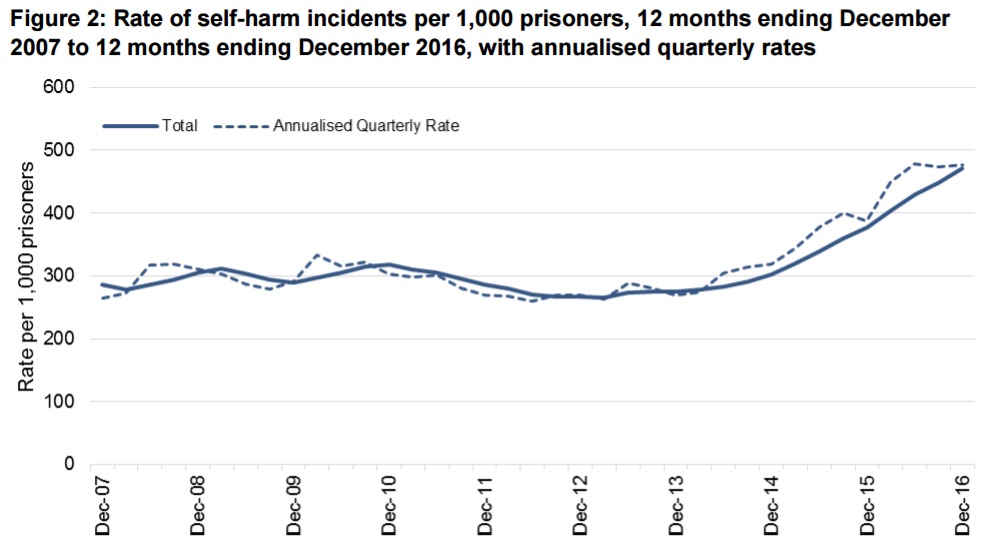 A total of 113 prisoners took their life through suicide in the last 12 months, according to the latest Ministry of Justice statistics confirming the scale of the problems concerning violence and mental health in our prisons. The figures, which detail alarming increases in deaths, suicides, assaults and self-harm rates, have prompted campaigners to call for prisons to be treated as central issue in the  general election campaign.

Self-inflicted deaths contributed to a total of 344 deaths in prison, a rise of 19% compared to the previous year and the highest number since the current recording process began in 1978. While partly attributable to an aging prison population, this number also includes three homicides, down from six the previous year.

The Ministry of Justice did not comment on the figures, citing the election period ‘purdah’. The Prisons and Courts Bill, which contains the government’s proposals for prison reform, is to progress no further this Parliament – see here.

The already alarming figures come in the wake of April’s Council of Europe report which reported ‘systemic and structural weaknesses in the documentation process’ of violent incidents behind bars in England in Wales. At HMP Doncaster, for example, the delegation witnessed incidents either not recorded or recorded in a fashion which undermined their severity. The report concluded that official figures ‘under-record the actual number of incidents and consequently fail to afford a true picture of the severity of the situation’.

The statistics have prompted calls for political parties to focus on deteriorating prison conditions as a matter of urgency throughout the current general election campaign. Deborah Coles, director of the charity INQUEST which investigates and supports those affected by deaths in custody, argued that these ‘shocking figures reflect the desperate reality of prison life characterised by suicide, self-harm and violence and the failure to protect those in its care. Prisons are places where the safety and dignity of prisoners is increasingly under threat’.

Coles added: ‘Politicians need to address this failing system and the associated economic and human costs. Until there is a dramatic reduction in the use of prison and a redirection of resources into radical community alternatives, then the death and harm will continue.’

One in five deaths in custody 'self-inflicted', reports…
The number of prison deaths up by 70% over last three months
Self-harm incidents for women in prison hit record high
Inquest to look at suicides HMP Durham following death of…
Watchdog calls on government to make prevent prison deaths…