‘Politically expedient and a blatant misuse of power’

‘Politically expedient and a blatant misuse of power’ 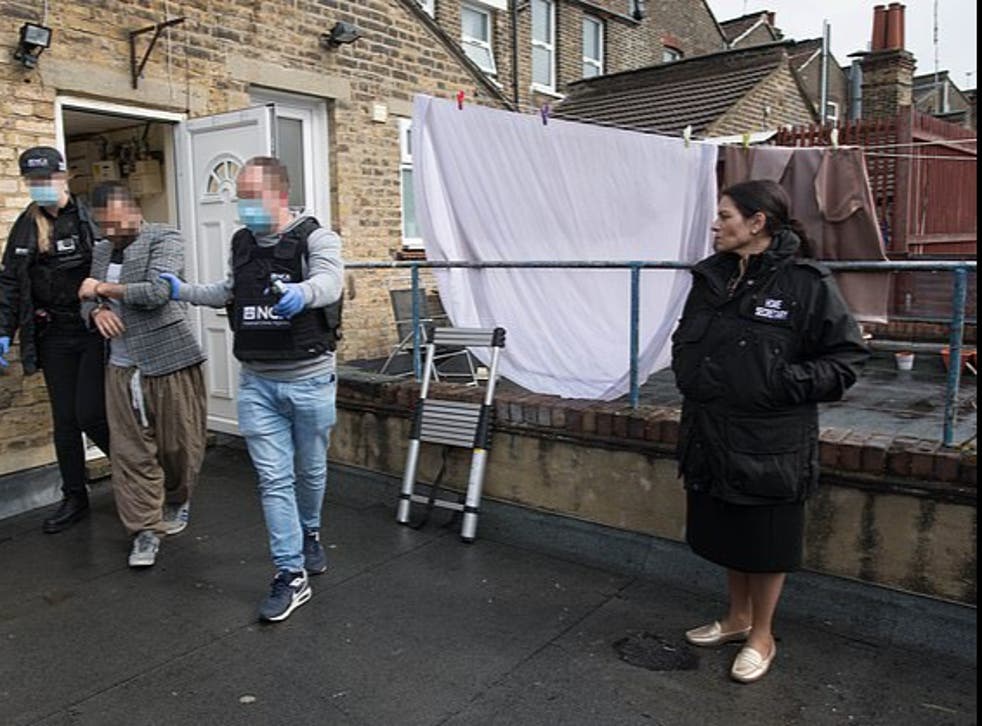 Last Wednesday, the National Crime Agency raided a house on the outskirts of east London, arresting two suspected ringleaders of a people smuggling gang. As the officers escorted the men from the house, a woman in a black, military-style coat watched on. If you didn’t look too closely at the title emblazoned across the coat, it would have been easy to mistake her for a supervising officer, albeit one with a less functional taste in footwear than most of her colleagues.

In fact, as anyone who saw the photos splashed across the weekends’ papers will know, the woman in question was the Home Secretary, Priti Patel, with her title stitched onto her coat-cum-uniform as though she was a ranking member of the force, rather than an elected politician holding high office.

Doubtless, if Patel was questioned on why she attended the raid in person, she would emphasise that she was there to watch the NCA in action, and to get a greater sense of one of the organisations ultimately under her command operated in the field.  Indeed, if this were the case, and the Home Secretary genuinely wanted to assess the NCA in the performance of their duties, or to learn more about the running of large scale operations, like last week’s Operation Symbolry, her attending the raid would be a completely understandable – even desirable – choice.  But this is not why Patel was in east London that morning.  If it had been her motivation, there would have been no need for her to play dress-up in a contrived uniform, or to brief to the press that she would be attending the raid, so that friendly editors in Fleet Street could send a cohort of photographers to get pictures of her in action.

Instead, her motivation was entirely venal.  For a Home Secretary desperate to portray herself as a powerful political force, and as one determined to stamp out illegal immigration, there is little more convenient than a series of photos of yourself in quasi-uniform set against the backdrop of officers marching out suspected criminals in handcuffs.  This is particularly the case when you are also making a major policy speech on  illegal immigration in the coming week, as Patel did this Tuesday, with the photographs complementing the rhetoric that she is a tough, engaged politician, willing to do what it takes to stop illegal immigrants.

But while such photographs may be politically expedient, they are also a blatant misuse of ministerial power.  Ministers are supposed to sit above the fray, setting the political agenda, deciding on policy, and drafting legislation, but without making operational decisions.  In any properly functioning democracy, the people need to have faith that authorities like the Metropolitan Police or the NCA are acting independently, making decisions on the basis of the evidence rather than on what may be politically expedient.  The presence of ministers at raids like that conducted last week subverts this, especially when they drape themselves in the regalia of the acting force.

The subversion of operational independence was also under scrutiny at the Grand Chamber of the European Court of Human Rights this week, which emphasised the need for there to be clear water between the political decisions of ministers and the operational decisions of the security services in Big Brother Watch et al v United Kingdom.

Here, the ECtHR was tasked with assessing how far the UK spy agency GCQH’s bulk interception of online communications were compatible with the European Convention on Human Rights, and found, in short, that it wasn’t.  Instead, such interception was found to violate citizens’ rights to both a private life and to freedom of expression (Articles 8 and 10, respectively), in part because the approval for the interception of any data was dependent upon the decision of the Home Secretary, rather than upon the decision of an independent body.

This decision concludes the litigation started by civil liberties campaigning groups like Liberty and Privacy International after Edward Snowden’s revelations in 2013 that millions of people in the UK, US and further afield were being eavesdropped on by GCHQ, MI5 and other parts of the UK’s national security apparatus.  The government’s basis for this intrusion into people’s private lives was the ‘war on terror’, with the rise of online communications hindering the security services from being able to effectively surveil the communications between criminals and would-be terrorists.  Indeed, this is an ongoing issue, with the security services warning that Facebook’s current plans to introduce ‘end-to-end’ encryption into its messaging services without entry points for security services would severely fetter their ability to target terror cells and check criminal activity.

In and of itself, few people are going to be concerned about the state scrutinising communications in order to uncover and prevent terrorist atrocities, and the Grand Chamber acknowledged the legitimacy of the government’s national security concerns, and the use of a bulk surveillance regime.  But while the ambition of governments like the UK may be noble, the means by which they sought to bring it about were less so.  Rather than having effective safeguards in place that ensured that genuinely suspect individuals could be spied upon, while the rights of innocent individuals are upheld, the legislation in question – the Regulation of Investigatory Powers Act 2000 (RIPA)  – gave carte blanche to the Home Secretary to authorise warrants, rather than a ‘body which is independent of the executive’.

Many of the flaws identified by the Grand Chamber have been resolved, with RIPA replaced in 2016 by the Investigatory Powers Act, or the ‘Snooper’s Charter’, as its critics have labelled it.  Crucially, this legislation checks the role of the Home Secretary, with any warrant authorised by her also needing the approval of a judge serving on the Investigatory Powers Commission, a body created by IPA to provide oversight on the use of the Act’s powers.   Yet this does not mean that the decision of the Grand Chamber is for nought.  It emphasises the need for there to be separation between government and the institutions that operate under its authority, while elements of the judgment are likely to have implications for how authorisations for surveillance under IPA’s current regime are made.

The actions of Priti Patel over the weekend show how ambitious, authoritarian-minded ministers can use the trappings of power to elevate themselves in the public eye, disregarding conventions like those forbidding politicians from wearing quasi-police uniform in favour of popular acclaim.  It is propaganda like this that paves the way for ministers to grant themselves ever more power, with the people persuaded that they are acting in pursuit of the public interest, not simply pursuing their own partisan agenda. There may be little that can be done to enforce conventions like government ministers not donning police uniform, but the decision of the ECtHR in Big Brother shows us how, when it comes down to substantive decisions that directly affect people’s lives, the courts are crucial in preserving our rights and civil liberties.