The Chief Inspector of Prisons yesterday reported on ‘a shocking worsening in standards’ at HMP Featherstone in Staffordshire since it last reported in 2013. In particular, Peter Clarke highlighted the plight of prisoners choosing to stay in their cells 24 hours a day for fear of attack over drug debts in the category C prison which holds 650 men.

It is the latest in series of disturbing insights into our prisons crisis that, whilst shocking, should come as no surprise. Concerns over Featherstone’s ‘self-isolators’ were raised in a report by the Independent Monitoring Board at the end of last year.

What little we know about the state of our chaotic and violent jails owes little to the press. As Alex Cavendish and Eric Allison both argued in the latest issue of Proof magazine, the government has effectively banned journalists from going into prisons.

So the role of the watchdog organisations that act as our ‘eyes and ears’ is increasingly vital. Independent Monitoring Boards (IMBs) are made up of unpaid members of the public who might give up two to three days a month of their time to assess life in prisons and immigration detention centres.

In theory, they have considerable powers. They can visit a prison at any time of day or night. Nowhere and no-one is off limits. Members can inspect the kitchens, the workshops and check out the availability of healthcare provision. They are free to talk to any prisoner they want and they can have those conversations in private. 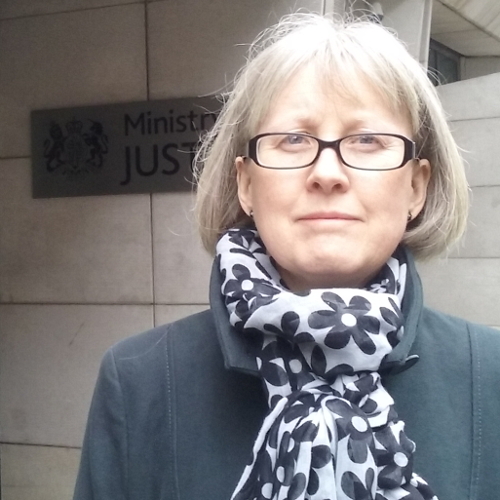 ‘Whistleblower without a whistle’: Faith Spear outside the MoJ

Earlier this year the prisons minister Sam Gyimah sacked the chairman of Hollesley Bay prison IMB after she was revealed to be the author of an article complaining that those extensive powers were largely illusory for the 2016 Prisons Handbook.

‘I am a whistleblower without a whistle,’ Spear wrote under the pseudonym ‘Daisy Mallet’. ‘I see so much going on around the prison estate, and not just where I work, that doesn’t add up,’ she continued. ‘At times it’s like having your hands tied behind your back because there is little you can do about it… . At times I want to ask staff what the hell are they doing or not doing. I want to be a voice, that is the purpose of my existence.’

What’s the point?
‘If no one takes any notice of what you’re saying. What is the point?’ Faith Spear says.

In an interview with www.thejusticegap.com, the 52 year old criminologist says: ‘We’re all volunteers. We don’t get paid. I was spending three days a week at the prison. The amount of paperwork you get, and the amount of knowledge you need is huge for a voluntary position.’

The prison minister, terminating her contract, accused Spear of having had ‘repeatedly disclosed official, classified and other information, often in an inaccurate manner’. ‘You have not denied this and in doing so failed to comply with agreed policies and procedures. You have also failed to comply with the standards expected of public appointees,’ Gyimah wrote.

So what is the point of IMBs? At the end of last year, a couple of days after Liz Truss announced her prisons white paper, there was a riot at HMP Bedford and 230 inmates left their cells and took control of two wings for six hours. Two months earlier, the IMB took what it called the unprecedented step of writing to Sam Gyimah. It warned that staff shortages were ‘beyond crisis point’ and of the ‘alarming rise in prisoners attempting to hang themselves’.

A couple of months prior to the major disturbance at HMP Birmingham before Christmas, described as the worst since the Strangeways riot 26 years ago, again the local board warned the MoJ of the prospect of trouble ahead. ‘Many staff are concerned for their personal safety as well as for the safety of prisoners and how to deal with the next ‘mamba attack’. A solution is required urgently,’ it wrote.

In relation to Featherstone, the prison inspectorate in 2013 made 68 recommendations, of which just 16 had been acted upon. Last week Prisons and Courts Bill promises to increases the powers of the prisons inspector to trigger an urgent response from the government.

So what’s the problem with IMBs? ‘The Ministry of Justice says that they are the “eyes and ears” for the Secretary of State. The problem is you only really have any contact with them when you write the annual report,’ says Spear. ‘The IMB cannot change any policy. If you address any issue, you send the questions in the annual report to the Secretary of State and it’s sent back to the governor who answers the questions and sends it back to the Secretary of State. Nothing changes. The IMB isn’t set up in way that it will ever affect any change. Whatever you report upon it’s simply filed away somewhere in the archives.’

Faith Spear’s frustrations are widely felt. A 2014 review of IMBs by Karen Page Associates found that many members identified ‘insufficient influence’ over policy and regimes as ‘a key frustration’. ‘It was not enough to efficiently report issues (be the “eyes and ears”), members expected this to be a catalyst for change,’ it said. ‘To some extent they may have been over optimistic about the extent to which they could have a direct impact.’

It also noted that the IMBs ‘did not have enough credibility with key stakeholders to be seriously influential’. The report called for ‘urgent root and branch review and reform’ of both governance and arrangements.

Faith Spear is a trenchant critic of IMBs. She has concerns about the lack of diversity on boards and poor recruitment practices. For example, she points out that board members should not be recruited via a notice in the local bowls club as they were in her area.

But she also insists: ‘I never wanted to raise my own profile.’ How was her identity revealed? ‘I don’t know. I just got a phone call from the vice chairman of the board to say that I had been identified as the author of the article and I have to give a statement of the next board meeting.’

Spear became chair of Hollesley Bay prison IMB in October 2015 having been voted in by the board’s members. ‘I was really looking forward to it,’ she said. ‘I worked jolly hard with every member to get their support.’

After a meeting last April, the vice chair wrote to her saying that their unanimous decision was that she had to resign and, if she didn’t, they would no longer attend meetings which she headed up.

It was her or them.

Now Sam Gyimah has written to her to ‘terminate’ her contact. Spear has been banned from sitting on any IMB for five years.

The treatment of Faith Spear seems unnecessarily harsh and unhelpful in terms of contributing to a wider debate about the role of IMBs. ‘I didn’t name anyone or any prison. It was the issues that needed to be out there,’ she says.

In the ten weeks between the IMB letter alerting the MoJ to the brewing crisis at Bedford and the rising incidents of self harm and suicide, two prisoners were found hanged.

In a subsequent article for the Guardian, a serving board member Christopher Padfield called the response from Sam Gyimah little more than ‘a pat on the head‘. According to Padfield: ‘In effect, he was saying: “This is a prison! If you can’t stand the heat, keep out of the kitchen. Sorry to hear that it has made you anxious.”’ Less the two weeks later, there was a riot.

A real privilege
Faith Spear wrote her article in response to the editor of the Prisons Handbook, Mark Leech who wanted to know why IMBs never did night visits. According to ‘Daisy Mallet’, IMBs used ‘the excuse’ that there would only be a skeleton staff on duty and, if there was trouble, they would be held responsible.

‘I tried to encourage everybody to go to the prison at weekends and go in the evenings but after a certain time there are very few staff,’ Spear explains. ‘The governor told me that I could not come unannounced. He said even he couldn’t just turn up. You are very limited in what you can do. Your hands are tied.’

Given the constraints, what did she get out of her volunteering? ‘I always made sure that I had equal or more time for the prisoners than I did for the staff,’ Spear continues.  ‘Often they would see you walking around and they just wanted to talk to you. I thought was great. It was a real privilege to be in that position.’

How would she describe Hollesley Bay, a category D open men’s prison in Suffolk? ‘It is a fairly well run prison but it’s absolutely in the middle of nowhere,’ she says. ‘There really isn’t enough purposeful activity going on.’

The prison is remote, 20 miles outside Ipswich with poor public transport links that make visits difficult and expensive. ‘There are a lot of wasted lives. There isn’t enough for prisoners to do, especially if they have a brain. It might have taken them years to get to cat D status. They don’t want to just be stuck with nothing for them to do.’

Clearly Faith Spear isn’t going to be silenced. ‘We really should not be surprised by what is going on in our prisons,’ says Spear. ‘It is the taxpayer that is paying for all this. The taxpayer has a right to know. I only put things out in the media because I felt it was in the interests of the public.’

One in five prisoners out of their cells for less than two…
HMP Erlestoke: Prisoners held in cells without running water…
Use of segregation post-lockdown at HMP Whitemoor…
More than half of prisoners at HMP Doncaster 'doubling up'
Prisoner goes seven months without shower at HMP…