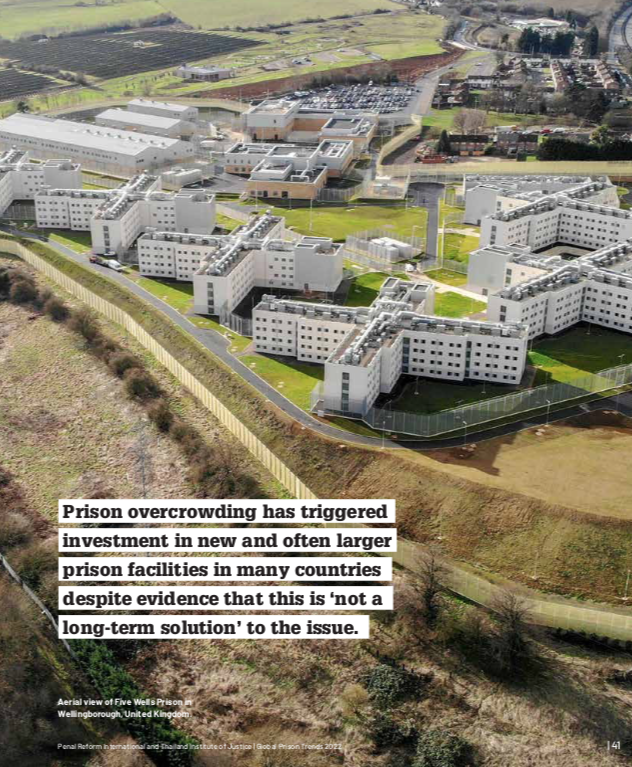 Over the last year 24 countries announced plans for or started building new prisons facilities creating at least 437,000 more spaces worldwide. The extent of this global trend is revealed in a report published today by the Penal Reform International (PRI), together with the Thailand Institute of Justice. Despite calls to reduce prison numbers over concerns about the pandemic on vulnerable prisoners, the group reckoned the global prison population had hit an all-time high with an estimated 11.5 million people in prison worldwide and some 119 countries operating above their official prison capacity including 11 with occupancy levels higher than 250%. 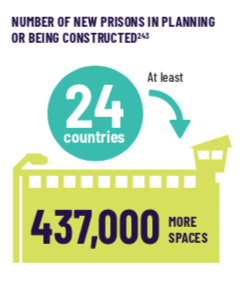 In February our government confirmed plans to ‘deliver the biggest prison-building programme in more than 100 years’. ‘Our unprecedented prison-building programme is the largest in more than a century and will deliver an additional 20,000 prison places by the mid-2020s,’ said the Lord Chancellor Dominic Raab. The PRI note that the prison population in England and Wales has ‘almost doubled in 25 years’ and reports, on government projections, there will be a further increase of just under 100,000 places by 2026, as a result of the recruitment of an extra 23,400 police officers.

‘With overcrowding in prisons affecting every corner of the world it is clear that no government can build their way out of this problem,’ commented Olivia Rope, the PRI’s executive director of Penal Reform International. ‘The human rights of people in cramped conditions are at even greater risk with the combination of increasing violent conflicts, the impacts of climate change with disastrous natural hazards and extreme temperatures coinciding with the ongoing global COVID-19 pandemic. The solution is clear and well-evidenced – rather than expanding prison capacity, we need an expansion in the availability and use of alternative sanctions that decrease prison numbers, coupled with decriminalisation and depenalisation of certain offences.’ 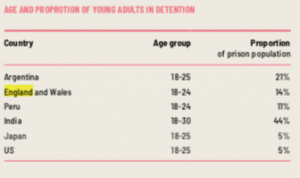 The PRI highlight the large proportion of the the prison population comprising young adults in England and Wales – see table. The report reports that studies have found that children and young adults ‘often come from backgrounds involving violence, abuse and exploitation’ and, for example, 45% of the children and young adults in a youth justice centre in New Zealand had been ‘in child protection and came from backgrounds of trauma and neglect’. It continued: ‘The experience of young women coming into contact with the criminal justice system in England and Wales is also frequently underpinned by experiences of violence, abuse and exploitation, poor mental health, addiction, exclusion from education, poverty and having no safe place to call home.’

Some countries, the PRI say, are ‘explicitly following’ an ‘American model’ of massive prison complexes. In Egypt, the President announced last September that an ‘American-style’ mega prison will soon be opened with a reported capacity of 30,000. In Turkey, the floorspace of new prisons constructed after 2016 has reportedly increased by an average of 50%, compared to the period between 2012 and 2016 when the failed coup took place.

According to PRI, Turkey accounts for more than half of the 437,000 new spaces, and Sri Lanka one fifth, with both countries adopting US-style mega prisons. The report also identifies a general trend towards bigger prisons in ‘more remote locations, which can limit the availability of services and the ability of families to visit their loved ones in prisons far away’.

The PRI notes: ‘A movement to reverse this trend of large prisons in favour of smaller prisons is garnering support. In Europe, a network of organisations, Rescaled, is advocating for a shift away from prisons to the concept of small-scale detention houses. Support centres around the growing body of evidence that prison architecture and design is critical to achieving humane treatment of people imprisoned and achieving positive outcomes.’

Almost 4,000 prisoners have died as a result of COVID-19…
Global prison population passes 11 million as Covid-19…
Prison population expected to hit 99,000 in five years
More than 400,000 people are locked up pretrial every single…
UK prisons have one of highest suicide rates alongside…